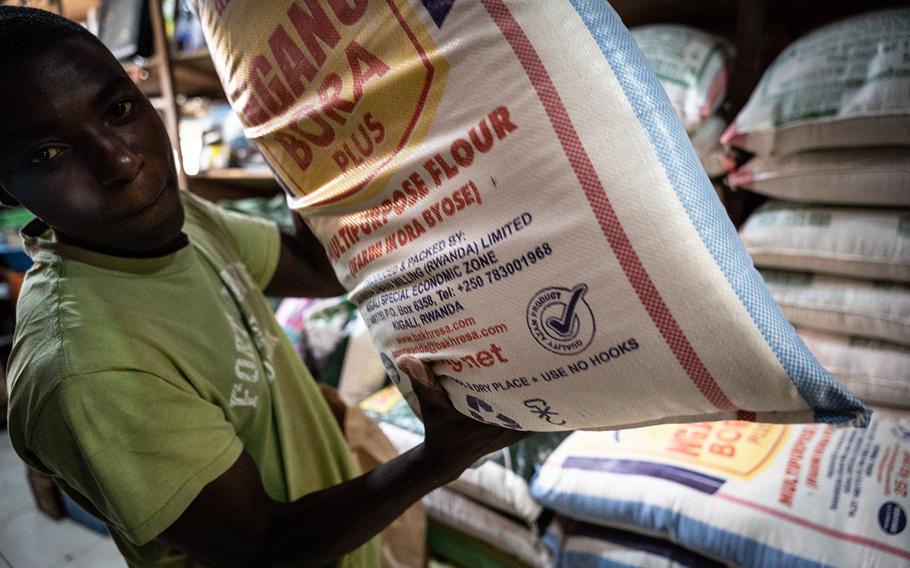 A man poses with a bag of wheat flour at a shop in Kigali, Rwanda, on March 23, 2022. The price of wheat flour has risen significantly, impacting the Rwandan market by Russia's invasion of Ukraine, as Rwanda imports 64% of wheat from Russia, according to the Rwandan Prime Minister. (Simon Wohlfahrt/AFP)

(Tribune News Service) — President Joe Biden and the leaders of top U.S. allies are exploring how to keep Russia’s invasion of Ukraine from causing a spike in global hunger as the war increasingly disrupts supplies of wheat and other goods from a region known as one of the world’s breadbaskets.

The prospect of international food shortages is “going to be real,” Biden said Thursday at a news conference in Brussels after a G7 meeting that addressed the looming crisis, which could also spark political instability in poorer nations. Biden said he’s urging European and other nations to drop trade restrictions that could limit exports of food.

Russian President Vladimir Putin’s invasion last month has put at risk exports of wheat, corn, sunflower oil and other foods from Russia and Ukraine that account for more than 10% of all calories traded globally. In North Africa and the Middle East, which rely heavily on wheat from Russia and Ukraine, that percentage is even higher.

White House officials have held multiple discussions over the past week with national security, agriculture, development and Treasury officials to seek ways to prevent supply shortages and price hikes, according to people familiar with the conversations.

At the summit, Biden said he raised the possibility of a “significant major U.S. investment” in food and other humanitarian assistance. Biden also said he and Canadian Prime Minister Justin Trudeau discussed ways to boost wheat production in their countries and speed up exports.

The disruption of crucial food supplies has already prompted protests in Iraq over food price increases that government officials blamed on the Ukraine war. Egypt, the world’s biggest wheat importer, turned to the IMF for assistance Wednesday as food and fuel price surges put pressure on public finances.

The fallout is reminiscent of the last major spike in global food prices that became a catalyst for the 2010-2012 Arab Spring, which toppled long-ruling governments in Tunisia, Libya and Egypt. It also ignited Syria’s brutal civil war and the resulting refugee crisis in Europe.

In Egypt, where increases in the price of government-subsidized bread have been politically perilous, the cost of offsetting higher wheat prices will run $2.6 billion, or 0.6% of gross domestic product, according to estimates by Joseph Glauber and David Laborde of the International Food Policy Research Institute. In Yemen, a country that depends heavily on international assistance, the added cost will be about $840 million, or 3.6% of GDP.

Glauber, previously the U.S. Agriculture Department’s chief economist, said the world has enough wheat and other grain in storage to avert shortages but tapping into reserves will only drive up costs. The USDA estimates the world has enough wheat from prior harvests to cover about a third of annual consumption, with some of the stockpile held by private traders and some by governments.

The Biden administration is calling on nations with government reserves to donate to UN humanitarian efforts, a U.S. official said. And driven by higher world prices, Australia and India are expected to increase their wheat exports, which would offset half the loss from Ukraine and Russia, according to a U.S. Agriculture Department forecast.

“This isn’t a question of running out,” Glauber said. “Stocks will be drawn down to a lower level and you’re going to see higher prices.”

Still, cost increases stemming from the war and resulting sanctions on Russia will — without action — push more than 40 million additional people into extreme poverty, defined as subsisting on less than $1.90 a day, according to an analysis published last week by the Center for Global Development, a non-profit think tank whose funders include Bloomberg Philanthropies.

The war’s impact comes on top of economic strain the COVID pandemic has put on the world’s poor, particularly in Africa and Asia. A United Nations index of global food prices is up more than 40% over the past two years.

“In the short term, for 2022, it might be in the low billions; in the longer term a lot depends on how far grain production in other countries adjusts to compensate,” Lowcock, now a fellow with the Center for Global Development, said in an email. “These problems could turn out to be long lasting and ugly.”

The food shock in Ukraine looks devastating. Grain and sunflower oil in storage from last year’s harvest can’t be shipped because of fighting and port closures. Shelling and fuel shortages may interfere with spring planting and fertilizer farmers need to apply to the winter wheat crop as it emerges from dormancy. Infrastructure damage, labor shortages and continuing conflict could also compromise the summer harvest and transportation of whatever is produced.

Efforts by governments to hoard food could worsen the situation. Hungary, Argentina, Turkey, Serbia and Egypt have all imposed or threatened limits on food exports. Russia has limited exports of grain to some formerly Soviet countries in what may be an attempt to control domestic food prices.