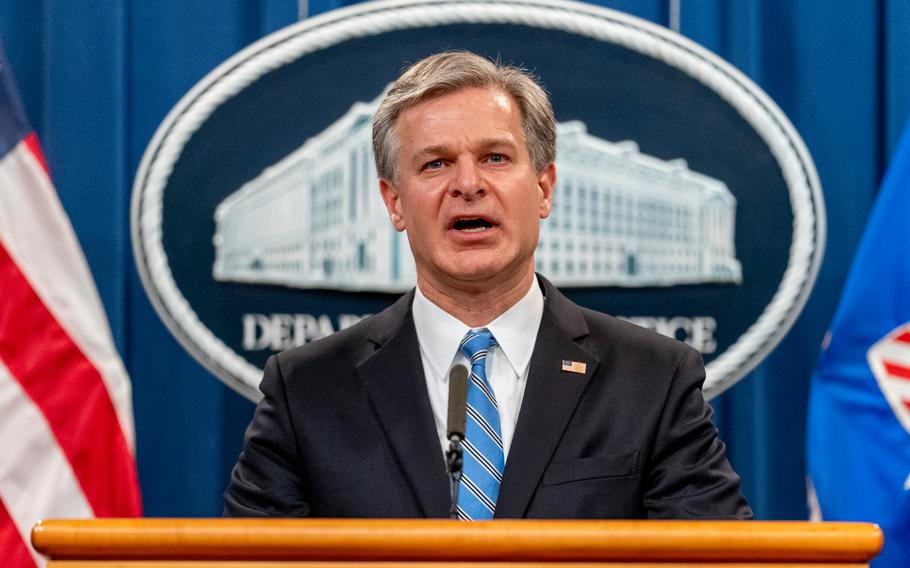 FBI Director Christopher Wray speaks at a news conference at the Justice Department in Washington, on Nov. 8, 2021. (Andrew Harnik/AP)

The FBI is trying a novel strategy to recruit Russian-speaking individuals upset about the country’s invasion of Ukraine: aiming social media ads at cellphones located inside or just outside the Russian Embassy in Washington.

The ads, which appear on Facebook, Twitter and Google, are carefully geographically targeted. A Washington Post reporter standing next to the embassy’s stone walls on Wednesday morning received the ad in their Facebook feed. But the ads did not appear in the feed when the reporter stood on the other side of Wisconsin Avenue NW, in the District’s Glover Park neighborhood.

The ads are designed to capitalize on any dissatisfaction or anger within Russian diplomatic or spy services - or among Russian emigres to the United States - over the invasion of Ukraine, an event that counterintelligence experts call a huge opportunity for the U.S. intelligence community to recruit new sources.

The unlikely star of the ad is Russian President Vladimir Putin, whose own words are used to encourage people working in or visiting the embassy to talk to the FBI. The ad quotes Putin at a meeting last month where he publicly chastised his intelligence chief, Sergey Naryshkin, correcting the spy boss’s position on Russian policy toward the separatist eastern regions of Ukraine.

Naryshkin, the director of Russia’s Foreign Intelligence Service, or SVR, stammered at the meeting and seemed unsure of what Putin wanted him to say.

The FBI’s ad quotes Putin saying, in Russian, “speak plainly, Sergey Naryshkin,” reminding any SVR officers working at the embassy that Putin humiliated their boss. The FBI then uses Putin’s words to make its own appeal - also in Russian: “Speak plainly . . . We’re ready to listen.”

Text running above the ad says: “The information provided to the FBI by the public is the most effective means of combating threats. If you have information that could help the FBI, please contact us.”

Peter Lapp, a former longtime FBI spy-hunter who now works as a private consultant, praised the ads as a clever and sophisticated use of new technology to conduct old-fashioned recruitment.

“It’s a brilliant recruiting strategy, because I think there’s probably a lot of folks within the Russian government that are incredibly dissatisfied with Putin’s war, and therefore it’s a great opportunity to see if any of those dissatisfied people could help us understand Putin’s intentions better,” Lapp said. “It’s also nice to see the FBI using 21st-century technology to do this, since the FBI is not usually known for its technological advances.”

The recruitment effort could have an additional benefit for the never-ending spy-versus-spy games in Washington, Lapp said.

There’s little doubt the Russian Embassy staff, including its intelligence officers, are aware of the ads, which feature a link to an FBI website for more information about how to contact agents. Russian intelligence officers will probably have to spend some of their time looking into anyone whose phone visits that website, he said.

“Russian counterintelligence officers are currently in an all-hands-on-deck mode to make sure their folks don’t stray, and that they are keeping an eye on their own officers to make sure that no one goes rogue,” Lapp said. “This will probably cause those folks to work even harder than they are already working, and they may end up chasing ghosts, things that aren’t there, and spend time doing this. That in and of itself is a counterintelligence success for the FBI.”

Anyone who clicks on the recruitment ad is steered to a webpage of the counterintelligence program of the FBI’s Washington Field Office, where they are encouraged in both Russian and English to come to that office in person if they want to talk.

The “best intelligence” on foreign spy activity comes “through information provided by the public,” the webpage says. “The information you provide will be handled in a confidential manner, and our interactions with you will be professional and respectful.”

The Russian Embassy did not immediately respond to a request for comment.

In a statement, the FBI said Russia “has long been a counterintelligence threat to the U.S. and the FBI will continue to adapt our investigative and outreach techniques to counter that threat and others. The FBI would like to speak to anyone who can help us minimize those threats and keep our country safe.”