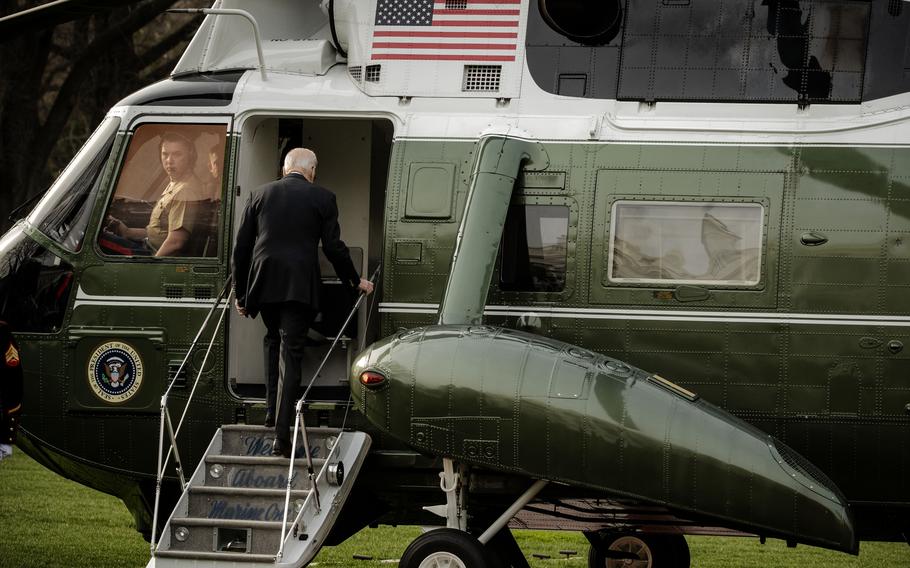 President Joe Biden boards Marine One on Wednesday as he begins his trip to visit with NATO, the Group of Seven and the European Council. (Bill O'Leary/The Washington Post)

BRUSSELS — President Joe Biden and European leaders are expected to announce a major initiative to direct shipments of liquefied natural gas to Europe during his visit to Brussels this week, part of a broader effort to help reduce Europe’s dependence on Russian energy, according to three U.S. officials familiar with the plan.

The announcement, a dramatic effort to deprive Russia of leverage as it continues to batter Ukraine, would mark an unusual move to reorder the world’s energy flow - a shift that could have an impact long after the war is over. It comes as European officials have asked the United States to do more to help them cut their reliance on Russia for oil and natural gas.

Biden is also expected to use his stop in Brussels on Thursday and Friday - where he is meeting with NATO, the Group of Seven and the European Council - to announce additional sanctions against Moscow, as well as a crackdown on evasions of the current sanctions.

The sanctions are expected to hit numerous members of Russia’s parliament, defense companies and subsidiaries, and additional sectors of its economy, according to two people familiar with the matter, who spoke on the condition of anonymity to describe matters not yet made public. They cautioned that planning was fluid and subject to change.

Taken together, the expected actions by America and Europe amount to an escalation of the sweeping push by a U.S.-led coalition of democracies to punish and deter Russia as it pursues its war against Ukraine. The past four weeks have seen a nearly unprecedented coalescence of democratic countries to impose costs on a belligerent foe and provide aid to its victim.

The initiative to ship liquefied natural gas, or LNG, whose details have yet to be finalized, will come Friday when Biden meets with European Commission President Ursula von der Leyen in Brussels before departing for Poland.

Speaking to European Union lawmakers in Brussels on Wednesday, von der Leyen said that all E.U. members “can contribute in reducing our dependency on Russian gas” and said it was a topic she planned to take up with Biden on the first day of his visit Thursday.

“Tomorrow, I will discuss with President Biden how to prioritize LNG deliveries from the United States to the European Union in the coming months,” von der Leyen said. “We are aiming at having a commitment for additional supplies for the next two winters.”

Jake Sullivan, Biden’s national security adviser, said Wednesday that Biden would make an announcement Friday with the European Commission, the E.U.’s executive body, regarding efforts to reduce reliance on Russian energy, but he declined to provide details.

Sullivan said the goal of helping Europe reduce its reliance on Russia is “a major priority,” adding that the U.S. is already diverting cargoes to increase the supply of gas to Europe.

Some of the new sanctions Biden will announce Thursday will be directed against Russian lawmakers, a U.S. official said, a move that Ukrainian President Volodymyr Zelensky requested when he addressed Congress in a video speech earlier this month.

“We propose that the United States sanctions all politicians in the Russian Federation who remain in their offices and do not cut ties with those who are responsible for the aggression against Ukraine, from State Duma members to the last official who has lack of morale to break this state terror,” Zelensky said. The State Duma is one of the chambers of the Russian parliament.

But Biden is holding some of his options for sanctions in reserve. The U.S. has not moved forward with sanctions against prominent Russian oligarch Roman Abramovich, for example, because Zelensky asked the United States not to do so, according to a person familiar with the matter.

Zelensky advised that Abramovich may be helpful in negotiating a peace deal with Russia, the U.S. official said, who spoke on the condition of anonymity to describe private conversations. Zelensky’s request was first reported by the Wall Street Journal.

As Russia’s invasion of Ukraine sparked international efforts to punish powerful people with ties to Russian President Vladimir Putin, Abramovich announced last month that he was handing over “stewardship” of his London soccer club, Chelsea FC, to the team’s charitable foundation. Members of the British Parliament urged him to give up his assets, and Abramovich put the club up for sale earlier this month.

Europe remains heavily dependent on Russian gas exports to power its economy, with Russian energy comprising as much as 70% or 80% of the fuel supply in some eastern European countries. The European Commission presented plans earlier this month to cut Russian gas imports by two-thirds this year, but that effort remains aspirational amid logistical challenges to diversifying Europe’s energy sources.

Most experts believe that Europe remains years away from being able to depend on renewable energy production, creating a short-term demand for traditional energy sources. U.S. production of LNG - natural gas cooled to a much smaller volume so it can be shipped - has emerged as an obvious potential stopgap, but it will be difficult to get enough LNG to make up for a dramatic drop in Russian energy production.

The United States already has buyers for the overwhelming majority of its existing LNG production, which suggests there may not be much additional volume for the Europeans to buy. And Europe lacks the needed infrastructure - particularly the pipelines and other tools to distribute the gas once it arrives there - to absorb large amounts of additional LNG imports.

America and its European allies could offer financing options to encourage private investors to accelerate the building of more “liquefaction” plants in the U.S. that would then export more LNG, experts said.

“They’re very expensive and they’re very energy-intensive,” said Bob McNally, president of Rapidan Energy Group, a consulting firm. “You don’t throw those things up like a soda stand. You have to know what you’re doing. The U.S. and Europe could subsidize the capital cost to help get it done faster.”

Energy experts have also discussed whether some of the LNG currently being shipped to Asia could be directed to Europe instead - a potential solution with the downside that Asian countries may then turn to reviving their coal plants, in a potential blow for global emissions targets.

“There’s an immediate need to make sure in coming winters Europe can keep the lights and heat on without as much Russian gas or none at all, and that can’t be done with renewables alone,” said Jason Bordoff, founder and director of Columbia University’s Center on Global Energy Policy. “Europe does need to make sure it’s investing in infrastructure to diversify its natural gas supplies, and there’s steps the U.S. can take to facilitate that, particularly for the lower-income countries in Europe.”