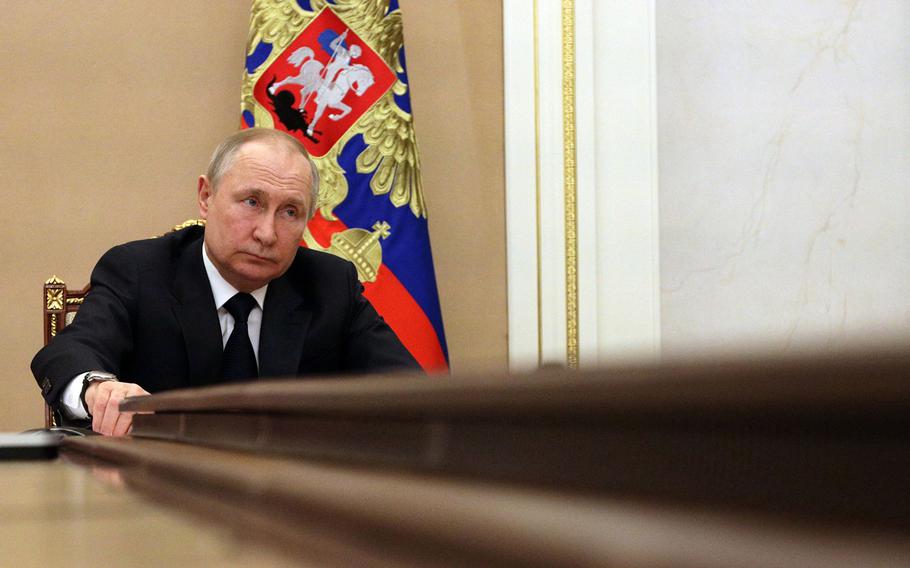 Few Americans have parsed Russian propaganda on its various platforms like Maxim Pozdorovkin.

The Russian-born, Harvard-educated filmmaker and thinker is behind several works on the subject, most notably “Our New President” from 2018, an award-winning documentary deconstruction of the Russian media’s portrayal of Donald Trump’s election that was, as he puts it, “a movie based entirely on actual footage without a single true statement in it.” He also examined the resistance to such media messaging in “Pussy Riot: A Punk Prayer,” a nonfiction film on the political collective.

Far from just an attempt to negate discontent over its Ukraine invasion, Russia’s current state-media approach is, in Pozdorovkin’s view, a continuation of a decade-long campaign to warp Russian citizens’ view of the West. He argues the country’s population has been long primed for this moment -- seriously lowering the odds for any tech company or foreign outlet hoping to poke through the veil.

The Washington Post spoke to Pozdorovkin by phone from his home in Brooklyn, where he now lives. The conversation has been edited for brevity and clarity.

Q: You’ve been very vocal in your work that there’s been a whole narrative about America playing out in Russian media that most Americans aren’t aware of. What exactly has been happening?

A: I don’t think Americans fully understand what’s been fed to Russians about the U.S. and the West for literally the past decade. It’s been an information war -- a totally one-sided information war -- and it has been waged so fully and artfully that it’s made a lot of what’s happening now preemptively possible. What this information war boils down to is this: “The West is completely against us and trying to stifle and destroy our way of life.” It’s a simple message. But people are told this over and over, in so many different ways.

Q: And Trump fits neatly into this --

A: Trump fits neatly into this because Trump was the one American leader who wasn’t trying to destroy the Russian way of life.

Q: And in their eyes that’s what caused the U.S. backlash to him.

A: That was the one and only reason.

Q: What effect does this have? Like you said, it’s not like the U.S. or Europe has done much to really feed this narrative.

A: It’s true, the Russian media has been totally shadowboxing for years; no one was fighting back. But that doesn’t really matter. If you ingrain this message of victimhood so completely, what it does is when there’s any kind of [President Vladimir] Putin aggressive action, as there is now, a lot of people in Russia don’t see it as aggressive -- they just see it as standing up for their way of life. That’s why the nuclear threat computes.

Q: Because it’s not viewed as much as saber-rattling as “look at what you made me do.”

A: Exactly. “We don’t want to take the nuclear option. But what choice do we have? You tried to destroy our way of life.”

Q: How broadly does this apply in Russian society, in your research? Many Americans have the feeling, perhaps naive, that there’s a generational split here. An older audience that remembers the Cold War and is more likely to watch state TV may think this way. But a younger generation that doesn’t remember it and is also tech-savvy won’t. Technology and the until-recently open Internet must have some role to play here, no?

A: I think that depends on the level of willful agency people have. For some younger Russians, yes. But it’s getting so much harder to get this information. You have to take action. There is [independent online news service] Meduza, which is based abroad, and Bellingcat and the other leaks about the war. But you have to know where to look; you can’t go to any old site. You have to know how to work a VPN, which a lot of people don’t. Or they’re afraid to. People used to just turn on [liberal radio station] Echo of Moscow or [independent TV station] TV Rain. And now they’re shut down or preemptively closed because of the new censorship law.

Q: But isn’t that a sign that the information war is not working? If you’re such good propagandists, you shouldn’t need to shut down independent outlets -- your propaganda should just counter it, shouldn’t it?

A: I think it’s just about plugging all the holes in the boat. The propaganda has been working. But for those it doesn’t, this makes independent news that much harder to get.

Q: Where do tech companies fit into this? So many platforms, from Facebook to Twitter, have been cut off. But YouTube, for example, stays on. Can that help get independent media through? Alexei Navalny’s channel, for instance, now run by Leonid Volkov. Or other dissidents.

A: YouTube is problematic for Putin because it works both ways; [Russian censorship agency] Roskomnadzor can’t just cut it off. Because you have the Navalny channel, but you also have a lot of very popular Russian propagandists that the government would like to hold onto to reach younger people. And of course they can’t just remove one channel; once they allow it, they have to let it all in. So for now, they’ve decided to do that.

Q: So the idea of creating a full media blackout isn’t so simple.

A: I do agree this information whack-a-mole is a losing game. Shutting down one informational sphere causes it to pop up somewhere else. But it does make things harder each time. Russia will never become North Korea. But it’s getting closer to it.

Q: Does this fill-the-news-desert-with-propaganda approach work if people don’t have bread to eat, or their nephews aren’t coming home from battle? That would dwarf anything NATO is supposedly trying to do, wouldn’t it?

A: I believe 90 percent of people in Russia who think like victims just stick to their broad ideological coordinates. They don’t change their thinking that’s been so ingrained just because life is harder. They don’t connect the two.

Q: Or they blame the West.

Q: And that’s why the idea that harsh economic sanctions will make ordinary Russians call for an end to the war may be a fallacy.

A: Absolutely. What a lot of people may want in tough times is the opposite: They want a display of strength against the West. That’s what Putin and state media are all ready to serve up to them.

Q: So how do they do that? Is Russian state media -- are nightly programs on Vesti -- filled with bombed-out Ukrainian apartment buildings?

A: No, there’s not really any of that. They’re showing the attacking of military bases; that’s how they project strength. When you see Ukrainian civilians, it’s Russian soldiers helping elderly people, if they can somehow manage footage like that. It shows how they’re helping Ukrainians against the great threat of the West.

Q: Which is also part of the “reunification” narrative.

A: It fits very nicely into that. Reunify the people and save them from the “Nazi” government that is an instrument of the West. And that’s maybe when you’d see some bombed-out apartment buildings.

Q: Why would Ukrainians be bombing their own apartment buildings?

A: Does that matter?