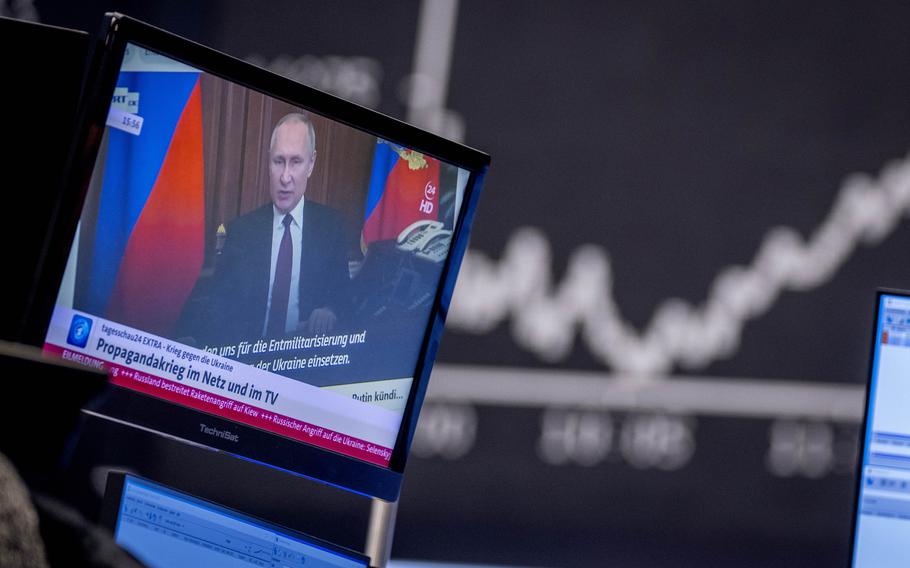 Russia’s President Vladimir Putin appears on a television screen at the stock market in Frankfurt, Germany, Feb. 25, 2022. Russia is revving up its sophisticated propaganda machine as its military advances in neighboring Ukraine. Analysts who monitor propaganda and disinformation say they’ve seen a sharp increase in online activity linked to the Russian state in recent weeks. (Michael Probst/AP)

Foreign holders of Russia’s sovereign bond maturing in 2029 are watching their accounts for the latest debt coupon from the sanctioned nation after the government said a $66 million payment had been made to its local depository.

The Finance Ministry said that the transfer to the National Settlement Depository meant it had met its obligations on the bond coupon “in full.” The debt also has a ruble-fallback option, which allows Russia to make the payment in its local currency, provided it meets certain requirements.

While the Finance Ministry cited a dollar figure in its statement Tuesday, Minister Anton Siluanov has warned repeatedly that Russia could be forced to pay in rubles if its access to foreign currency is blocked.

International creditors are closely monitoring the cash, even after a $117 million coupon payment went through last week, easing concerns about a potential sovereign default. Stringent sanctions and capital controls following President Vladimir Putin’s invasion of Ukraine have left it unclear whether international investors can access the funds if they’re transferred to local accounts.

JPMorgan Chase received and processed the payment after getting approvals from the U.S. Treasury Department, according to a person familiar with the matter, confirming a Reuters report earlier.

Unlike last week’s interest payments, this bond’s prospectus states that the coupon settlement will be done through Russia’s central securities depository and Euroclear, one of the world’s biggest clearing houses. JPMorgan declined to comment.

Billions of dollars of Russian government and company debt have been put in question after as much as two thirds of the country’s foreign currency reserves were frozen, as well as the overseas assets of numerous billionaires. Russia has at least $400 million of interest payments coming due over the next 10 weeks, as well as a $2 billion bond it must repay next month, data compiled by Bloomberg show.

Credit Bank of Moscow, a lender the Russian central bank has designated systemically important, said it fulfilled an obligation to make a $9.7 million coupon payment on its $500 million September 2026 bond. Two bondholders, who declined to be named as they aren’t authorized to speak publicly about the matter, said they had received payment.