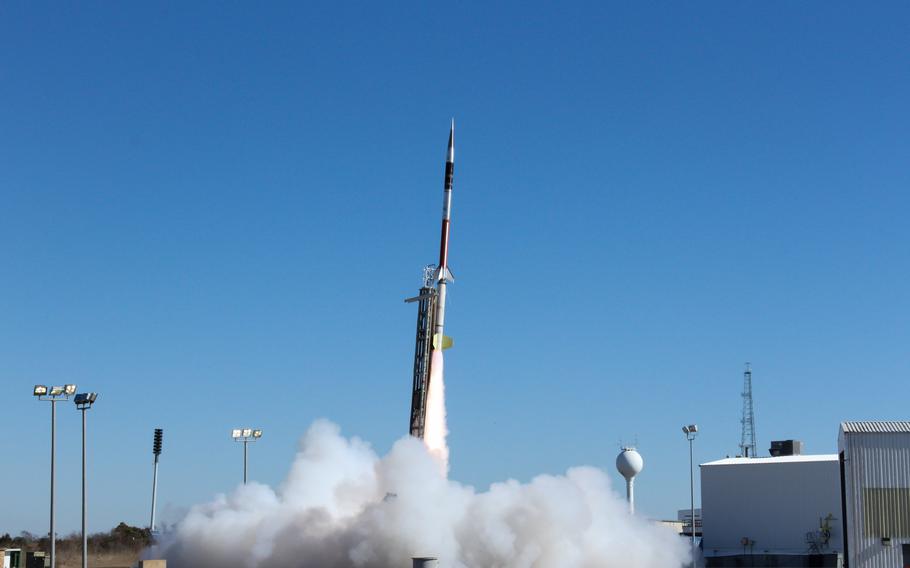 A sounding rocket is scheduled to launch from the NASA Wallops Flight Facility on March 21, 2022, between 7-10 p.m. ET. The mission for the Air Force Research Laboratory aims to increase understanding of flying vehicles in hypersonic conditions. (NASA)

(Tribune News Service) — If you see a small object streaking through the sky Monday night, March 21, it could be a rocket that is being launched from the NASA Wallops Flight Facility in eastern Virginia.

NASA officials say the rocket may be visible from parts of Delaware, Maryland, New Jersey, North Carolina, Pennsylvania, Virginia and West Virginia shortly after liftoff — scheduled for sometime between 7 and 10 p.m. Monday.

In case the launch gets postponed by weather conditions or other factors, NASA has backup dates set for March 22 through April 1.

NASA said the Terrier-Improved Malemute rocket, which is a type of two-stage suborbital sounding rocket, will be part of a mission overseen by the Air Force Research Laboratory/Air Force Office of Scientific Research. Sounding rockets carry scientific instruments into sub-orbital space for experiments.

“The purpose of the mission, called Boundary Layer Turbulence 2, or BOLT-2, is to increase the understanding of boundary layer transition, turbulent heating, and drag on vehicles flying at hypersonic conditions,” NASA said. “Boundary layer transition to turbulence is the process where smooth, laminar flow becomes unstable after which turbulence dominates and significantly increases heating and drag on high-speed vehicles.”

NASA says the best viewing locations will be in the Chesapeake Bay region, but the rocket may also be visible from other parts of the eastern United States.

Similar to other recent rocket launches, the NASA Visitor Center at Wallops will not be open for Monday’s rocket launch.

In case you live too far away to see the rocket, you can view the launch on a livestream video. Live coverage is scheduled to start at 6:40 p.m. Monday on the Wallops YouTube site. Launch updates will be available on the Wallops Facebook and Twitter pages.