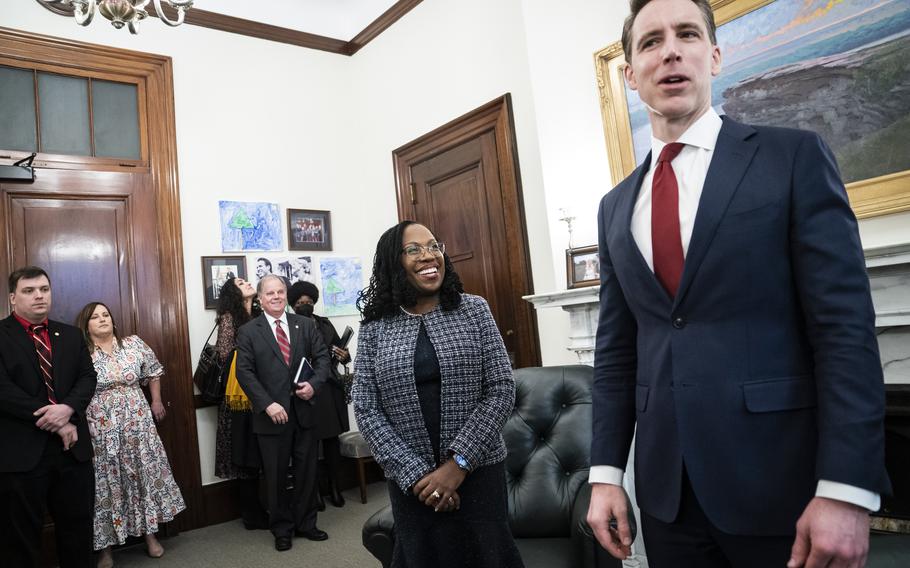 "The possession and distribution of child pornography is an extremely serious crime because it involves trading depictions of the actual sexual assault of children, and the abuse that these child victims endure will remain available on the internet forever."

But the picture that Hawley provides is a selective one that lacks significant context. He suggests that Jackson is out of the judicial mainstream with her sentencing of child-pornography defendants. But he ignores a long debate within the judicial community about whether mandatory minimums were too high. As a member of the U.S. Sentencing Commission, which is charged with reducing sentencing disparities, Jackson was intimately involved in that debate. Hawley selectively quotes from testimony, USCC materials and various court cases to make his case. Let's take a tour through his technique.

Taking Jackson's remarks out of context

Hawley mined USCC hearings for moments - shown in screenshots - when Jackson was repeating what witnesses said, suggesting these were her own opinions.

Here, she was asking a question in response to testimony that she found surprising: "I was surprised at some testimony with respect to the motivations of offenders, and that there are people who get involved with this kind of activity who may not be pedophiles who may not be necessarily interested really in the child pornography but have other motivations with respect to the use of the technology and the being in the group and, you know, there are lots of reasons perhaps why people might engage in this. And so I'm wondering whether you could say that there is a - that there could be a less-serious child pornography offender who is engaging in the type of conduct in the group experience level because their motivation is the challenge, or to use the technology? They're very sophisticated technologically, but they aren't necessarily that interested in the child pornography piece of it?"

(The witness answered that, over time, such people become more of a tribe and more-serious offenders.)

Hawley tweeted a response and issued a news release before the Washington Post had completed its fact check. Hawley denied he had taken her comments out of context.

What's missing here is that the USCC is bipartisan - no more than four members of the seven-member USCC can be from one party - and that the recommendations that Hawley criticizes were unanimous. One member who signed off on the report was Dabney L. Friedrich, later nominated in 2017 by President Donald Trump to be a federal district judge. Hawley was not in the Senate then, but every Republican supported her nomination.

Moreover, while the USCC recommended lowering the minimum in two types of child-porn offenses, it did not recommend eliminating the statutory mandatory minimum entirely.

"All child pornography offenses, including the simple possession of child pornography, are extremely serious because they both result in perpetual harm to victims and validate and normalize the sexual exploitation of children," the report said. But it said the Justice Department, defense lawyers and judges had raised concerns about the existing set of sentencing guidelines.

"Many believe that it fails to adequately differentiate among offenders based on their culpability and sexual dangerousness, needs to be updated to reflect recent changes in typical offense conduct associated with the evolution of computer and Internet technologies, and is too severe for some offenders," the report said. As a result, it said, prosecutors and courts were gaming the system, seeking ways to limit sentence exposure by, for instance, charging someone only with possession even if they had committed other related crimes. That's because there was no mandatory minimum for possession and a five-year minimum for receipt, transportation and distribution.

A 2010 survey showed 71% of judges said the mandatory minimums for receipt of images were too high. Moreover, in 2010 only 40% of convicted offenders for non-production - people who use existing images but do not make them - received sentences that matched the guidelines.

As a result, the commission suggested changes in minimums for non-production offenses, but not for people who make child pornography. It also recommended equalizing the punishment for possession and for receipt, transportation and distribution.

In 2013, the Justice Department's national coordinator for child exploitation prevention and interdiction - the department's expert on child pornography - wrote to the USCC and said the report was "an important step" in overhauling the sentencing guidelines. While disagreeing with some of the report's conclusions, especially on recidivism risk, the letter said the Justice Department "agrees with the Commission's conclusion that advancements in technology and the evolution of the child pornography 'market' have led to a significantly changed landscape - one that is no longer adequately represented by the existing sentencing guidelines. . . . The current guidelines can at times under-represent and at times over-represent the seriousness of an offender's conduct and the danger an offender poses."

Nevertheless, Congress did not act on the recommendations. In 2021, the USCC issued another report recommending again that the changes be implemented.

In a long section of the Twitter thread, Hawley compared various sentences handed out by Jackson with the recommended guidelines. The 2021 USCC report noted that in 2019, only 30% of non-production child-porn offenders received a sentence within the guideline range. "The non-production child pornography guideline has been subject to longstanding criticism from stakeholders and has one of the lowest rates of within-guideline range sentences each year," the report said.

So Jackson would not necessarily be out of line with other judges. "Less than 30% of all non-production cases get a Guidelines sentence because just about [every] federal judge realizes these Guidelines are too severe," tweeted Rachel Barkow, a former member of the USCC. "So KBJ is doing what most of the federal bench does."

Here is an examination of each of Hawley's claims about particular cases, with responses from a White House official.

Case in which Jackson met the guideline range

Cases in which Jackson met or exceeded the probation recommendation

Response: Jackson issued a sentence above probation's recommendation of 42 months.

Hawley: "In United States v. Cooper, in which the criminal had more than 600 images and videos and posted many on a public blog, the Guidelines called for a sentence of 151-188 months. Judge Jackson settled on 60 months, the lowest possible sentence allowed by law."

Hawley: "In United States v. Downs, the perp posted multiple images to an anonymous instant messaging app, including an image of a child under the age of 5. The Guidelines recommended 70-87 months. Judge Jackson gave him the lowest sentence allowed by law, 60 months."

Cases in which Jackson was below the probation recommendation

Response: The government and probation both recommended a sentence within the guidelines range (97 to 121 months). Her sentence was above what defense counsel requested.

In other words, only in two of the seven cases cited by Hawley did Jackson render a sentence that was below the probation office's recommendation.

Moreover, as noted in the quote at the top of the fact check, Jackson later refused to grant Sears compassionate relief for medical reasons. "Sears also admitted to doing more than just possessing and distributing generic and graphic depictions of child molestation," Jackson wrote in her opinion. "In addition, Sears also provided photos of his own prepubescent female relative to the undercover officer" and "sent similar photos of a friend's prepubescent child." Jackson said that "both children were clothed" in the photographs and that the government did not bring charges relating to these acts. "But as the Court previously explained, it is clear that these two young girls were victims insofar as Sears was an adult in their lives who intentionally sexualized them by recording them without their knowledge and sharing their images with predators," Jackson wrote.

In his news release, Hawley said: "Forget the maximum guideline, Judge Jackson went below the maximum, the minimum, and below what the government requested in every single case for which we can find records, except two. In those two the law required her to impose the sentence the government recommended."

We realize Twitter does not always allow for nuance, but Hawley is still leaving out significant context in his thread. He uses snippets of quotes, pretends a bipartisan recommendation is Jackson's alone and then ignores a variety of factors - such as probation recommendations and out-of-date guidelines - that might result in lower sentences. In his zeal, he also ignores a long debate within the legal community about whether the current guidelines are appropriate.