In the face of Putin's aggression in Ukraine, JD Vance says 'America first' 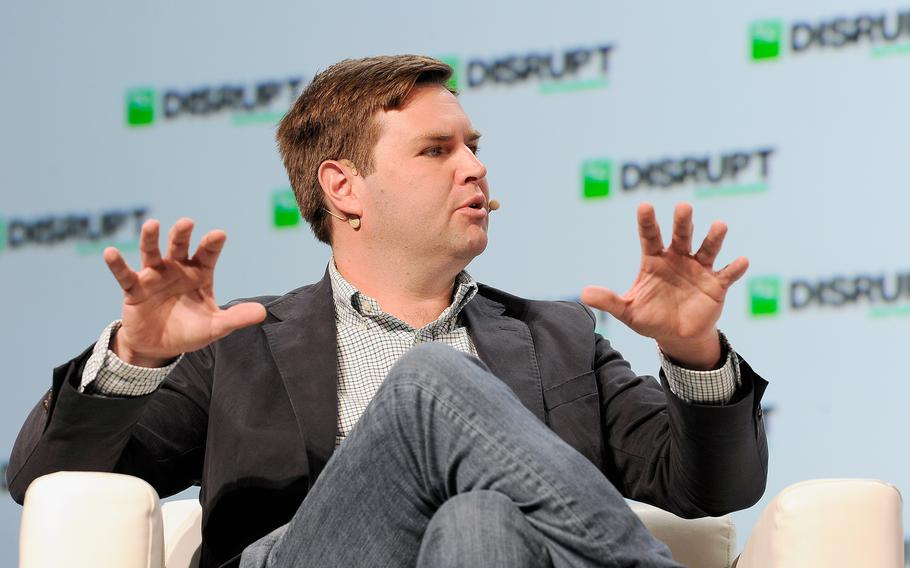 Venture capitalist J.D. Vance speaks during an event in San Francisco on Sept. 6, 2018. Vance, who is running for a U.S. Senate seat in Ohio, has said the U.S. should focus on the influx of deadly fentanyl across the U.S. border from Mexico before obsessing over a border “6,000 miles away,” referring to the war raging in Ukraine. (Steve Jennings/Getty Images for TechCrunch/TNS)

(Tribune News Service) — Republican Senate candidate JD Vance sought to deepen his populist appeal in Ohio by striking an "America First" tone and trivializing Russia's threats to Ukraine. But that stance risks hurting his odds in a state with a large Ukrainian-American population.

Before the invasion, Vance said that he doesn't really care what happens to Ukraine and the U.S. needs to pay more attention to its Mexican border. After Russian President Vladimir Putin's assault on Ukraine, Vance called it a tragedy but expounded on and stood by his stance that helping Ukraine can't come before taking care of U.S. problems. But that's a potentially hazardous gambit in Ohio, home to as many as 80,000 Ukrainian-Americans, one of the largest voting blocs in the U.S.

"I 100 percent can see Ukrainians and Ukrainian-Americans holding that against him," said Peter Krafcik, former president of the Parma Republican Club, which sits in the Cleveland suburb that is home to more Ukrainian Americans per capita than any city in the U.S.

A venture capitalist known for writing "Hillbilly Elegy" and backed by billionaire Peter Thiel, Vance has struggled to emerge from a crowded field of Republican contenders to replace retiring GOP Senator Rob Portman. Polls in the state show him running third. Several of the candidates are vying for former President Donald Trump's support, but none went as far as Vance in prioritizing U.S. domestic interests over the crisis in Ukraine.

Vance's position is part of a wider schism playing out in the GOP as Russia's invasion of Ukraine laid bare tensions between Trump's populist wing of the party and its traditional hawkish faction. Polls show the majority of Americans favoring support for Ukraine and disdain for Putin.

Vance said that the U.S. should focus on the influx of deadly fentanyl across the U.S. border from Mexico before obsessing over a border "6,000 miles away." He's also criticized the $13.6 billion in aid approved for Ukraine, saying an equal amount should go toward securing the southern U.S. border, even if it costs him votes.

"I can't think of one Ukrainian-American Republican voter who would vote for him," Andy Futey, who worked in Republican Ohio Governor George Voinovich's administration and is president of the Ukrainian Congress Committee of America, said.

That's a dilemma for Vance. Ohio has the U.S.'s eighth-largest population with Ukrainian ancestry at 42,111, though Ukrainian groups in the state put the number closer to 80,000.

Vance is appealing to Republicans concerned about issues like inflation and the southern border. A Fox News poll conducted between March 2 and March 6 showed that 56% of Ohio GOP primary voters characterized economic issues as extremely important, followed by 49% who named immigration and border security. That poll showed Vance in third place.

"You can't be led by politics," Vance said in an interview after a March 10 town hall near Cleveland. "People recognize that we can be compassionate as individuals, but we still have to put our national interests first as policy makers."

Vance has become known for contentious comments. Attack ads against him use past sound bites of him criticizing Trump, saying he's a "Never Trump guy" who "never liked" the former president, before he says he changed his opinion of Trump.

In response to reports last October that actor Alec Baldwin discharged a prop firearm on a film set that killed a cinematographer and wounded the director, Vance tweeted at Twitter co-founder Jack Dorsey to "let Trump back on. We need Alec Baldwin tweets."

Thiel didn't respond to messages left for comment. All of Vance's leading rivals in the GOP Senate race criticized his stance on Ukraine.

Before the invasion, Trump called Putin's pretext to invade "smart" and "savvy" and also invoked the southern U.S. border. He's since called the invasion "an atrocity" and said he sympathizes with the Ukrainian people, but he's also continued to complain about "the invasion into our country."

Walter Dolbin, 83, of the Cleveland suburb Brooklyn, was born in Ukraine but emigrated to the U.S. with his family in 1956. A Republican, he's undecided in the primary, but calls Vance's position "ignorant."

"If America doesn't back you, I don't think there's any freedom in the world," Dolbin said while waiting for a haircut at Zingale's Barber & Styling Salon in Parma's Ukrainian village.

Portman is co-chairman of the Senate Ukrainian Caucus and a leading proponent of giving Ukraine more military assistance and toughening sanctions on Russia.

Bob Heinly, 67, a retired cardiac diagnostic technician and Republican from the Cleveland suburb of North Royalton, said it "breaks my heart" to watch the suffering in Ukraine. He asked Vance during the March 10 town hall what more America can do to help, and he wasn't satisfied by Vance's answer that economic sanctions and charity are fine in the short term but that the solution is a stronger U.S. at home.

"We're Americans here. We don't sit by and watch the rape of the Ukraine go by and just say, 'Oh, well I'm not Ukrainian,"' Heinly said in an interview after the event. "I mean, we see this and we're like, 'I have to do something about it."'