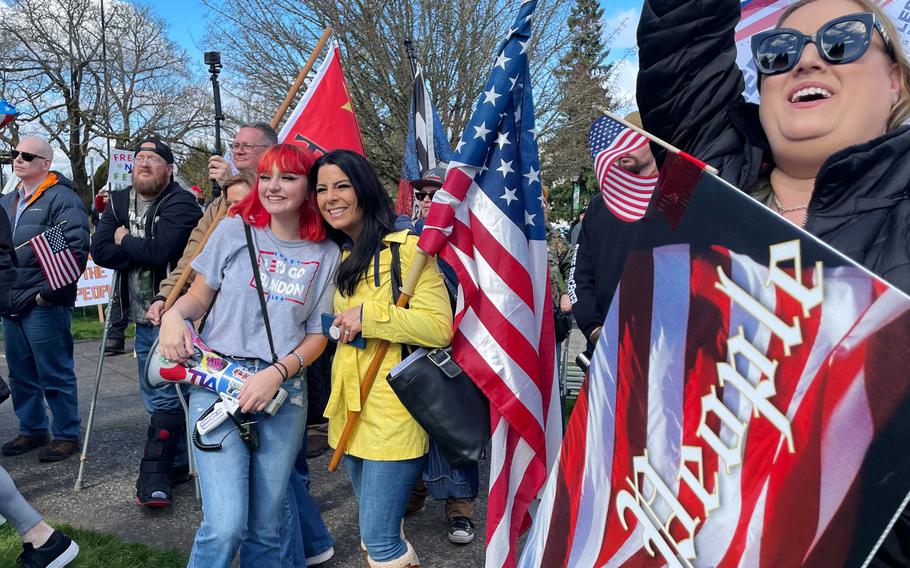 Melanie Gabriel, left, pictured with her bullhorn, is a 14-year-old anti-mandate activist from Washington state. She poses for photos with supporters after a speech at the state Capitol in Olympia on March 5, 2022. (Hannah Allam/Washington Post)

OLYMPIA, Wash. - Melanie Gabriel became the teen idol of Washington state's anti-masking movement last fall when she showed up to school and, claiming a medical exemption, marched barefaced to class.

As Gabriel's protest continued and she was barred from campus, she drew support from self-styled militia groups and other far-right extremists who saw the anti-mandate movement as a chance to rally conservatives toward more-militant stances. Members of the Proud Boys offered to escort Gabriel to class, prompting a security lockdown of three schools.

Now, with the lifting of most mask and vaccine requirements, Gabriel and her far-right backers are mobilizing the networks they've built over the past two years toward a new goal: November's midterm elections.

Gabriel spoke this month at a gathering that was emblematic of the increasingly blurry lines on the right - it was organized by the far-right Washington Three Percent and sponsored by a conservative student group, Turning Point USA. With the state Capitol dome in the background, speaker after speaker told supporters not to get complacent with mandates gone.

"Just because they're lifted doesn't mean they're going to stay that way, and that's why we're all here," said Gabriel, a striking figure in a bright crimson bob, cat-eye makeup, and a T-shirt with the anti-Biden slogan, "Let's Go Brandon." Her bullhorn was decorated with stickers that read, "Say No To Critical Hate Theory" and "Allergic to socialism."

A man in the audience yelled that Gabriel should run for governor.

That's the kind of youthful energy far-right movements are working to harness across the country as they teach the pandemic's newly minted activists how to get out the vote.

Extremism trackers say the past two years of fighting pandemic restrictions have given far-right groups a new generation of recruits and a blueprint for taking the lead in conservative organizing. The midterm season, they warn, brings a heightened risk of political violence, as armed groups build on those gains to push deeper into the mainstream.

"In Olympia today, we saw paramilitary groups and a range of other anti-democracy activists aggressively working to recruit young people and making pledges of unity against what they see as their common enemies," Eric K. Ward, executive director of Western States Center, a regional extremism watchdog, said in a statement after the event where Gabriel spoke.

Anti-mandate activists galvanized a broad cross section of political conservatives by melding disparate agendas into one fuzzy call to "fight tyranny." By now, most of their big demonstrations look like a right-wing soup, featuring Trump and MAGA logos, self-styled militia insignia, Confederate flags, references to the debunked QAnon movement, and Christian nationalist prayers.

Researchers say connections forged early in the pandemic allowed once-fringe groups to take on more visible roles in other kinds of organizing, such as the "Stop the Steal" effort to overturn the 2020 election results, or the campaign to whitewash U.S. history by attacking the teaching of racism and its impact.

The nonstop focus on grievances, researchers say, has created a tinderbox of disenchanted Americans who view themselves as foot soldiers in a struggle against mandates and other perceived attacks on personal liberties. Many right-wing politicians and media personalities are stoking the outrage in pursuit of a "red wave" in November.

"The grievances are there as a reservoir for mobilization, but they still have to be triggered. They have to be activated towards specific action," said Robert Pape, a University of Chicago professor leading an in-depth study of the rioters who violently breached the U.S. Capitol on Jan. 6, 2021. "And it rarely happens spontaneously."

The event where Gabriel spoke was called GRIT, for Government Resistance Impedes Tyranny. Several hundred people participated, along with a convoy of big rigs, part of the U.S. version of the Canadian trucker demonstrations that united a variety of conspiracy-minded protesters. Unlike at previous far-right gatherings in Olympia, no leftist counter protesters showed up, and the event was peaceful. Journalists were encouraged to refer to it as a "freedom festival," not a rally. On the damp statehouse grounds, leather-clad bikers chatted about gas prices with khakis-wearing politicians. Gun rights activists told college students that Russia's invasion of Ukraine is an example of why they consider the Second Amendment untouchable. A voter registration table sat next to a self-styled militia's information booth, a reminder that, in this milieu, there are two paths to making change.

Organizer Matt Marshall, founder of the Washington Three Percent and a member of his local school board, called the rally "a networking event" to connect pandemic-era upstarts with more established groups and reliable donors. A dozen or so Republican candidates for congressional and local races worked the crowd, urging constituents to serve on precinct committees as a first step into politics.

Some had clear-cut ties to extremism, with documented support for and interactions with parts of the anti-government movement. Take, for example, a former police chief named Loren Culp, a failed gubernatorial candidate now running to unseat U.S. Rep. Dan Newhouse, one of 10 members of the House GOP who voted to impeach President Donald Trump after the Capitol riot. Culp has close ties to a far-right sheriff's organization that believes local authorities have the power to decide whether state and federal laws are constitutional; in 2018, he pledged he wouldn't enforce a statewide gun-control law.

Many other candidates, however, fall into a gray area. They espouse views or cultivate relationships that only a few years ago would have put them on the far-right fringe, but which are now broadly shared, or at least tolerated, by Republican leaders. Extremism researchers say it's startling how quickly it became socially acceptable for relatively mainstream groups like Turning Point USA to provide funding and speakers to an event led by the anti-government Washington Three Percent.

"This kind of meshing of people is typical of the landscape we're seeing right now - the blurring of the line with an extremist host and mainstream sponsor," said Carla Hill, associate director of the Anti-Defamation League Center on Extremism, which is tracking more than 100 political candidates who have documented ties to extremist groups or conspiratorial movements.

Rachel Anderson, 29, head of Lewis County Young Republicans in the western part of the state, told the crowd how in the space of a year she went from being politically unaware to joining other nascent activists in "taking over" the county party. She said she has helped four Young Republicans get elected and contributed to a threefold increase in local GOP fundraising - work she calls vital to electoral success next fall.

"We can't be complacent anymore," Anderson told the crowd, to cheers. "We have to go out there. We have to canvass our voting rolls, make sure that every single vote counts and we elect proper, conservative patriots into office."

As they stump for votes, some Republican hopefuls are encountering a problem of their party's own making. After two solid years of being fed lies about a stolen election, a bloc of Republicans no longer see the point in voting and refuse to participate in what they regard as a corrupt system.

"We still get a lot of people who say, 'Nah, I just don't believe it matters,'" said Joe Kent, a former Green Beret trying to oust Republican Rep. Jamie Herrera Beutler, whose vote to impeach President Donald Trump after the Jan. 6 Capitol riot made her a pariah within much of the GOP. "And there's where we've got to come back, to tell people we're taking real stands."

When asked whether he had qualms about appearing at an event alongside groups like the Washington Three Percent, Kent looked puzzled and said he didn't know the organizers.

"All I know is that there's a bunch of people with flags," he said.

Within days of the event, Kent was under scrutiny again for another far-right link: a phone call with white nationalist Nick Fuentes in which the two discussed working together on social media strategy for Kent's campaign. In an interview, Kent told Oregon Public Broadcasting that he had no association with Fuentes beyond the conversation last spring.

Federal authorities are careful to say they don't police protected views, including the racist or anti-government stances often articulated at anti-mandate events, and don't want to overhype a fringe threat. The problem is, violent messaging is now laced throughout the planning for big gatherings, making it difficult to separate "keyboard warriors" from real-life provocateurs.

John Cohen, the top Homeland Security counterterrorism official, said in public remarks last month that the current threat environment is "more volatile and even more dynamic than it was even back in December." A recent report from the global nonprofit conflict-monitoring group known as ACLED said current trends in guns and violence at U.S. protests "raises the specter of further escalation in armed demonstration activity going into the upcoming midterm elections."

At the Olympia gathering, guns were concealed, in accordance with a recently changed law that bans open-carry near protests and the state Capitol grounds. The event was legally permitted, and organizers had asked participants not to display hateful imagery. Three Percenter logos, a few Confederate flags and a Proud Boys shirt were visible, but most of the participants wore generic MAGA, anti-Biden, or red, white and blue attire. Families brought their dogs. Children blew soap bubbles on the lawn.

"It's about trying to give themselves some historical cache, and it's remarkable how they do this," said terrorism analyst Juliette Kayyem, a former Homeland Security official now at Harvard's Kennedy School. "It's not like, 'We're just upset about vaccines.' It's 'This is the arc of history, and we're on it with all of these other quote-unquote freedom fighters.'"

The idea of historical significance resonated with Don and Carol Moody, a married couple in their 60s who were eating smoked-pork sandwiches in side-by-side lawn chairs at the Olympia event. Speaking over loud honking as another trucker convoy arrived, Don said that this was a moment, "to make a stand with what you believe in your heart."

The couple said they're confused and frightened by the bloodshed in Ukraine; the right-wing news outlets they watch tell them it's a precursor to World War III. They worry about whether their unvaccinated grandkids will be cleared to play sports. They said they've heard that the government might introduce a "vaccine passport."

They still plan to vote in the midterms - it's worth a try, they said - but they firmly believe lies about the "stolen" 2020 election and suspect the Biden administration is already cooking up new ways to disenfranchise the right.

"Everything they do seems to be poking us to be more angry," Don said.

Carol said that's why she's suspicious of the lifting of mandates. In her conspiratorial world, it's not the time to celebrate.

"They're thinking up something next," Carol said. "And that's what scares me."