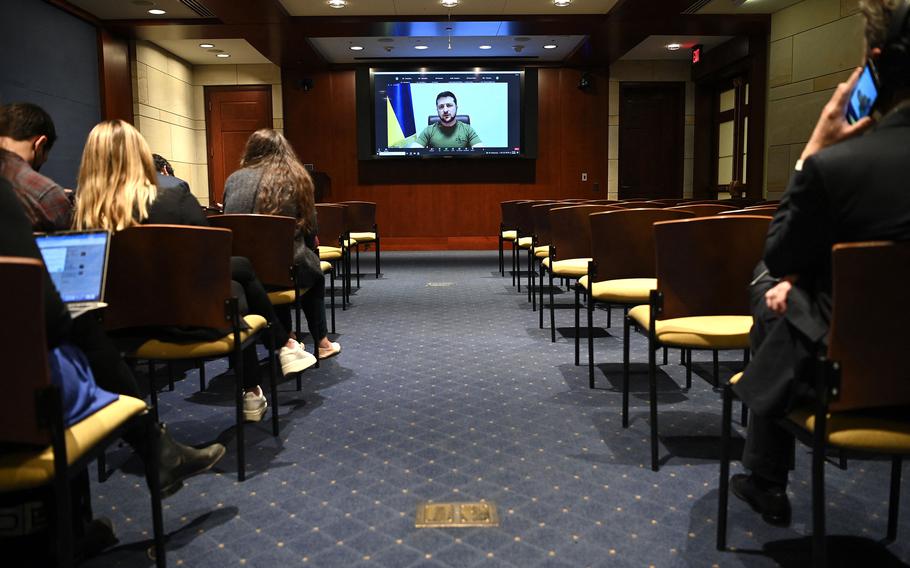 Reporters watch as Ukraine President Volodymyr Zelenskyy delivers a video address to the U.S. Congress in the Congressional Auditorium at the U.S. Capitol in Washington, D.C., on March 16, 2022. (Mandel Ngan, AFP, Getty Images/TNS)

WASHINGTON (Tribune News Service) — Americans are in no mood for a direct military conflict with Russia, but the same pressures that created the country’s tribal politics could threaten its anti-war mood.

Multiple polls show a majority of Americans support what President Joe Biden and NATO have done so far to help Ukraine in its scrappy effort to slow Russia’s military operation there.

Perhaps the most striking number in a Quinnipiac University poll released Wednesday was 54. That’s the percentage of those surveyed who approve of the decision by President Joe Biden and other NATO leaders against establishing a no-fly zone over Ukraine. (Thirty-two percent disapprove of that decision.)

Most Democrats (58%) and independents (57%) oppose using American and NATO fighter jets to police Ukrainian airspace, according to the Quinnipiac survey. Republican voters, like the representatives they send to Washington, are typically more hawkish — but more GOP respondents (47%) approve of the West’s decision against a no-fly zone than disapprove (38%).

There is a clear reluctance among American voters to do more than send Ukrainians more sophisticated anti-tank batteries, anti-missile systems, “kamikaze drones,” machine guns, ammunition and other weapons to continue their spirited effort to drive off their Russian invaders. But that does not mean voters see no role for U.S. military troops.

But only 41% support putting those American military boots on Ukrainian soil, according to that poll. Voters are much more in the mood for Baltic deployments like Biden already has ordered, putting more American troopers in places such as Estonia, Latvia and Lithuania to shore up NATO’s eastern flank.

One curious takeaway of these, and other, recent polls are majorities of Americans overall — and more Republicans than those who disapprove — support the kinds of moves Biden has made.

Yet, here is how Quinnipiac researchers summed up their polling on how Americans think the president is doing managing the Russia-Ukraine war: “Americans give President Joe Biden a negative 42-49% approval rating on his handling of the response to Russia’s invasion of Ukraine.” In the Monmouth survey, Biden also is underwater, with 48% saying he is doing a poor job and 46% in approval.

That suggests voters’ views of Biden overall and the domestic policies he has pushed since taking office are blurring their responses on his war performance. Those results also could be linked to his focus — prior to his announcement of the $800 million weapons package — on economic sanctions.

In the Monmouth survey, 81% of Americans said they support sanctions that have been imposed on Moscow. But Americans have a pessimistic assessment of their punch. Only 25% of voters said the economic penalties are having a “major impact” on Putin’s conduct of the war.

Still, beneath the surface of America’s anti-war mood are partisan pressures that could change the dovish sentiment. From the halls of Congress to the White House briefing room to conservative media outlets, there are familiar — and curious — pressures at work.

Rhetorical differences are striking among Republicans and Democrats on Capitol Hill, even as some members of Biden’s party are calling on him to send more combat hardware to Ukraine.

“This administration has been far too slow, not only in their implementation of sanctions, but the lack of completeness of sanctions,” the New York lawmaker told reporters, before calling on the U.S. commander in chief to find a way to grant Zelenskyy’s desire for Polish-owned MiG fighter jets. “The Ukrainian people need those MiGs, they need them now, they need them yesterday.”

Senate Minority Leader Mitch McConnell did say of Biden, “I appreciate the president’s efforts.” However, he then added: “But he needs to step up his game. There’s a lot more we need to do, and we need to do it quickly.”

Even in the White House briefing room, there is a push each day for “more,” as press secretary Jen Psaki and other administration officials caution too much “more” could drag the United States directly into the war.

“These are additional actions we have, additional options we have. And we can take them. And that is a decision that we would make through a discussion internally,” Psaki said Wednesday. A reporter shot back: “But what are you waiting for?”

Another reporter, without acknowledging the tactical risks, the same day asked Psaki this: “President Zelenskyy, in his remarks to Congress today, again made his request for a no-fly zone. He no doubt is aware of President Biden’s position on that. Is there any scenario in which President Biden would change his mind?”

Such sentiments from Republicans and the press corps offer a jarring juxtaposition against mellower assessments of the crisis by many Democrats.

“I think every one of us are deeply concerned about this spiraling into all-out war,” Rep. Earl Blumenauer, D-Ore., told reporters Wednesday. “And this man Putin is evil, and I don’t think any of us feel that it is beyond his capacity to use tactical nuclear weapons. I mean, he’s completely unhinged, untethered to reality, and we’re all playing with fire here.”

Overall, Americans want to avoid a direct shooting war with Russia, which possesses more nuclear arms than any other country.

“Watching with horror from afar, Americans are resolute in staying a course that will prevent a widening of the war,” Quinnipiac University Polling Analyst Tim Malloy said.

But in a country where just about every other issue in politics, culture and sports has become red versus blue, how long before doing “more” erodes the anti-war mood?

After all, just 18% of Republicans surveyed by Monmouth approve of Biden’s handling of the Ukraine crisis — compared to 77% of Democrats.

“There was a time when an international crisis would unite the country behind both the federal government’s response as well as its leaders,” said Patrick Murray, director of the Monmouth University Polling Institute. “That time is gone.”