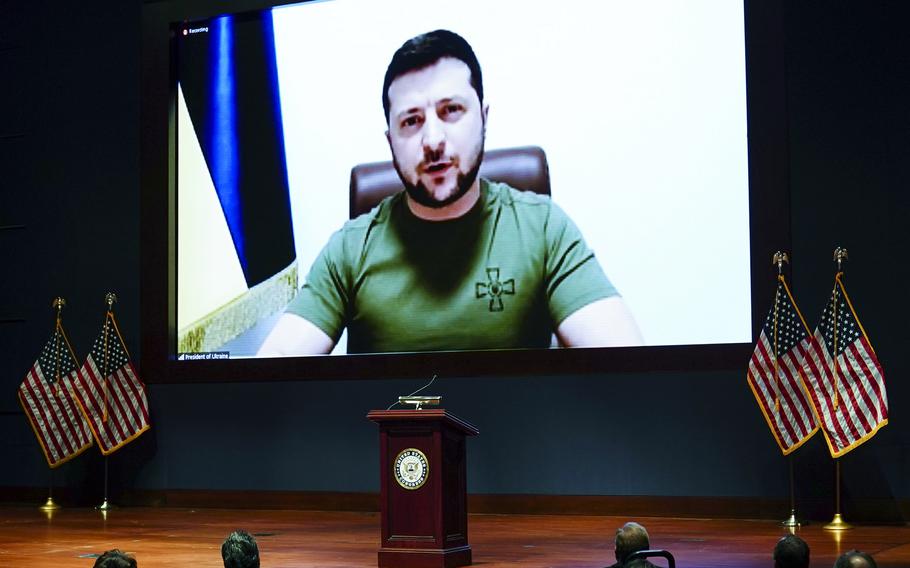 There has never been a speech to Congress by a foreign leader quite like the one Ukrainian President Volodymyr Zelenskyy delivered on Wednesday. Short in length, powerful in words, graphic in imagery, the address was a pointed challenge to President Joe Biden to do more to help Zelenskyy’s beleaguered country.

What Zelenskyy asked for was not new - the establishment of a no-fly zone over his country to stop Russian attacks from the skies. But if the appeal was not new or unexpected, the forcefulness by which he made it, and the way he singled out the president, was a step beyond where he had been before.

The young leader’s appearance highlighted the degree to which he and Biden are now inextricably entwined at a moment of great peril, not just to Ukraine but also potentially to the wider world as a result of Russia’s launching the biggest land war in Europe since World War II. Each leader has responsibilities and roles to play. At times, those roles intersect. At other times, they conflict.

Zelenskyy’s speech underscored his role as the leader of a nation facing unprovoked attack, a nation that has drawn support and sympathy from the rest of the world, but one that is not a member of the NATO alliance that has helped keep the peace in Europe since the end of World War II.

He and his people may appreciate the support they have gotten, but they still feel alone in the battle. His need is that of any leader in his situation, to plead and cajole and demand more aid as he watches his country being destroyed and thousands of civilians killed.

Biden’s role is obviously different. Through months of diplomacy, Biden and his advisers built support among allies for policies that in response to the invasion imposed punishing sanctions on Russia, signaling to Russian President Vladimir Putin the determination to isolate his country and inflict economic pain. The NATO-member nations also have sent, and continue to send, billions of dollars in weaponry to the Ukrainian military.

But as the leader of this alliance, Biden has been forced to balance the needs of Ukraine with the necessity of keeping the allies unified. More important, his goal is to support Ukraine militarily as much as possible without triggering another world war, one that could include the use of nuclear weapons, something the president has said explicitly, as he has ruled out any direct involvement by U.S. forces.

For that reason, Biden has consistently resisted approving a no-fly zone and so far the transfer of military aircraft from the West to Ukraine, even as he commits more money for various sophisticated weaponry. But Zelenskyy’s appearance before Congress, a body that includes many who agree with what he is asking, will only add to that pressure on Biden to find ways to do even more. It also could sharpen the agenda for the NATO meeting that Biden will attend next week in Europe.

Former defense secretary Leon Panetta described Zelenskyy this week as “probably the most powerful lobbyist in the world right now.” The evidence of that came a few hours after he spoke to Congress, when Biden announced an additional $800 million in aid to Ukraine. It was not all that Zelenskyy wants, but it was recognition of how much he has touched the world with his courage and leadership, and that there is no room for indifference on the part of those who say they support him.

In many ways, Zelenskyy’s address by video link was like others he has delivered to other capitals since the invasion began. He was dressed in an olive-green military-style T-shirt, his beard slightly trimmed. He sat at a desk and looked directly into the camera. And as in other speeches, he tailored his words to the country and audience.

On Wednesday, he mentioned the Pearl Harbor attack that brought the United States into World War II and the terrorist attacks of Sept. 11, 2001. Ukraine is feeling the same “every night,” he said, the same kinds of attacks targeting innocent people. “Russia has turned the Ukrainian sky into a source of death for thousands of people,” he said.

When he spoke to the British Parliament last week, he invoked the words of Winston Churchill and William Shakespeare. To his American audience, he echoed Martin Luther King. Jr.’s “I have a dream” speech to highlight his hope for relief from those attacks, with greater support from the United States.

There were other differences between past appearances and Wednesday’s address. The most striking was the sharing of a video that offered graphic evidence of the destruction that has rained down on his country and his people. The visual images contrasted what had been a beautiful and largely peaceful country with the reality of what it is becoming today.

The video included images of children suffering and in tears, of families separated, of dead bodies on the street, of burials in mass graves, of buildings destroyed by Russian missiles, of explosions in the night sky. The video closed with five words on a black background: “Close the sky over Ukraine.”

His overall message was simple and clear. “I call on you to do more,” he said. He asked not just for the no-fly zone or more military assistance but also said that “if this is too much,” the alternative is “other systems” that could accomplish the same. He also called on the West to implement more sanctions on Russia “every week until the Russian military machine stops.”

He said the international entities created after the last world war - presumably like NATO, though he did not say explicitly - have proved to be inadequate to protect a country like his in this day and age, and he suggested “new institutions, new alliances . . . a union of responsible countries that have the strength . . . to stop conflict immediately.”

Zelensky’s words and the video he shared carried an emotional impact that turned this appearance from the ordinary to the extraordinary. What it will lead to is the obvious question.

In 2014, another Ukrainian president spoke to a joint session of Congress: Then-President Petro Poroshenko asked the United States for military aid to fight back against Russian aggression. After a meeting with then-President Barack Obama, he was asked whether he had gotten what he wanted. “I got everything possible,” he said.

There is a difference between everything possible and everything one wants, and that is the tension between Zelensky and Biden today. The Ukrainian leader has the support of the United States and other allies. With his appearance Wednesday before Congress, Zelensky did all he could to make the case for why his country deserves even more.