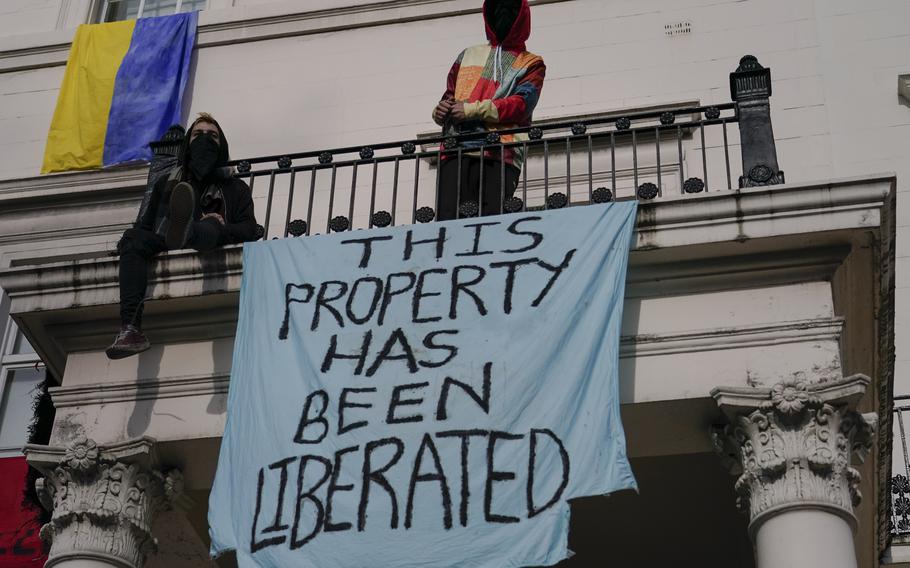 Squatters display banners and a Ukrainian flag as they occupy a building which is believed to be owned by a Russian oligarch, in London, Monday, March 14, 2022. (Alberto Pezzali/AP)

The Department of Treasury on Wednesday gave a new international body a list of 50 Russian elites that the United States views as its top priorities for enacting new sanctions, as global law enforcement steps up its hunt for the assets of oligarchs tied to the Kremlin.

Treasury officials provided the list to the Russian Elites, Proxies, and Oligarchs (REPO) task force, a new multinational body involving the United States and more than a half-dozen allied nations, for the group’s first meeting. The task force will pool the resources of the countries’ law enforcement divisions to track down the assets of Russian oligarchs stashed overseas, a difficult task complicated by the opaque or complicated financial instruments frequently used by Russian financial elites to hide their holdings from public view.

Treasury publicly released 28 of the 50 names on the list, including Russian President Vladimir Putin, Russian Foreign Minister Sergei Lavrov and Russian mega-billionaire Alisher Usmanov, among other top government officials. Treasury officials declined to share the other 22 names. One person familiar with the matter, speaking on the condition of anonymity to frankly describe the sanctions, said administration officials typically do not want the names of sanctioned oligarchs to be known ahead of time, because that could help them evade the penalties.

Treasury’s list reflects how the Western allies are ramping up their attempts to ensure that their sanctions measures - which typically block the sanctioned individuals from accessing their assets - are effectively implemented. The United States has sanctioned more than 200 Russian oligarchs and entities since the invasion of Ukraine, according to an estimate by the Brookings Institution, a Washington-based think tank. The European Union has sanctioned more than twice that number.

“What Treasury’s priority is right now is expanding the global reach of the individuals who have already been sanctioned by U.S. review, and I think they’re giving countries the opportunity to say they’re joining an international effort,” said Daniel Glaser, who served in the Treasury Department’s Office of Terrorism and Financial Intelligence under the Obama administration and is now the global head of jurisdictional services at K2 Integrity, a risk compliance firm.

The Department of Justice has also announced a separate effort, called Task Force KleptoCapture, to coordinate numerous law enforcement agencies - including the Internal Revenue Service, Federal Bureau of Investigations and Southern District of New York - in the attempt to uncover where sanctioned Russians are keeping their assets.

The sanctions on Russian elite represent one part of the West’s broader effort to punish Russia financially for the invasion of Ukraine. Many of these measures - such as targeting the country’s central bank reserves - are likely to hurt the country as a whole, but the sanctions on oligarchs are designed to hit only a smaller circle of powerful individuals.

“Making people close to Putin pay a price is, to my view, ideal. ... They’ve certainly gone way further than they have in the past,” said Dean Baker, a liberal economist at the Center for Economic and Policy Research, a center-left think tank. “It’s not clear how many people can really influence Putin, but those are the people you most want to hit. I don’t see a downside.”

Russia responded to the west’s economic countermeasures on Tuesday by imposing sanctions on President Biden, White House spokeswoman Jen Psaki, and other administration officials. Those measures are viewed as ineffective, however, because few Americans have Russian bank accounts or any assets in that country.

Usmanov’s company Metalloinvest, a mining firm, said in a previous statement that it considers the sanctions against him to be “ungrounded and unfair.” Usmanov also released a statement accusing the E.U. of “false and defamatory allegations damaging my honour, dignity and business reputation.”