From beer to semiconductors, Russia’s war in Ukraine will hit US state economies 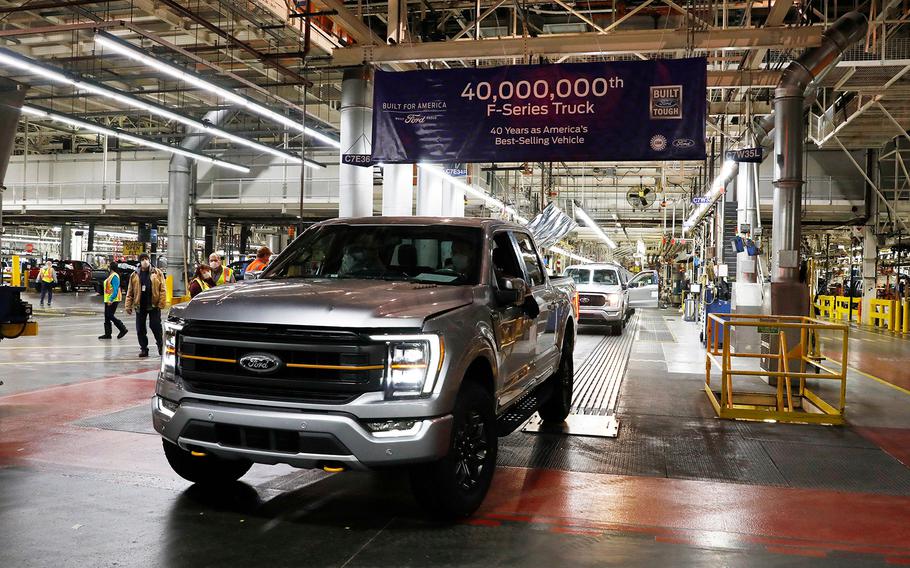 The 40 millionth Ford Motor Co. F-Series truck rolls off the assembly line at the Ford Dearborn Truck Plant on Jan. 26, 2022, in Dearborn, Mich. Michigan automakers would be hit by continued shortages of computer chips, as semiconductor plants deal with cutbacks in Ukrainian supplies of the neon they need for lasers. Higher prices for palladium, used in catalytic converters and a major Russian export, would also affect carmakers. (Jeff Kowalsky, AFP via Getty Images/TNS)

(Tribune News Service) — An extended conflict between Russia and Ukraine would hit the U.S. economy broadly, with all 50 states affected by the fallout, according to an analysis by Moody’s Analytics.

While the U.S. has limited trade ties with Russia and Ukraine, businesses from beer breweries in Missouri to semiconductor plants in California would see an impact, as prolonged combat and even harsher sanctions constrict supplies and drive up global prices for oil and other critical materials.

“The odds are much better than even that we actually do experience a recession in that scenario,” chief economist Mark Zandi said.

Some states would fare better than others, according to the analysis of effects of a military conflict that extends into next year.

Energy producers such as North Dakota and Alaska stand out in that regard, with a lengthy conflict boosting oil prices to $150 a barrel as Russia reduces energy supplies to Europe. On the flip side, Alabama and Mississippi — the two states most dependent on cars and driving — would suffer disproportionately from an energy shock.

The analysis, by Moody’s Analytics senior regional economist Adam Kamins, shows that an extended war would hurt U.S. states and localities in a variety of ways, some of them not immediately apparent.

— Michigan automakers would be hit by continued shortages of computer chips, as semiconductor plants deal with cutbacks in Ukrainian supplies of the neon they need for lasers. Higher prices for palladium, used in catalytic converters and a major Russian export, would also affect carmakers.

— High-end condominium prices in New York City and south Florida could fall as Russian oligarchs are frozen out of those markets.

— Farmers would see mixed effects. Some would benefit from higher prices for wheat and corn as supplies from Ukraine — the breadbasket of Europe — are constricted. They would, though, have to pay up for fertilizer, a key export from the region.

— Livestock producers would find themselves spending more on feed stock. Higher barley prices would affect beer makers in and around St. Louis.

— States with greater exposure to the financial markets, like New York and Connecticut, would be under pressure as extended hostilities after a Russian occupation of Ukraine heighten uncertainty and put a further big dent in stock prices.

A Moody’s Analytics computer model suggests that the U.S. as a whole would be able to avoid a recession, even if military hostilities are prolonged. But Zandi has his doubts.

“Models are very good in typical times,” he said. In highly stressed and very unusual environments, “the world goes what I would call non-linear and things go off the rails.”