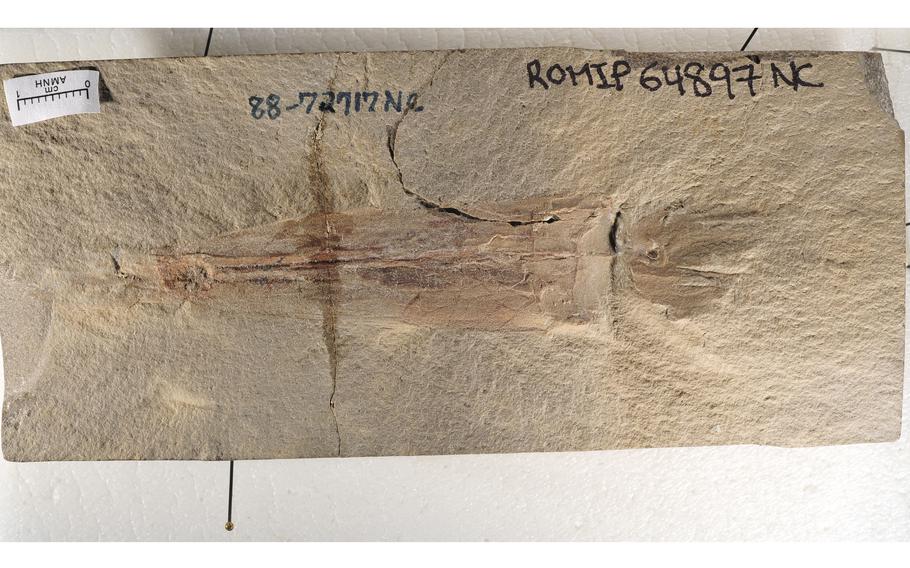 An exceptionally well-preserved vampyropod fossil from the collections of the Royal Ontario Museum. The fossil was originally discovered in what is now Montana and donated to the museum in 1988. (American Museum of Natural History)

Paleontologists have identified the earliest known ancestor of the octopus and vampire squid — and named the newly discovered species after President Joe Biden.

The more than 300-million-year-old fossilized Syllipsimopodi bideni, a vampyropod, was unearthed from the Bear Gulch Limestone in Montana and donated in 1988 to the Royal Ontario Museum in Canada. There, it sat relatively unstudied until paleontologists from the American Museum of Natural History slid it under a microscope.

They noticed that the fossil resembled an octopus and vampire squid, but with 10 arms instead of eight, two rows of tiny suckers and what appears to be an ink sac — the organ that produces the ink that octopuses and squid spray in self-defense when escaping from predators. The findings were published Tuesday in the journal Nature Communications.

“This is one of the reasons museum collections are important because when a new species, whether it’s living or extinct, is first discovered and collected, people don’t always recognize that it is a new species,” said Christopher Whalen, the lead author of the paper and a postdoctoral researcher with Yale University and the American Museum of Natural History in New York City.

Whalen said in an interview with The Washington Post that he and a colleague were studying the fossil around the time Biden was elected president, so they named it Syllipsimopodi bideni, after Biden, to commemorate the start of his presidency and raise awareness for his climate change policies.

The fossilized creature can be traced back 328 million years to a time when its home in present-day Montana would have been part of an ancient continent that was near the equator, Whalen said.

Whalen explained that its environment would have been similar to that of today’s Bay of Bengal, which lies east of India.

Whalen stumbled across the fossil several years ago searching at the Royal Ontario Museum for a different fossilized animal, he said. He said he didn’t find what he was looking for and, at the time, considered the trip a failure. But he did find an exceptionally well-preserved fossil that would turn out to be an ancient vampyropod — a group of organisms that includes octopuses, vampire squid and other relatives.

“It’s very rare to see that kind of detail in a fossil because, of course, this is entirely soft tissue structures,” he said.

The fossil, Whalen said, is important because it seems to validate a long-standing hypothesis that two filaments, or slender, threadlike structures, seen in vampire squid used to be arms. That would mean vampire squid and octopuses could have had 10 arms at one time and lost a couple as they evolved, he said.