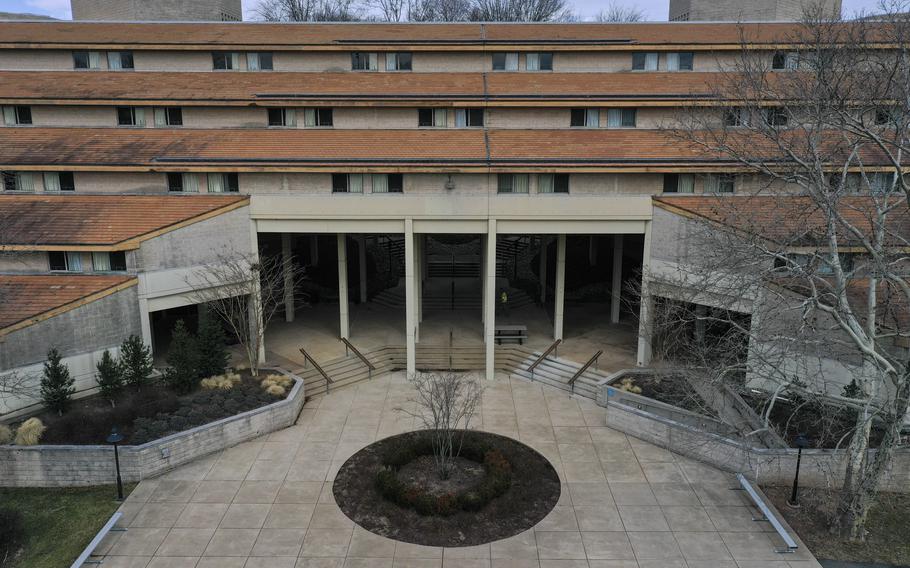 An aerial view of the National Conference Center in the Lansdowne area of Leesburg last month. Some in the Loudoun County community have opposed the use of the site for processing as many as 1,000 Afghan evacuees per month. (Ricky Carioti/The Washington Post)

About 300 Afghan evacuees arrived this week to a Department of Homeland Security processing center in Northern Virginia whose use has been opposed by nearby residents, local and federal officials said Thursday.

The National Conference Center, in the Lansdowne area of Loudoun County, is expected to host each month as many as 1,000 Afghans who were evacuated out of their native country as part of a massive airlift that started when the Taliban seized control of Kabul in August.

Most of the more than 76,000 Afghan evacuees who have been resettled across the United States so far were processed at military installations, which, in many cases, were not ideal for hosting so many families at a time, resulting in several families sharing tents, DHS officials said.

Because many of those individuals arrived without any documents, it often took several months to process them and pair them with resettlement agencies working to find them permanent homes in various U.S. communities, including in the Washington region.

The use of the National Conference Center is part of a more expedited phase of U.S. resettlement efforts. Now, those arriving from refugee sites in other parts of the world have already had most of their documents processed, resulting in a stay of between two and four weeks before they move on to permanent homes, DHS officials said.

The evacuees to be processed at the site either helped in the U.S. war effort in Afghanistan or are female leaders, human rights activists or journalists who were evacuated because of likely retribution from the Taliban, DHS officials said.

At the conference center, where families will get their own temporary homes, the evacuees will be able to apply for U.S. work authorization.

They will also receive services, such as health care and mental health counseling, and will participate in workshops on U.S. laws and civic education, DHS officials said.

“We will continue to work closely with state and local partners to ensure we can continue to resettle our Afghan allies as quickly, safely, and successfully as possible,” the DHS said in the statement.

Some residents in the resort-style Lansdowne community have not been comforted by such assurances.

During a town hall meeting last month, attended by about 200 mostly local residents, many expressed frustration over not being consulted before the owners of the conference center signed a contract with DHS to host the Afghan evacuees through September.

Some argued that the busloads of arriving evacuees from nearly Dulles Airport would clog traffic in the area. Others shared dark theories about the evacuees, arguing that some could be criminals or terrorists and that their presence at the conference center, a short walk from two schools, posed a risk to the community.

Now that the first group of evacuees has arrived at the site, Loudoun County officials planned to hold a virtual town hall meeting at 3 p.m. Thursday to address any additional concerns, county officials said.