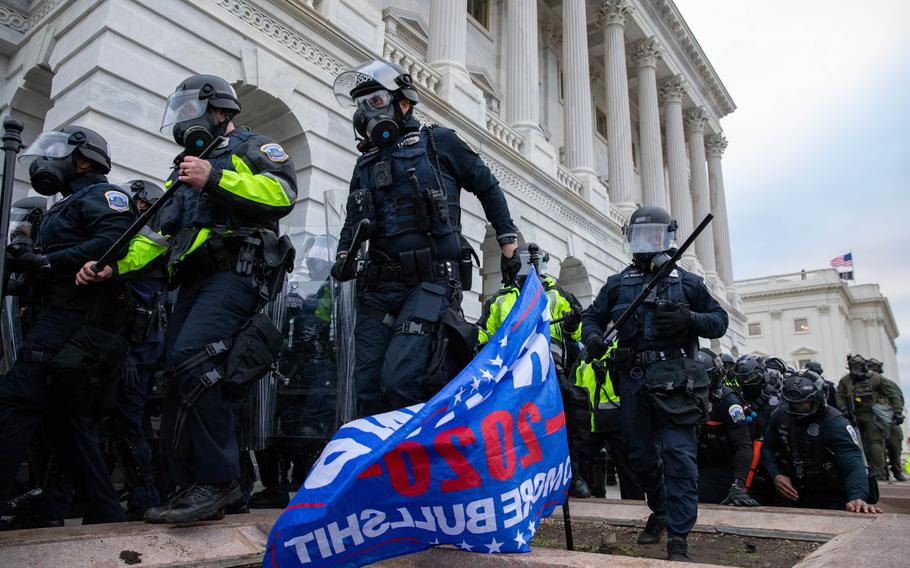 The U.S. Capitol Police should better train officers to deal with the kind of large violent crowds that attacked Congress on Jan. 6, when the agency’s response was hampered by poor information-sharing and officers’ hesitancy to use force, according to a new report.

The report by the Government Accountability Office, based on a survey of Capitol Police officers, recommends more crowd control training, noting that many officers said there was a hesitancy to use force or make arrests during the 2021 melee.

Most of the officers who answered the GAO’s questions reported that there should have been more guidance and intelligence shared with officers ahead of time, with more than 200 of the 315 officers surveyed saying police brass offered insufficient instructions before and during the attack.

More than half of the officers surveyed said intelligence, information and guidance had not been shared with them adequately or at all. One noted that if officers “had any information on the morning of the 6th aside from ‘Prepare for a long day’ they would have had a different mindset when the group approached.”

The violence at the Capitol occurred after a crowd of thousands of Trump supporters marched there to protest as lawmakers formally tallied the electoral vote count that sealed Joe Biden’s 2020 victory. Officials have said more than a thousand people in the crowd overpowered police officers and rushed into the building. Five people died during the attack or in the immediate aftermath, and more than 100 police officers were injured.

The GAO report noted that Capitol Police training for violent protests typically envisions a small handful of physically threatening individuals, not a mob. And the oversight agency found many officers expressed a reluctance to use force in confrontations, out of concern that senior managers in general are likely to punish officers who do so.

About 1 in 4 officers who responded to the survey “identified concerns related to use of force, including that they felt discouraged or hesitant to use force … and that leadership needed to clarify the appropriate use of force during situations like the January 6 attack,” the report said. Some officers expressed concerns that if they had used more force on Jan. 6, there would have been greater bloodshed.

The GAO findings largely dovetail with The Washington Post’s reporting about the intelligence and preparedness failures that preceded Jan. 6. The Post has found that the Capitol Police were hampered by poor communication and planning.

The Justice Department’s inspector general is conducting a separate investigation of how the FBI and other agencies at the department handled the preparation for Jan. 6 and the response.

The GAO, an investigative arm of Congress, concluded that the events of Jan. 6 “raised important questions about whether the Capitol Police is adequately prepared to respond effectively and efficiently in the current threat environment. The department has taken some positive first steps … but needs to better understand and address potential officer hesitancy to use force, concerns with the department, and morale.”

After the breach of the Capitol, senior police officials tried to clarify the agency’s use-of-force policies. But the GAO said officers reported that “misconceptions related to use of force have been persistent both before and after the attack.”

Nearly half of the officers surveyed said they felt slightly or not at all prepared to deal with the crowd that descended upon the Capitol that day, while a slightly smaller number said they felt well or somewhat prepared.

The GAO recommended that the Capitol Police provide more extensive crowd control training to more of its officers, not just those with specific crowd control assignments. That training also should be more realistic, the report said.

In response to the GAO report, Capitol Police Chief Thomas Manger said his department “agrees with the recommendations” and is “currently taking steps to develop action plans to implement” them.

Previous GAO reports have looked at other elements of the Capitol Police’s performance and found them wanting. A report released last month noted that the agency’s planning for Jan. 6 “did not reflect the potential for extreme violence aimed at the Capitol and did not include contingencies for support from other agencies.”

Despite information that “protesters could be armed and were planning to target Congress, the Capitol Police’s plans focused on a manageable, largely non-violent protest at the Capitol,” that report said.

The GAO also previously concluded that the Capitol Police’s process for analyzing and addressing security risks at the Capitol complex “is not comprehensive or documented.”