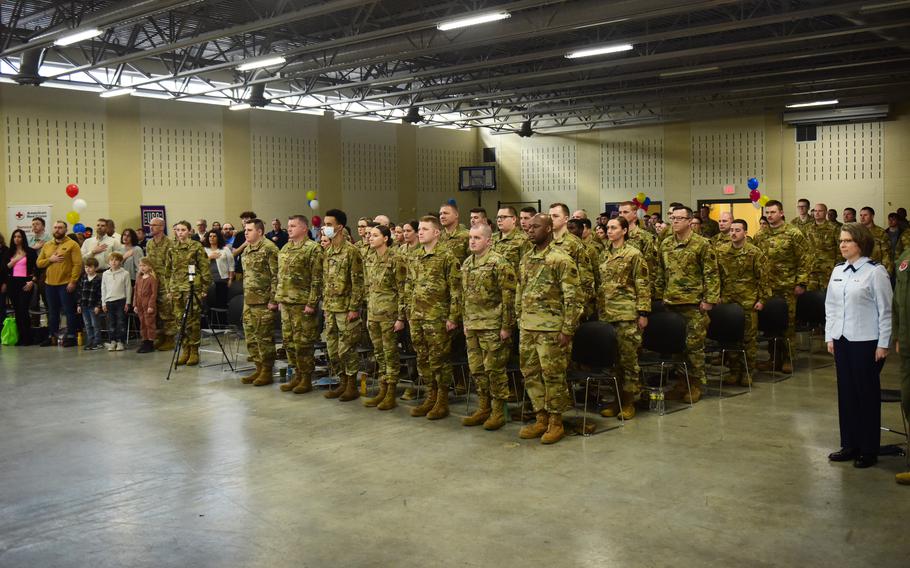 Airmen assigned to the Ohio Air National Guard’s 178th Wing stand at attention, along with family and friends, during a Call to Duty ceremony March 6, 2022 in Springfield, Ohio. The airmen are scheduled to deploy to support U.S. Central Command operations. (Colin Simpson/U.S. Air National Guard)

SPRINGFIELD, Ohio (Tribune News Service) — In a ceremony Sunday morning in Springfield, military leadership thanked the airmen and families of the Ohio Air National Guard’s 178th Wing, as they prepare to deploy overseas in support of Air Force Central Command.

Between April and July, 53 airmen from the 178th wing will be heading to the Middle East for a six-month long deployment, to provide “tactical command and control capabilities” in the region.

“The reason we’re here today is not just to acknowledge their deployment, but to acknowledge how difficult that is on the family,” said Maj. Gen. James Camp, Assistant Adjutant General for the Ohio Air National Guard. “It’s tough on the family when an airman goes overseas, not just because of the fear of the unknown, but also everyday life. So this is an opportunity to acknowledge that sacrifice in advance before they go, and give them the recognition that I think they deserve.”

The deploying airmen all have specific skillsets and will primarily serve in a supporting capacity, including personnel professionals, communications specialists, and engineers. Their duties will include everything from managing payroll to defending their respective bases if need be.

Master Sgt. Brock Cochran and his wife, Master Sgt. Amanda Cochran, both serve in the Ohio Air National Guard. Amanda will be deploying to the Middle East sometime this summer, while Brock stays to take care of their three children.

“It’s a little nerve-wracking, a little emotional. It’s my first time deploying, our first time being six months away from each other,” Amanda said.

The hardest part is being away for all three children’s birthdays, as well as holidays like Christmas and Thanksgiving.

“It’ll definitely be difficult,” Brock said. “We do have a good support system, and they understand what’s happening, but they do need their mom.”

Col. Dominic Fago, Commander of the 178th Wing, emphasized the importance of families.

“Every one of these members have a family that counts on them,” said Col. Fago. “The support of families is equally if not more vitally important to the success of our mission.

Camp, who has been deployed several times in the course of his career, advised airmen to trust their training.