Armed intruder at Joint Base Andrews is arrested 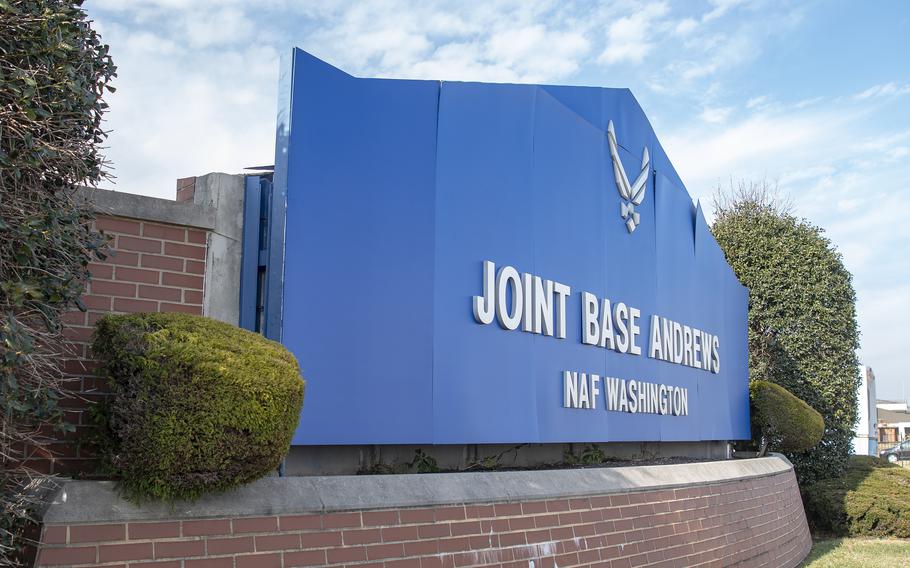 A Joint Base Andrews sign faces toward the Maryland base’s flight line on Dec. 10, 2021. (STARS AND STRIPES)

Two intruders, at least one of them armed, entered Joint Base Andrews on Sunday night, apparently after the return there of Vice President Kamala Harris, according to several accounts.

A spokeswoman for the base said one person had been taken into custody. Another person was still being sought at 10 p.m., she said. No shots were fired and there were no reports of injuries.

The intruders drove through a security checkpoint at the main gate about 9 p.m., and failed to heed guards' orders, base officials said late Sunday in a statement.

Barriers were deployed, according to the statement. The vehicle was stopped, but two people fled, the base said.

As of 11 p.m. Sunday, the whereabouts of the second intruder remained unknown, according to the statement, and the main gate to the base remained closed.

The incident appeared to be one of the most serious breaches of security in memory at Andrews, which is a few miles outside Washington, in the Suitland area of suburban Prince George's County, Md.

It was unclear late Sunday what motivated the incident, and why the intruders entered the base.

Harris and the Cabinet members had traveled to Selma to commemorate the anniversary of Bloody Sunday, in which police attacked peaceful protesters in 1965. They left Alabama on Air Force Two about 6:45 p.m. Sunday and landed in Maryland about 9 p.m.

A report of the "armed individual on base" was sent at 9:06 p.m. via NPR's Scott Detrow, who was traveling with the group. The president was not at Joint Base Andrews on Sunday because he traveled directly from Delaware to the White House via a helicopter.

Harris departed via Marine Two before the report was made public, according to reports from journalists traveling with Harris that were confirmed by the vice president's office.