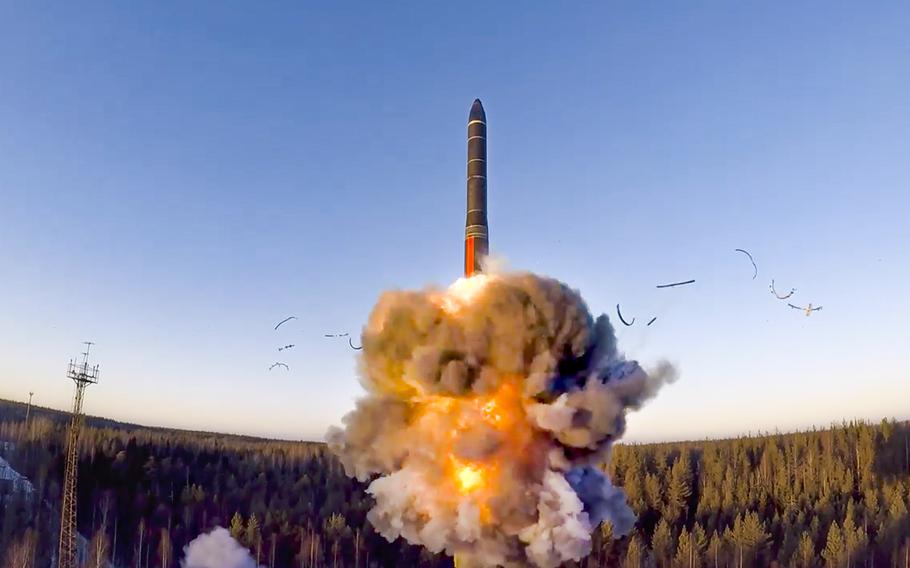 (Tribune News Service) - Growing up in Las Vegas in the 1980s, Glynn Walker always knew he could die in a nuclear attack.

The 43-year-old engineer remembers “duck and cover” drills in elementary school, where you dive under your desk in the event of an air raid, and basement fallout shelters in churches and gymnasiums with radiation-warning signs on their doors.

“We had the nuclear test sites, Nellis Air Force Base, the Hoover Dam,” he said, referring to Nevada landmarks that likely were in the crosshairs of Soviet military strategists. “We knew we’d be a target,” he said.

The prospect of nuclear war also permeated popular culture at the time, as it had done during the initial nuclear era of the 1940s, ‘50s and ‘60s. Movies like “War Games,” “Red Dawn” and “The Day After” played on TV. Pro-wrestling hero Hulk Hogan battled the villainous Russian Nikloai Volkoff right after Saturday morning cartoons. “99 Luftballoons,” a pop song about an accidentally triggered Armageddon, by the German New Wave band Nena, was a radio hit in the early 1980s.

“I can remember riding my bike through the desert as a kid and thinking one day this whole valley will be a radioactive hole,” Walker said. “I didn’t panic about it. It was just the way it was.”

As the years passed, Walker stopped worrying about nuclear bombs as other threats emerged: terrorism, the war in Iraq, climate change. But the old anxieties came flooding back last week as Russian President Vladimir Putin launched a massive military invasion of Ukraine, while warning potential foes who intervened of “consequences greater than any you have ever faced in history,” and putting his nuclear forces on high alert.

Walker doesn’t think nuclear war over Ukraine is likely. “My hope is there are some guardrails or he’s playing chicken,” he said of Russia’s pugilist-in-chief.

And yet, like other Americans, some for the first time in years, he’s found himself fantasizing about what would happen if a nuclear bomb went off near his home in the Atlanta suburbs, several miles from the nearest city.

“This time I’m thinking I won’t be eviscerated, instead I’ll be left to slowly die of radiation poisoning,” he said. That brings him no comfort.

Experts say that Putin has little to gain from starting a nuclear war, but his recent rhetoric has stirred up long-buried fears in generations of Americans who grew up believing nuclear annihilation was not just possible, but practically inevitable.

“All it took was one guy basically saying, ‘OK, I’m putting my guys on nuclear alert,’ and all of a sudden all the movies in our head are back,’” said David Greenwald, a psychologist and author of the 1987 book “No Reason to Talk About It: Families Confront the Nuclear Taboo.” Putin “brought this stuff out of the closet.”

Nuclear anxiety has been part of the American psyche since the United States dropped atomic bombs on the Japanese cities of Hiroshima and Nagasaki in August 1945. What before had seemed like science fiction suddenly became reality: Humanity was armed with the power to destroy civilization.

Children, struggling to process what most grown-ups could barely comprehend, let alone deal with psychologically, were especially impacted.

“There was a lot of research that showed the youth at that time experienced deep fear and anxiety that adults could no longer protect them from adult things,” said Spencer Weart, a science historian and author of “The Rise of Nuclear Fear.” “People who joined the counterculture in the ‘60s will tell you it was ‘duck and cover’ and hiding from ‘the bomb’ that convinced them we had to change the system.”

The fear came in waves, peaking in 1962 during the Cuban Missile Crisis and again in the early 1980s because both Soviet and U.S leadership seemed unpredictable, if not bent on confrontation. But even as global warming supplanted atomic Armageddon as the most likely destroyer of civilizations, the threat of nuclear war never went away entirely.

“It receded from the public imagination in part because there were other problems that came to the fore, but we still live in a world of nuclear weapons,” said Francesca Giovanni, executive director of the Project on Managing the Atom at Harvard. “It’s always been in the background.”

For many adults who’ve lived their entire lives in the shadow of “the Bomb,” the sense of deja vu is palpable.

As a child in New York City in the 1960s, Victor Narro remembers feeling comforted whenever he saw a sign indicating a fallout shelter — three yellow triangles in a black circle. “As a kid I held that image as a sacred image of safety,” he said. “That was the indoctrination.”

His family immigrated from Peru to New York City in the ‘60s, when he was 4 years old. When he started kindergarten the following year his teachers told him the city would likely be the first target in a nuclear war — that’s why his class had to do so many drills.

“They were always leading us to different parts of the playground,” he said. In college, Narro became a student activist and put a lot energy into trying to dismantle the arms race. But the work felt hopeless to him and he came to believe he would not make it out of the 1980s alive. He relied on his Catholic faith to help him cope. “I remember praying a lot,” he said.

The end of Ronald Reagan’s presidency brought Narro some relief, as did the dismantling of the Soviet Union in 1991.

“By the early 1990s, I started feeling like it was behind me,” he said. “I knew there would always be nuclear weapons, but the end of the Cold War felt like the end of the policy of destruction from both sides to maintain peace.”

This last week however, the old feelings of fear and hopelessness resurfaced.

When Putin started talking about nuclear weapons, Narro posted a fallout shelter sign to social media. “I was like, ‘Is anyone feeling this?’” he said. “I wanted to re-create that space of safety.”

For Kim Lachance Shadrow, 46, a freelance journalist in Long Beach, the week’s events brought back memories of a particularly frightening music video from the 1980s, Genesis’ “Land of Confusion.”

“I didn’t see any of the nuclear war movies, but I watched MTV like a maniac and recorded videos as if they would never be shown again,” she said.

Lachance Shadrow wasn’t a huge Genesis fan, but “Land of Confusion” was one of the videos she taped and watched over and over again. It stars a creepy Ronald Reagan puppet in the midst of a fever dream. In the final moments of the video, he reaches out from a brass bed to call a nurse to bring him a glass of water. Instead of pressing the red button marked “Nurse,” he pushes the one just above it marked “Nuke.” The video ends with a fiery mushroom cloud.

“We were painfully aware that could happen anytime, anywhere,” she said.

The video was released in 1986, the same year that Lachance Shadrow remembers visiting the Trump Hotel and Casino in Atlantic City, N.J., with her family. Her parents left her and her sister in the hotel room while they went downstairs to drink and gamble. It was April 26, the day the nuclear reactor at Chernobyl in Ukraine (then part of the Soviet Union) exploded, and Lachance Shadrow and her sister watched the news all day long.

“I was 11 and that was the period in my life when I started to question Catholicism and my Catholic school experience,” Lachance Shadrow said. “The Genesis video was a big video for me, and Chernobyl was life-changing.”

While pop culture has extracted some catharsis from our nuclear anxieties over the decades — Stanley Kubrick’s “Dr. Strangelove or: How I Learned to Stop Worrying and Love the Bomb” (1964) is a masterpiece of fission-reaction gallows humor — a handful of books have tried to warn about the possible fate of the earth if humankind isn’t careful.

The last chapter of planetary scientist Carl Sagan’s best-selling classic “Cosmos,” published in 1980, is a plea to the people of Earth to wake up to the danger of nuclear weapons.

“From an extraterrestrial perspective, our global civilization is clearly on the edge of failure in the most important task it faces,” he wrote. “To preserve the lives and wellbeing of the citizens of the planet.”

Over the next decade, he and his wife, “Cosmos” co-author Ann Druyan, led protests at nuclear test sites in Nevada, where they were arrested several times.

Over time, they felt they were successful in helping to bring public attention to the cause of de-escalation and disarmament. The number of nuclear warheads in the world had been reduced by 40,000 from the height of the Cold War to the end of the Obama administration.

“Someone was listening,” Druyan said in an interview this week from her home in Ithaca, N.Y.

In the 1990s, the couple turned their attention to climate change, which appeared to be moving faster than earlier models had predicted.

Druyan said she understood the shock that so many felt when Putin put the world back on nuclear notice.

“Here we are in a situation we have not been thinking about because we had other fish to fry,” she said. “When we look at the destruction of the entire Earth, we were thinking the feedback mechanism speeding up was the most urgent problem, and suddenly the subject has been changed.” ©2022 Los Angeles Times.