'A Brutus in Russia?' Graham says taking out Putin the way to stop Ukraine invasion 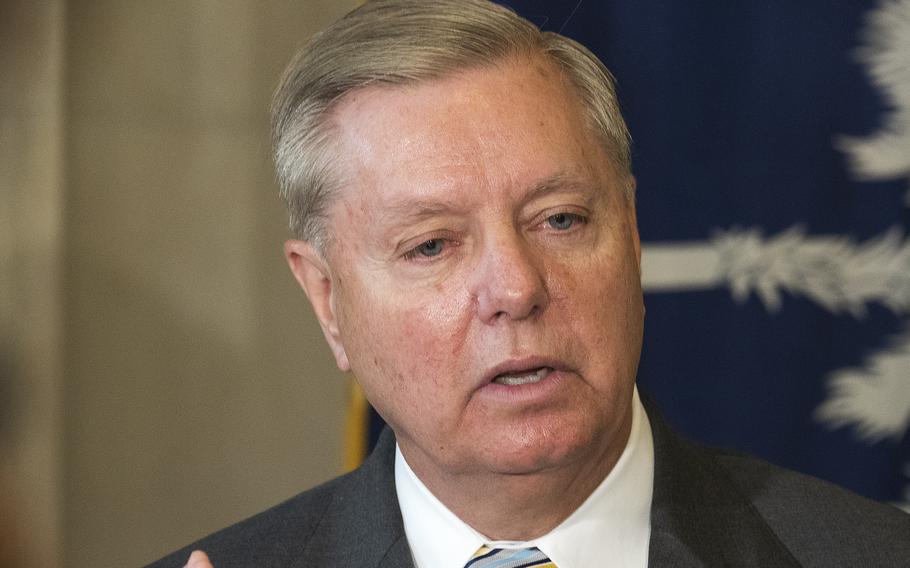 Lindsey Graham, R-S.C., speaks at a briefing on Capitol Hill in Washington, D.C., on July 11, 2018. In a tweet he posted on Thursday, March 3, 2022, Graham said anyone willing to kill Russian Vladimir Putin over his recent invasion of neighboring Ukraine would be doing a “great service” for Russia and the rest of the world, (Carlos Bongioanni/Stars and Stripes)

COLUMBIA, S.C. (Tribune News Service) — South Carolina's senior U.S. Sen. Lindsey Graham took his calls for regime change in Russia one step further Thursday night, when he tweeted that someone needs to take Russian President Vladimir Putin out over the invasion of Ukraine.

Anyone willing to kill Putin over his recent invasion of neighboring Ukraine would be doing a "great service" for Russia and the rest of the world, Graham tweeted.

Graham first made the assassination call during a Thursday night appearance on Fox News' Sean Hannity.

"Is there a Brutus in Russia? Is there a more successful Colonel Stauffenberg in the Russian military?" the Seneca Republican tweeted, referring to the men who orchestrated the assassination of Julius Caesar and attempted to assassinate Adolf Hitler, respectively. "The only way this ends is for somebody in Russia to take this guy out."

Graham continued that the only people who can stop the ongoing invasion of Ukraine are the Russian people.

Graham's communications director, Kevin Bishop, later tweeted that Graham also told Newsmax that he was OK "with a coup to remove Putin as well."

"Basic point, Putin has to go. He also noted it will be — has to be — the Russian people who do it. They control the "off ramp" to this ordeal," Bishop tweeted.

In a post to the Russian Embassy in the U.S. Facebook page, Ambassador Anatoly Antonov called Graham's statement "unacceptable and outrageous."

"The degree of Russophobia and hatred in the USA towards Russia is off the charts," Antonov said. "It's unbelievable that a country's senator preaching his moral values as a "guiding star" to all mankind could afford a call on terrorism as a way to achieve Washington's goals on the international arena."

Graham's been an outspoken opponent of Putin and his war, going so far to define Putin's actions as "war crimes." He also voiced support for a case to be brought in international criminal court, and he wants the United States to back it.

President Joe Biden, meanwhile, has not taken his rhetoric that far. On Wednesday, he told reporters that it was "early to say that" when asked whether he believed Russia is committing war crimes in Ukraine.

When asked, however, whether he believed Russia was intentionally targeting civilian areas, Biden said, "It's clear they are."