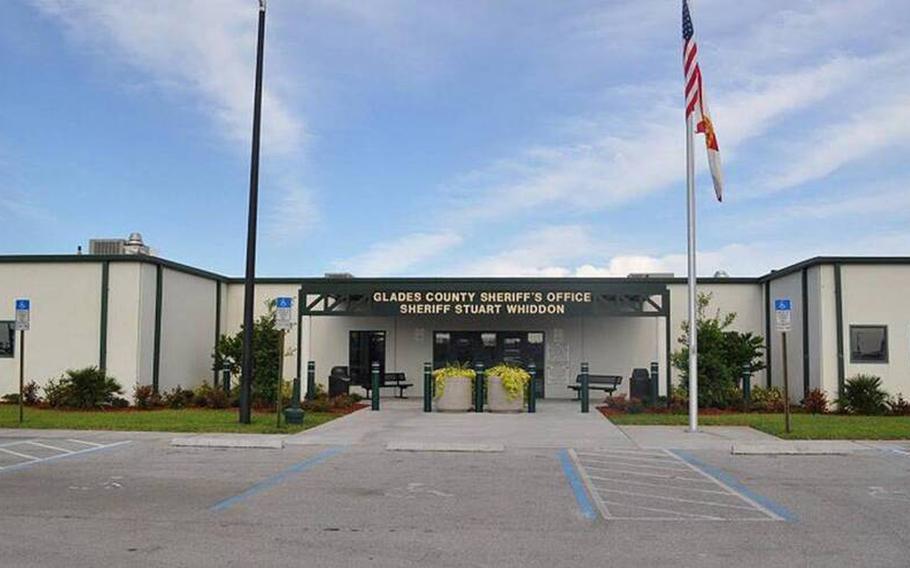 MIAMI (Tribune News Service) — Holding posters that said “free them all” and “defund hate,” about two dozen Floridians on Thursday called on the Biden administration to shut down Glades County Detention Center, which has been the target of complaints from immigration advocates and watchdog organizations.

The rally near the U.S. Immigration and Customs Enforcement office in Plantation was part of a multicity protest, “Communities, Not Cages national day of action,” asking the Biden administration to close federal detention centers for immigrants, cease deportations and free detainees in custody.

The county jail, which is run by the county sheriff’s office, is near Lake Okeechobee and has a contract with ICE to hold immigrants in federal custody.

“Now is the time for ICE and Glades County to end their contract and close this immigrant prison forever,” said Rebecca Talbot, member of anti-detention group Immigrant Action Alliance.

There have been over 35 complaints made about Glades County Detention Center since the pandemic, according to a letter last month signed by various members of the Florida congressional delegation that asked the Department of Homeland Security to close down the facility.

Glades County Chief Deputy Duane Pottorff, who has previously declined to speak about recent complaints and whose office runs the center, did not respond to a Miami Herald inquiry about the protest.

The rally came after President Joe Biden this week said during the State of the Union address that his administration needs to secure borders and fix the nation’s immigration system. He also spoke of offering a pathway to citizenship for farm workers, those who came to the United States as children and others.

Participants at the Plantation rally expressed discontent with the administration’s immigration policies.

“This new presidency has been marked by cruelty towards immigrants, it is marked by the cruelty of broken promises,” Talbot said.

ICE said the protesters had the right to express their views.

“U.S. Immigration and Customs Enforcement (ICE) fully respects the Constitutional rights of all persons to peacefully express their opinions,” an ICE spokesperson said in an email. “That said, ICE remains committed to performing its immigration enforcement mission consistent with federal law and agency policy.”

“ICE detention is cruel, inhumane and unnecessary under any circumstance, but especially so during a deadly pandemic,” the letter said.

At the Plantation rally, protesters gathered in a field under the shadow of a large tree and chanted “no hate, no fear, immigrants are welcome here.”

The speakers, who belong to a coalition that seeks to shut down Glades County Detention Center, focused on complaints at the facility, which include allegations of racist violence, medical negligence and sexual misconduct. In late January, the American Civil Liberties Union of Florida and Citizens for Responsibility and Ethics in Washington accused the facility of illegally deleting video records.

Earlier this week, community groups sent a letter to the Environmental Protection Agency alleging harmful misuse of chemical disinfectants at close quarters within the facility and called on the agency to look into the matter. Speakers also cited a November incident of accidental carbon monoxide inhalation at the facility which led to the hospitalization of detainees.

“No person seeking a better life in this country deserves to be incarcerated and then poisoned and made sick,” said Dominique Burkhardt, a senior attorney from Earthjustice, at the rally.

Protesters criticized that a Biden mandate directing the Department of Justice to not renew contracts with private prison operators did not apply to immigrant detention centers. They also blasted Biden for maintaining Trump-era policies that affect immigrants at the southwest border such as Title 42, a public health measure that allows authorities to turn away migrants since the coronavirus pandemic began and the Migrant Protection Protocols, which requires asylum seekers to stay in Mexico while they are processed.

Biden had rescinded the Migrant Protection Protocols, colloquially known as “Remain in Mexico,” but a federal court decision forced the policy to stay in place. The Department of Homeland Security has previously said that the continuance of Title 42 is up to the Centers for Disease Control and Prevention.