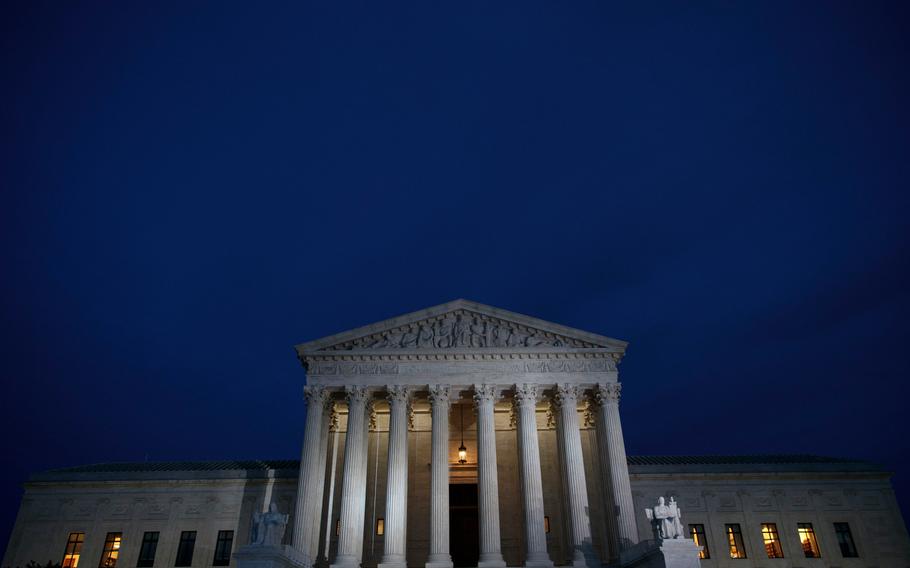 The Supreme Court on Thursday ruled 6-3 that the U.S. government may invoke the “state secrets” privilege to block former U.S. contractors from testifying about the now well-known waterboarding and torture of prisoners held at CIA sites in Poland. (Drew Angerer, Getty Images/TNS)

WASHINGTON (Tribune News Service) — The Supreme Court ruled Thursday the government may invoke the "state secrets" privilege to block former U.S. contractors from testifying about the now well-known waterboarding and torture of prisoners held at CIA sites in Poland.

By a 6-3 vote, the justices said the U.S. government can claim a privilege of secrecy even if it is not a secret.

"We agree with the government that sometimes information that has entered the public domain may nonetheless fall within the scope of the state secrets privilege," Justice Stephen G. Breyer said for the court in U.S. v. Abu Zubaydah.

He said it could "significantly harm national security interests" if the former CIA contractors testified that prisoners were held and tortured in Poland, "even if that information has already been made public through unofficial sources."

"There comes a point where we should not be ignorant as judges of what we know to be true as citizens," Gorsuch wrote. "This case takes us well past that point. Zubaydah seeks information about his torture at the hands of the CIA. The events in question took place two decades ago. They have long been declassified. ... Ending this suit may shield the government from some further modest measure of embarrassment. But respectfully, we should not pretend it will safeguard any secret."

Abu Zubaydah was shot and captured in Pakistan in 2002, and at the time, U.S. officials wrongly believed he was a close associate of Osama bin Laden who could reveal the next plot to attack this country.

When he revealed little, he became the CIA's first victim of its brutal post-9/11 methods for seeking to extract information.

For 83 times in one month, he was strapped to a board while water was poured into his mouth and nose, according to the Senate Select Committee on Intelligence. The aim was to simulate drowning.

He was hung naked from hooks on the ceiling, spent 11 days in a tiny coffin, was slapped, thrown against a wall and deprived of sleep for 11 consecutive days. He lost an eye and since 2006 has been locked up at the U.S. military prison at Guantanamo Bay, Cuba, facing no charges but given no opportunity to speak about what happened to him.

In 2010, lawyers for Zubaydah filed criminal complaints in Poland and before the European Court of Human Rights seeking to expose what happened to him. When a Polish prosecutor asked the Guantanamo prisoner to submit evidence, U.S. officials said he was being held "incommunicado for the remainder of his life."

His attorneys then went to a federal judge in Washington state, relying on a law that authorizes testimony that is needed by a "foreign or international tribunal," and sought testimony from the two CIA contractors, James Mitchell and John "Bruce" Jessen, who designed the system of interrogations.

Lawyers for the outgoing Trump administration appealed and argued the case should be dismissed based on the state secrets privilege. They said U.S. authorities had not admitted that the CIA had secret prisons in Poland.

The state secrets privilege was first invoked in 1953 supposedly to protect military secrets from being revealed in court. But it has expanded since then to block court testimony on matters that might embarrass the government.