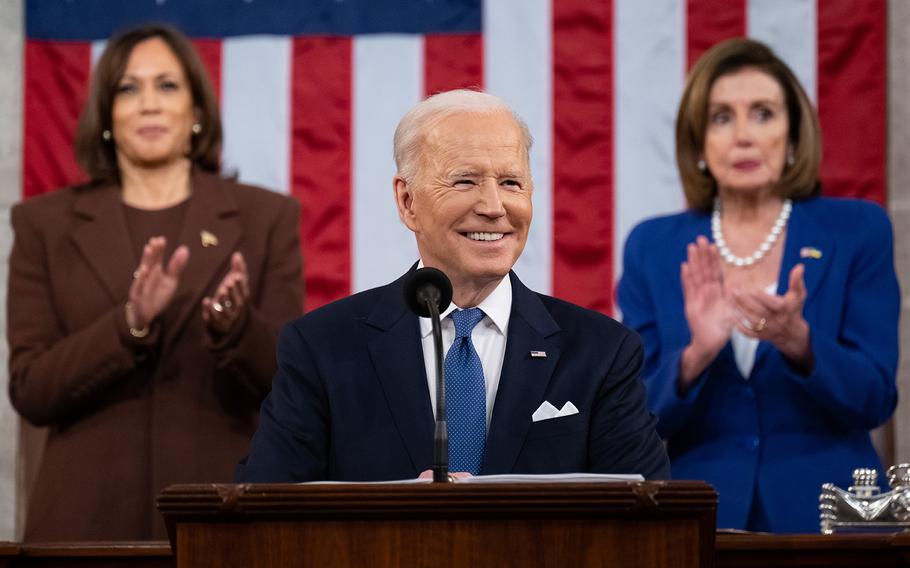 U.S. President Joe Biden delivers the State of the Union address to a joint session of Congress in the U.S. Capitol House Chamber on March 1, 2022, in Washington, DC. (Saul Loeb, Pool/Getty Images/TNS)

WASHINGTON (Tribune News Service) — The White House is asking Congress for $32.5 billion in emergency funding to boost its response to Russia’s invasion of Ukraine and tackle the ongoing fight against the coronavirus.

President Joe Biden’s administration has requested $10 billion for Ukraine, money that will be used to address the mounting humanitarian crisis as well as assist its defense against Russia. Of that, $4.8 billion would go to the Pentagon and $5 billion to the State Department, with the remainder going to the departments of Treasury, Commerce, Justice and Energy.

For the fight against COVID-19, the administration asked for $22.5 billion for immediate new investment in testing, anti-viral treatments and improved vaccines in anticipation of a possible new variant and subsequent wave of infections. Funding would also flow to global vaccine efforts.

The request comes amid negotiations over how to fund the government. Without Congressional action, critical federal agencies will run out of money around March 11 and could struggle to respond adequately to either emergency. The White House is asking that the new funds be included in that effort.

The funding request is designated as “emergency,” meaning it would come above and beyond regular agency levels. That crucial distinction should resolve a dispute over whether to cut Pentagon funds to pay for the Ukraine response and help garner Republican support.

The funds are in addition to the $650 million in security aid and $52 million in humanitarian aid the U.S. already has committed to Ukraine over the last year as well as a previous $1 billion sovereign loan guarantee. The request is likely to get bipartisan support as Democrats and Republicans rush forward with pledges to assist Ukraine.

Shalanda Young, the acting director of the Office of Management and Budget, said in a letter to Congress she expects additional requests for emergency funding for both crises.

“Given the rapidly evolving situation in Ukraine, I anticipate that additional needs may arise over time,” Young wrote in the letter, dated March 2. “This funding request is based on the administration’s best information on resource requirements at this time, and we will remain in touch with the Congress in the coming weeks and months as we assess resource requirements beyond these immediate needs.”

The combined funds could be added to a broad government spending package that Congress is trying to finish by March 11, when the current temporary spending bill lapses. Officials caution that the situation is fluid and that estimates could change.

The House draft of an estimated $1.5 trillion omnibus spending package that Republicans and Democrats are working on ahead of the March 11 deadline already includes $757 million for Ukraine, including $125 million through the Foreign Military Financing Program and $275 million for the Ukraine Security Assistance Initiative.

The $10 billion in additional Ukraine aid the White House is seeking includes $1.8 billion to cover deployments to the region, $1.25 billion for cybersecurity and intelligence, $1.75 billion to replenish supplies already given or pledged to Ukraine, $2.75 billion in humanitarian aid, $1.75 billion in economic aid and $500 million in military aid. It also includes funding for export controls and sanctions, for integrating Ukraine’s electrical grid with Europe’s and for a Department of Justice task force targeting on Russian oligarchs.

On COVID aid, the White House has steadily been ratcheting up warnings that its response was running out of money. The administration on Wednesday unveiled a new roadmap for pandemic preparedness, highlighting the availability of vaccines and therapeutic treatments that will help the U.S. move out of a crisis-level COVID response, but warning Congress would need to allocate more.

The new COVID aid request includes $12.2 billion for procurement of vaccines — including those for kids — as well as antiviral pills and monoclonal antibody treatments, $2 billion for testing and other funding to prepare for any future variants.

It also includes a request for $2.6 billion to expand U.S. vaccination efforts abroad, and $1.7 billion for treatments, tests and supplies for high-need overseas populations.