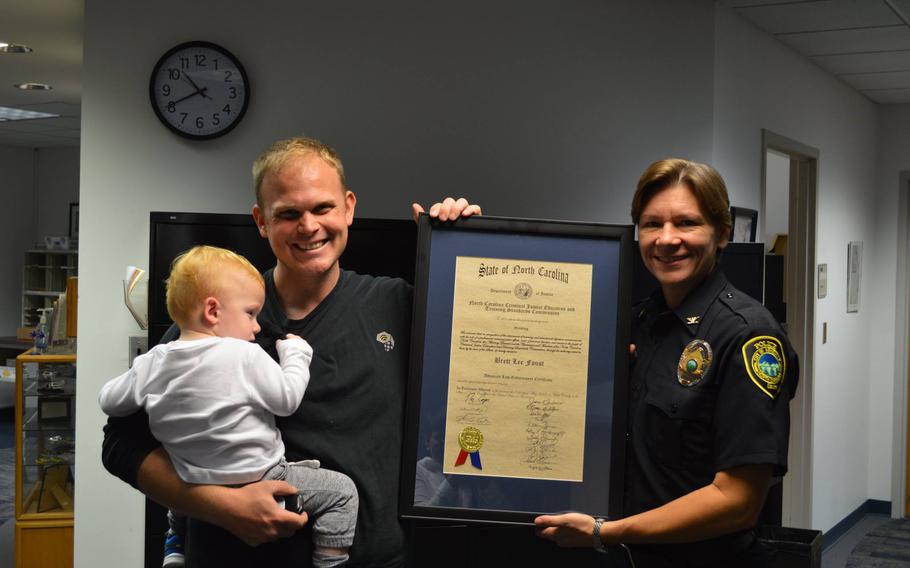 (Tribune News Service) — A police sergeant in Western North Carolina said he faced discrimination within his department after being called up to active duty in the National Guard to help with the state’s response to the COVID-19 pandemic.

The N.C. National Guard involuntarily activated Sgt. Brett Foust with the Asheville Police Department several times in 2020 and 2021, his lawyer said in federal court documents. When he returned to the police force, Foust was reportedly denied training opportunities and nearly declared unfit for duty unless he passed multiple fitness exams.

“The APD did not have cause to send him for a fitness for duty examination, failed to follow policy in doing so, and only sent him on leave as a pretext to substantiate an intended termination of Sergeant Foust’s employment,” the lawsuit states.

In doing so, his lawyer said, the Asheville Police Department violated a federal law known as the Uniformed Services Employment and Reemployment Rights Act, which protects members of the military from discrimination in civilian jobs. Representatives from the city and the Asheville Police Department did not immediately respond to McClatchy News’ request for comment on March 1.

According to the complaint filed Feb. 24 in the Western District of North Carolina, Foust enlisted in the National Guard in 2000 and served various tours in Iraq, Afghanistan and Guantanamo Bay, Cuba.

He was hired as a patrol officer in the Asheville Police Department in 2014 and was promoted to sergeant in 2019, the suit states. Foust’s lawyer said he later became a field training officer in August 2020, which came with a pay raise.

The N.C. National Guard first called up Foust in April 2020 to help the N.C. Department of Health and Human Services with its contact tracing program, according to the complaint. He returned to work at the end of May but was called up again from September 2020 to March 2021 to manage food bank operations in Western North Carolina.

During Foust’s second stint with the National Guard, his lawyer said the Asheville Police Department underwent some leadership changes in which a new captain took over the patrol division in which Foust worked.

Foust lost his position and pay raise as a field training officer soon after, according to the lawsuit.

He was also denied requests to attend two different training sessions — one for law enforcement leadership through the FBI and a second for firearms instructor training, his lawyer said. When he voiced concerns with the police chief about possibly being retaliated against for his military leave, the chief reportedly told him he “would not tolerate retaliation but that people will find a way to retaliate.”

The chief also noted that the captain overseeing Foust “has trouble dealing with people,” the complaint states.

Soon after his return, Foust asked for a new patrol car with a protective cage, his attorney said. But just before he was scheduled to pick it up, his captain reportedly interceded and denied the request.

Over the next several months, Foust reportedly became the target of at least seven administrative investigations and four disciplinary actions that his lawyer described as “baseless.” Most of the infractions involved issues with his body camera not being turned on, which he said had been unknowingly set to “stealth mode.”

Foust met with the chief again in September to express his concerns, according to the lawsuit, and the chief reportedly “reiterated that dealing with people was not one of (the captain’s) strengths.”

Then, on Oct. 7, the department revoked Foust’s police powers, confiscated his service weapon, badge and vehicle and put him on indefinite leave until he passed a fitness exam, the complaint states. Foust was reportedly told that “two memorandums had been written about him” that would be given to the police department physician overseeing his test, but Foust was not allowed to see either of them.

He passed his first fitness test on Oct. 12, and the doctor referred him for a second test conducted by a third party, the suit states. Foust remained on leave and went for his second test in Charlotte at the beginning of November, his attorney said.

During the test, the examiner spoke with Foust and reviewed information given to him by the police department, at which point he reportedly said something along the lines of “I thought it was going to be one of these.”

“Sergeant Foust understood this comment to mean that his referral was unnecessary, there were ulterior motives for the referral, and that he was obviously fit for duty,” his lawyer said in the lawsuit. “The examiner also stated that the APD would not like his conclusions.”

Foust did not return to active duty until Dec. 8 after his attorney contacted the police department, according to the complaint. He reportedly remains on “light duty” because of an injury to his wrist he previously sustained on the job.

On his first day back at the office, Foust’s lawyer said, his police captain “opened the window to her second-floor office, and yelled outside in front of numerous people, ‘Well, well, well, look who came back.’” She also talked loudly about his personnel and medical information through the open window, according to the lawsuit.

“(The captain) intended to and did in fact humiliate, embarrass, and disparage Sergeant Foust by yelling these things at Sergeant Foust in such an open forum,” the complaint states.

His lawyer said another officer has since been promoted to Foust’s position and it is “unclear” whether he will be able to return to the same position once his wrist heals.

The lawsuit seeks an injunction mandating that the Asheville Police Department comply with federal law and stop all discriminatory actions, restore Foust’s rank and salary from before he left for active duty in the fall of 2020, wipe his record of all investigations and disciplinary actions as well as pay damages.

The city has not yet responded to the complaint, court filings show.