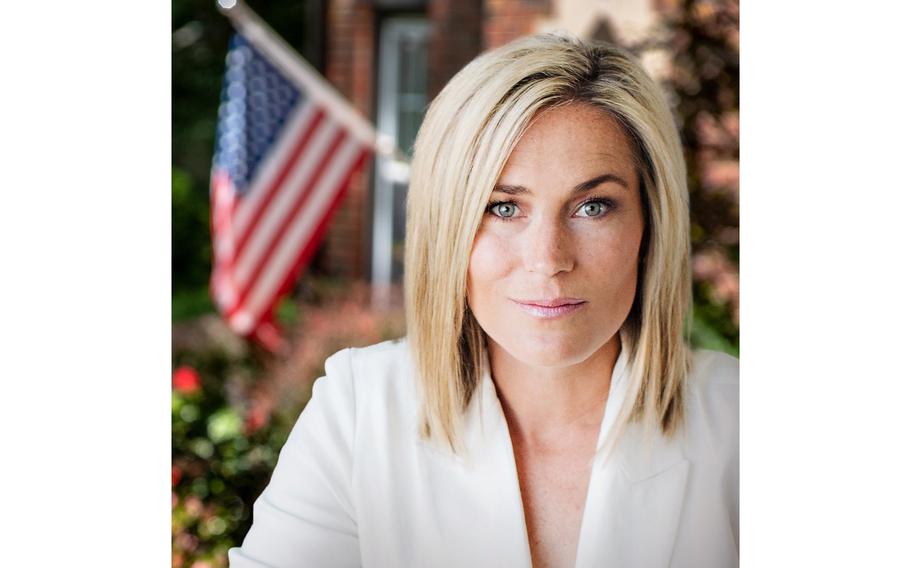 Tiffany Smiley, a veterans advocate from Pasco in southeast Washington, has emerged as the likely Republican challenger to U.S. Sen. Patty Murray, the Democrat who is seeking a sixth term this fall. (Tiffany Smiley/Facebook)

(Tribune News Service) — Tiffany Smiley has never held elected office, or even run for one, but in 2022 she's taking on one of Washington state's most powerful politicians.

Smiley, a veterans advocate from Pasco in southeast Washington, has emerged as the likely Republican challenger to U.S. Sen. Patty Murray, the Democrat who is seeking a sixth term this fall.

She's been endorsed by national Republican leaders looking to expand the midterm map, taking advantage of inflation angst and President Joe Biden's weak approval ratings in an effort to win back a Senate majority.

As a political newcomer, Smiley's chief task is to boost her own name recognition while convincing voters that Murray's long Senate tenure has put her out of touch with ordinary people.

"Patty Murray has been in office for almost 30 years. I was 11 years old in Washington state when she was first elected and it's time for change," Smiley said in an interview last week as she swung through the Seattle area to help train campaign volunteers.

Smiley, 40, is a former nurse whose life was forever altered in 2005, when her husband and high school sweetheart, Scotty, was severely wounded by a suicide bomber while on an Army deployment to Iraq. Shrapnel left him permanently blinded.

Smiley, then 23, quit her job to become a full-time caregiver and advocate for her husband, battling a sometimes maddening military bureaucracy and going on to push for better medical care for all served by Department of Veterans Affairs hospitals.

Scotty Smiley went on to be the first blind active duty Army officer, and the couple built a motivational-speaking business out of their experiences. She met with then-President Donald Trump in 2017 to offer advice on improving the VA.

Smiley says those experiences, as well as her role as a concerned mother to three boys, qualify her to represent Washington in the U.S. Senate, portraying herself as a common sense problem-solver.

"I have a track record of taking on hard challenges and working with a variety of people to accomplish the mission," she said.

Murray, 71, was first elected to the Senate in 1992 and has risen to become its sixth most senior member and third-ranking Democrat. She chairs the powerful Senate Committee on Health, Education, Labor and Pensions and sits on the Appropriations Committee, allowing her to direct billions of dollars in federal spending to Washington.

Asked whether Washington state benefits from Murray's clout, Smiley said, "I'm very positive I could do the same for Washington. I'm not here to take anything away. I'm here to add to Washington."

In highlighting her fight for veterans care, Smiley is taking on an issue that Murray has also championed for decades.

In 2018, Smiley praised Murray's veterans work in a pair of Facebook posts, posing with her in a photo, and calling her support of veteran caregivers "truly remarkable!" The posts have since been deleted or hidden. In the interview, Smiley said, "I'll work with anyone to advance a cause for our veterans."

Smiley has so far campaigned on broad themes with few specifics.

She argues Murray has grown aloof and even invisible to most Washingtonians. The state's senior senator has been known for shunning in-person town halls even before the COVID-19 pandemic, preferring more controlled events with friendly audiences.

"We need to get back to the real grassroots and a senator for the people, and not just siding with Joe Biden every time," Smiley said.

Smiley slams Murray and other Democrats for the recent spike in inflation — the highest in four decades — saying it is eating away at family budgets.

In a statement through her campaign, Murray said she goes to work in Washington, D.C., "thinking constantly about what I can do to lower costs for people in Washington state and give them some breathing room, whether it's a young family just getting started in Tacoma or a senior living on a fixed income in Spokane.

"That's why I fought to pass one of the largest middle-class tax cuts in history just last year, it's why I am still fighting to dramatically lower costs for things like child care, health coverage, and prescription drugs."

Smiley says Democrats have led an irresponsible spending binge, pointing to the national debt that has topped $30 trillion. She opposes the Democrats' stalled "Build Back Better" plan, which would direct $2 trillion to an array of child care, climate and social programs.

But Smiley declined to name any current federal program or area of spending she would cut, and at times talked about expanding government aid for the benefit of schoolchildren. She also said she wants to cut taxes.

Democrats are already working to paint Smiley as too extreme, linking her to Trump and hammering at her views on abortion.

In October, Smiley told reporters she backed a controversial Texas law banning virtually all abortions, and allowing private citizens to sue doctors or anyone assisting in an abortion, according to a report in The Hill.

Smiley took a different position last week, saying in the interview she does not support the Texas law, which "went completely overboard."

Smiley said she is personally against abortion but suggested the topic was not relevant to the Senate race because Washington voters had long ago backed legal protections for abortion rights.

In a statement, Tina Podlodowski, chair of the state Democratic Party, said national Republicans "are pushing Tiffany Smiley on us so they can flip the Senate for Mitch McConnell and push their extreme agenda ..."

Smiley faces an uphill battle running as a Republican in a state where the party has been largely shut out of statewide races for decades.

Washington has not sent a Republican to the U.S. Senate since Slade Gorton was defeated by Maria Cantwell in 2000. The party hasn't won a gubernatorial race here since 1980. And with Secretary of State Kim Wyman's departure for a job in the Biden administration, there are no Republicans holding statewide elected office.

Podlodowski said she's "very confident" that Murray can weather a political storm, as she did in 2010 by beating Republican challenger Dino Rossi amid the Tea Party backlash to President Barack Obama. Murray's campaign has a big cash advantage, starting the year with $7 million in the bank, to Smiley's $1.7 million.

Still, there are signs the race could be close if a midterm backlash hits Democrats hard enough.

"[Smiley] is the most credible, and best financed challenger we have had running for U.S. Senate in a long time," said state Republican Party Chair Caleb Heimlich, in an emailed statement.

The race was shifted from "safe Democratic" to "likely Democratic" last week by Sabato's Crystal Ball, the respected political analysis and handicapping newsletter published by the University of Virginia, which cited polling as well as Smiley's "uplifting life story."

A poll this month found Murray with 50% support to 41% for Smiley, with 9% undecided. The statewide poll of 700 likely 2022 voters was conducted by Public Policy Polling for the Northwest Progressive Institute.

A Crosscut/Elway poll of 400 registered voters in January suggested an even tighter race, with Murray leading Smiley 42% to 39%, and 19% undecided.

"I think she has the chance to run a competitive race," said longtime Republican political consultant Randy Pepple. "The political environment this year favors the message she is trying to deliver."

With months to go before the official candidate filing deadline in May, the Senate candidate field could still shift. Several lesser-known candidates have filed paperwork with the Federal Election Commission, but none has raised more than $13,000.