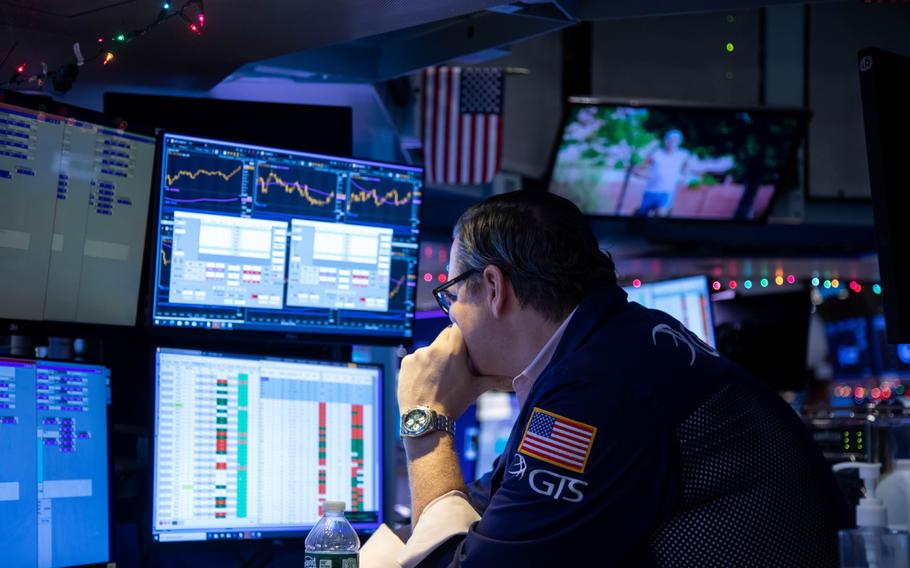 Global markets reeled Monday, with the Dow poised to shed more than 1 percent at the open as investors reckon with the fallout from fast-growing sanctions penalizing Russia for its invasion of Ukraine.

Stocks slumped ahead of another busy week of earnings and economic data as investors kept their focus on the fast-unfolding crisis, with emergency United Nations meetings Monday while delegations from Russia and Ukraine convened for the first time on the Belarus border. Recent sanctions targeting major Russian banks and companies have enraged Russian President Vladimir Putin, who called the measures "illegitimate" and ordered his nuclear forces to a higher state of alert.

The three major U.S. indexes were poised to open 1.2 percent lower across the board, which would wipe out much of the gains from Friday's rally. European markets were broadly in negative territory in mid-day trading, with France's CAC40 declining 2.3 percent and Germany's DAX giving up nearly 1.7 percent.

In recent days, the United States and its allies have moved to bar several major Russian banks from SWIFT (a global monetary transfer service), crack down on Russian oligarchs and prevent Russia's central bank from bailing out the domestic economy.

Russia responded by more than doubling its key interest rate from 9.5 percent to 20 percent on Monday. In a statement, the Bank of Russia said the hike, one of the largest one-time increases in recent memory, was due to a drastic change in "external conditions for the Russian economy." The bank also froze the opening of its stock market and delayed trading on domestic debt and currency markets. The moves led Russians to crowd ATMs in a desperate bid to withdraw cash.

Markets loathe uncertainty, and volatility is likely to rage as investors grapple with the lack of immediate resolution on the horizon with Russia and Ukraine according to David Bahnsen, chief investment officer of the Bahnsen Group.

Although the U.S. market fundmentals have weathered the storm so far, "sentiment-driven concerns are unlikely to change anytime soon," Bahnsen said Monday in comments emailed to The Post. "From a market perspective, sanctions against Russia will likely have the largest impact on currency markets, including the ruble, the Euro and the dollar."

The Russian attack is arriving at a moment when the global economy is grappling with a host of pandemic-era stressors, from chaotic supply chains to widespread labor shortages. Although investors typically shrug off geopolitical tensions, the Ukraine crisis is weighing heavily on the markets because of Russia's central role as a global energy producer. Russia produces about 10 percent of the world's oil supply, on par with the United States and Saudi Arabia, and surging energy costs will ripple quickly through the economy, fueling inflation that is already threatening the economic recovery.

Gold, a Russian export and investor safe haven in times of turmoil, continued its upward march. On Monday, it was trading more than 1.2 percent higher, around $1911 per troy ounce.

Government bonds, another safe haven, also saw pressure amid the tensions. The yield on the 10-year U.S. Treasury note edged down to 1.890 percent in morning trading. Bond yields move inversely to prices.