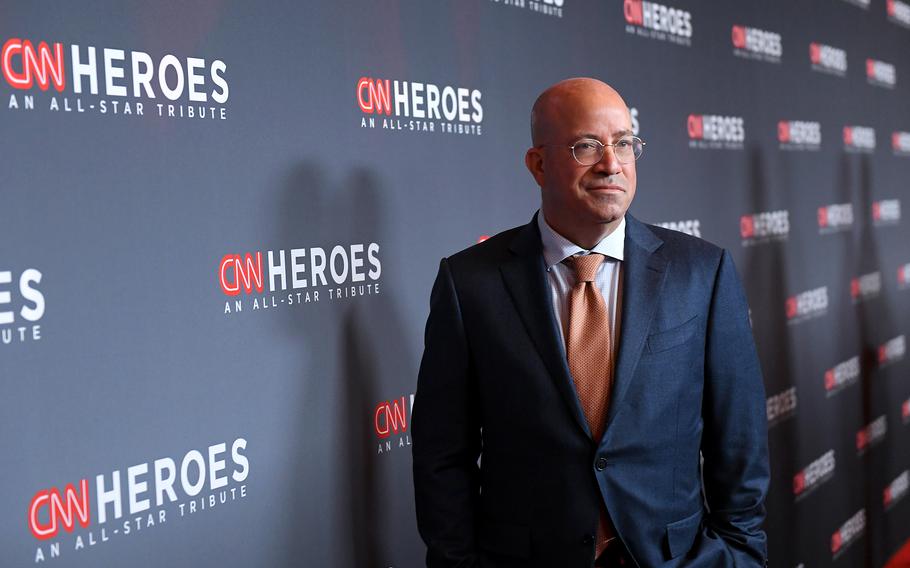 Jeff Zucker attends CNN Heroes at American Museum of Natural History on Dec. 8, 2019, in New York. Chris Licht, a veteran TV news executive and current showrunner for CBS’ “Late Show With Stephen Colbert,” is expected to take the helm of CNN after Zucker was forced to resign in January 2022 over a romantic relationship he had with a colleague. (Mike Coppola/WarnerMedia/Getty Images/TNS)

Two people familiar with the matter said that Discovery Inc. Chief Executive David Zaslav has tapped Licht for the role, which is one of the highest-profile jobs in the television news business.

His appointment, first reported in the newsletter Puck, is expected to be announced next week before the scheduled close of Discovery's merger with CNN parent WarnerMedia.

It comes during a period of upheaval at CNN, which was shaken by the exit of Zucker, who was forced to resign last month after failing to report a romantic relationship with Allison Gollust, his longtime aide and the network's head of communications and marketing. Gollust also resigned from the network.

Licht had a long run as a producer at NBC News, where he was credited for the creation of the MSNBC franchise "Morning Joe," the influential Beltway-focused morning program with Joe Scarborough and Mika Brzezinski.

Licht moved in 2011 to CBS News, where he oversaw the launch of "CBS This Morning." The program with co-hosts Charlie Rose, Norah O'Donnell and Gayle King had five straight years of ratings growth and gained a reputation as the smartest network morning show.

The program's momentum ended once Rose was fired from the network over sexual harassment allegations in November 2017. It has since been renamed "CBS Mornings."

Licht moved from CBS News to late night in 2016 to take over "The Late Show With Stephen Colbert," which had been struggling after its launch a year earlier. Licht brought more of a current affairs focus to the program, which rose in the ratings and has been the top rated late-night offering for several years.

According to friends, Licht had been in negotiations for a new deal with Colbert, as his current contract comes up in April.

But the turmoil at CNN altered those plans.

Licht had made it clear to friends that he would return to the TV news business if he could get the top CNN job.

Producers who have worked with Licht say he is similar to Zucker in his decisiveness, self-confidence and a hands-on management style as a producer — characteristics that made Zucker popular with CNN's staff and on-air talent.

Zucker's sudden departure was largely met with dismay by CNN staffers. The appointment of a leader with a similar approach as Zucker and a familiarity with the operation — Licht's wife, Jenny, has worked as a producer at CNN — is likely to be welcomed.

The new job will be a major leap for Licht, who has never run an operation as large as CNN. The news organization has 4,000 employees worldwide. Zucker ran NBC before he moved to CNN.

"He's going to find it's a tough nut to crack," said one CNN insider who was not authorized to comment publicly. "This is not like turning around 'Colbert' where it was around one show with a single talent."

But Licht will have the strong support of Zaslav, a former NBC executive and a longtime friend.

Licht also likely got the seal of approval from Oprah Winfrey, who is in business with Zaslav through OWN, which is part of the Discovery family of channels. Licht hired Winfrey's close pal King for "CBS This Morning."

The TV executive will not be able to start in his role until April, when the merger with WarnerMedia is scheduled to close.

The challenges he faces upon arrival will be daunting. CNN's share of the cable news audience has contracted dramatically in the past year. While all cable news viewing has declined since Donald Trump exited the White House in January 2021, CNN has dropped the most.

Audience levels have risen this week as the network's global resources have it well positioned to cover the Russian invasion of Ukraine. But CNN no longer dominates when an international crisis breaks out. On the first full day of coverage of Ukraine, Nielsen data showed Fox News averaging 2.6 million viewers compared with 1.4 million viewers for CNN and 1.2 million viewers for MSNBC.

Licht will also have to decide on what CNN's identity is going forward.

CNN, once criticized for being too bland, has given more air time to opinionated hosts such as Don Lemon and Chris Cuomo, whose firing for advising his brother Andrew, the former New York governor, led to the downfall of Zucker and Gollust.

The approach created more appointment viewing for CNN, which often saw its audience evaporate when the news flow ebbed. But Trump and his acolytes at Fox News portrayed CNN as having a left-wing slant, a sentiment recently echoed by Discovery Inc. board member John Malone.

Licht will likely now become a target of right-wing media for his association with Colbert, whose comeback in late night was largely driven by his biting comedy bits and monologues about Trump. Licht and Colbert turned it into an industry, producing an animated series about the former White House occupant for Showtime called "Our Cartoon President."

Another challenge will be to find a new host to replace Chris Cuomo at 9 p.m. Eastern, the tentpole hour for prime time in cable news. Licht will also have to assess CNN+, the direct-to-consumer streaming service set to launch next month. CNN+ is essential to the news organization's future as younger viewers turn to online streaming for video, and pay TV subscriptions — which provide the bulk of CNN's revenues — are in a slow but steady decline.