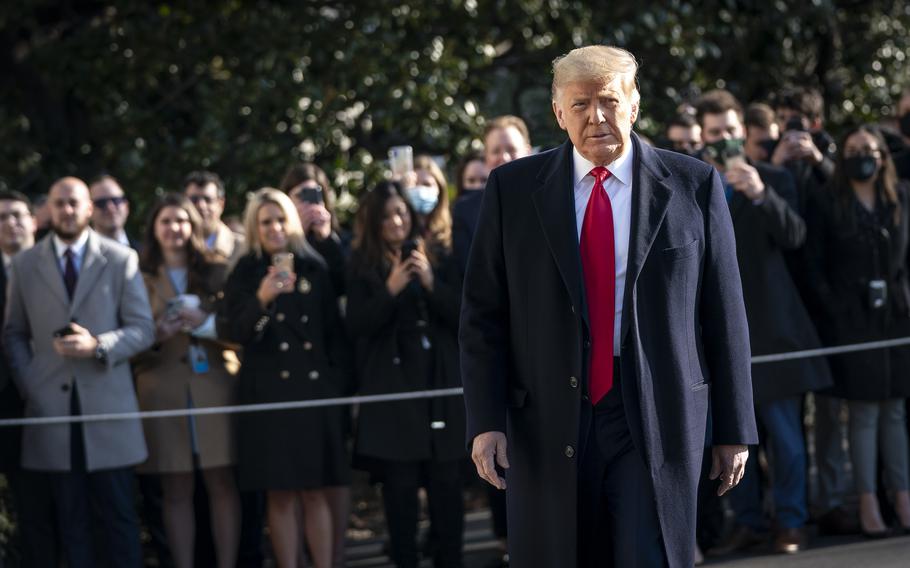 President Donald Trump exits the White House to walk toward Marine One on the South Lawn on Jan. 12, 2021 in Washington, D.C. (Drew Angerer, Getty Images/TNS)

WASHINGTON (Tribune News Service) — The U.S. Supreme Court has formally rejected President Donald Trump’s effort to block release of documents from his administration to the House Jan. 6 Select Committee, bringing a formal end to his executive privilege claims in connection with the records.

The decision follows the court’s Jan. 19 order that led the National Archives, which legally holds presidential records, to hand them over to the House of Representatives as the court weighed whether to accept Trump’s appeal.

The House committee has said it needs visitor logs, phone records, speech drafts and other written records to understand what role Trump may have played in instigating the violence that unfolded when his supporters stormed the Capitol in an attempt to prevent Congress from formally certifying Biden’s 2020 presidential election. The insurrection left lawmakers scrambling for safety and delayed for several hours the largely ceremonial, but constitutionally required, process.

In August, Rep. Bennie Thompson (D-Miss.), chairman of the House committee, asked the National Archives for “all documents and communications related to efforts, plans or proposals to contest the 2020 presidential elections results” as well as “videos, photographs and other media” from the White House that related to the Jan. 6 rally, “the march to the Capitol ... and the activities of President Trump and other high-level executive branch officials that day.”

Trump sued to prevent the dissemination of the records after President Biden determined last year that they could be released.

Last month, the U.S. Court of Appeals for the District of Columbia Circuit ruled that Trump had “provided no basis” for the courts to override Biden’s judgment that executive privilege should not be asserted on those documents. Tuesday’s Supreme Court decision ends Trump’s bid to have the Supreme Court hear his case.