Before she even knew she was pregnant with her second child, Ashley Brauer O’Connor had a dream, or maybe a prophecy. Back in May 2021, she dreamed she was scheduling a Caesarean section for Feb. 22, 2022: 2-22-22, arguably the most interesting birthday to come along in almost a decade, since 12-12-12. She soon found out she was pregnant, but her estimated due date was five days later: Feb. 27. Oh well.

Months later, her doctor informed her the baby was breech. Did she want to schedule a C-section?

“It’s been the birthday I’ve waited for. I actually I didn’t care about my 21st at all,” she says. She has always found herself gravitating toward the number two and wondered what her 22nd birthday, the fated date when all the twos in her life would align in some sort of cosmic coincidence, might bring.

“My whole life, I’ve been trying to find the meaning for it,” says Passell. “I’m still searching.”

As weirdness goes in these very weird times, Feb. 22 might not rate much more than a blip, but it does spark curious notions and a line of existential inquiry: Does it mean everything, or anything, or nothing at all? What is time, anyway, other than an arbitrary human construct that happened to, in this instance, align in a way that’s appealing to the pattern-recognition parts of our brains? Is it the ultimate Taco Tuesday?

Better: it is “Nacho Average Taco Twosday,” according to a novelty shirt that brands Feb. 22 as “a fun way to mark the unique, once-in-a-lifetime ... date for taco lovers, families and friends.” (What the shirt fails to mention is that it is also National Margarita Day. Kismet!)

Kanye West, now known as Ye, has scheduled a live performance in Miami on the 22nd, ostensibly to preview his newest release, “Donda 2.” The Atlantis resort in the Bahamas is offering 22% off, starting at $222, on hotel rooms (guests must stay a minimum of two nights). A purveyor of NFTs plans to mint 2,222 of them that day. And celebrity astrologer Aliza Kelly is going on “The Drew Barrymore Show” — it’s the actress’s birthday — to talk about what it all means.

First of all: “When we have a repeating number such as two two-two two-two, we have this sort of metaphysical thought which says that this evokes a feeling within us because it is connected to these higher esoteric metaphysical frequencies that align us,” Kelly says.

“For some people, they may see a repeating number ... as an affirmation of sorts, a sort of green light from the universe that they’re on their right path or that they’re protected, or that they have, you know, a guide or a spirit who is communicating with them, who is not earthbound.” As Kelly wrote in Allure, some people refer to those repeating digits as “Angel Numbers.”

“Pluto, in astrology, is associated with transformation and metamorphosis, and really powerful epic change that really originates from the interior before revealing itself on an exterior level,” says Kelly, who notes that although the planet’s placement will be precise on the 22nd, we’ve been feeling its effects for the last few years. Which — OK! — explains a lot, if you happen to believe in that sort of thing.

“Literally, it’s useless, because what should make that day any different from any other date, apart from the fact that humans have invented a way of counting days, and years and months? And by coincidence, that date is going to be a date full of twos, and we originate our timing from a day and a year at which a certain guy named Jesus was born,” he says. “I’m not sure there’s any bigger meaning for it.”

“It started actually as a bit of a joke,” says Heedegaard, 50. “I’m kind of a numbers geek.” To the point where he researched the places in the world that lie at 22 degrees latitude and 22 degrees longitude. There are four of them: Two in the Atlantic Ocean, one in the desert in Libya, and another in western Botswana. He’s not sure what people there are doing to celebrate the momentous occasion, but he has heard from other fans of the date: Numerologists, engaged couples, and even doomsayers, some spouting unsubstantiated claims that Feb. 22 will be the date tensions between Russia and Ukraine escalate.

Time has gotten a bit jumbled for people in the last two years, between lockdowns and working from home and the general way that living in a pandemic has unmoored us. Maybe 2-22-22 can help us restore our sense of time, Heedegaard thinks.

“I tried to make a tweet at one point, addressing the United Nations to make that date the day of self celebration and self-care,” he says. “They didn’t respond.”

It’s definitely going to be a day of celebrations, though. Especially weddings. The county clerk who presides over licenses in Las Vegas expects it to be one of the busiest days ever, beating the previous marriage record from July 7, 2007 (7-7-07). In Singapore, about 500 couples will get hitched, nine times the usual number of marriages in one day. The date is considered to be auspicious in the Chinese calendar, reports the South China Morning Post, because of its even numbers, and the fact that it is a palindrome in countries that record dates as day/month/year: 22/02/2022.

And Blake Rivera-Baggott, 30, will be driving all over the state of Tennessee, where he is a wedding officiant licensed by American Marriage Ministries. He had received more than a dozen requests from couples planning to wed that day, and had to turn most of them down — he can’t be in two places at once.

But there are three lucky couples who managed to get on his schedule. Overall, Rivera-Baggott will travel “probably over 300 miles that day.” The first ceremony is a courthouse wedding scheduled for 8 a.m., about a two-hour drive from Chattanooga, where he lives: “They’re going to get their certificate then, and then we’re going to do a little short, legal, bare minimum-type thing and then make it official.” Then, he’ll drive another hour to preside over a quick noon ceremony for another couple. Then another hour and a half of driving, where he’ll head to the biggest wedding of the day — a 2 p.m. affair with more than 50 guests, which will be timed so the couple will seal their vows with a kiss exactly at 2:22 p.m.

He’ll “have one of those little digital clocks like they have at TED Talks so that people know not to go over,” he says, adding that there may be a need to improv: To “add a little bit of fluff in there to make sure it gets to that point where that is exactly 2:22, or if I need to cut some stuff out to make sure that’s the case, I think that’s the plan.”

Meanwhile, Janelle Paulson, 27, and Ashlee Stepp, 28, will be in Mexico’s Riviera Maya, getting hitched. The Kansas City, Mo., couple met in college on Feb. 21, 2015 — “but we probably stayed up till midnight,” notes Paulson, so they can claim the 22nd as an anniversary, of sorts. They consider 22 to be their lucky number. The two twos signify two people coming together, says Stepp, whose last name Paulson will take. And they’ll always remember their anniversary.

Meanwhile-meanwhile, Amanda Casteel, 43, will be donning tulle for Tutu Tuesday, a Burning Man tradition that she’s bringing to her hometown of Portland, Ore., where she expects to be joined by “a couple hundred people” for a massive dress-up party she’s organized in a local park. The plan is for everyone to gather from 12:22 p.m. to 2:22 p.m., at which point they will take a big group picture in their tutus. Then, they’re going to “find pubs, probably along Second Street or 22nd Street” — hopefully with tacos and tequila — “and the night will end at 22:22 military time, probably [with me] distributing $2 bills at some dance club somewhere.”

Wait, $2 bills? When’s the last time anyone saw one of those? “I just went into the bank a week ago and I told them why. And they laughed and they went and talked to their manager, and she was like ‘We’ll order them and they’ll be here in a week,’” Casteel says.

And meanwhile! In hospitals across the country, there will be babies. Perhaps some will even be born at 2:22, which will make for amusing stories on local news channels.

Alex Armstrong, 30, of Boston, is having twins.

And Chelsea Campbell, 32, is due with her second child on the 22nd — and hoping the baby has a keen sense of timing. The Port Orange, Fla., resident is in a Facebook group for families expecting February babies.

“Everybody in that group is like, ‘Oh, I’m trying to get labor started now,’ and I’m trying to keep her in,” she says. “I want to last that long, so that way, she can have that birthday.”

What does a 2-22-22 birthday portend? What will the special children of Feb. 22 have in store for their lives? Numerologist Ann Perry has some thoughts on that, but they involve taking the much-hyped date down a peg or two.

There are “Popular numerologists out there that like to throw a whole bunch of hype at stuff and say, ‘Oh, it’s a portal opening up,’” she says. “I get a little frustrated with it.”

First of all: “The energy of the number two relates to partnership, to patience and diplomacy, balance, sensitivity and collaboration,” says Perry. But numerology doesn’t stop there. It’s time to do some math.

“So if you want to crunch the vibration around what February 22, 2022 is all about, you have to break it down in three parts. So February is the second month, right? So that’s going to be just the number two,” she says. Then there’s the date: 22 “Repeats itself, that’s referred to as a master number.” And then the year, for which numerologists add all the individual digits of 2022 together: 2+0+2+2=6.

“February 22, 2022 is actually a three universal day,” says Perry. “But is anyone talking about that? No. Why? Because the three isn’t as sensational as talking about all those twos.”

It’s not necessarily a bad thing that 2-22-22 is all about threes. “A three vibration, that’s encouraging us all to express ourselves. For example, telling people you’re no longer going to be their doormat,” says Perry. “It’s a lot heavier energy than all this airy, fairy, flaky stuff, talking about weddings and babies and engagements.”

Passell, the soon-to-be 22-year-old who has waited for this birthday her whole life, senses the heavy stuff. A few years ago, she met a set of twins who shared her exact same special birthday, and the trio became close friends. “Suddenly, I was a triplet,” she says. But a few months ago, one of the twins took his own life. She’s decided to spend the 22nd birthday they thought they would all spend together in Hawaii, swimming in the ocean. It’s not what she thought 2-22-22 would be, but she’s still optimistic.

“Twenty-two is going to be the year for me,” Passell says. “That’s always been a feeling of mine.” 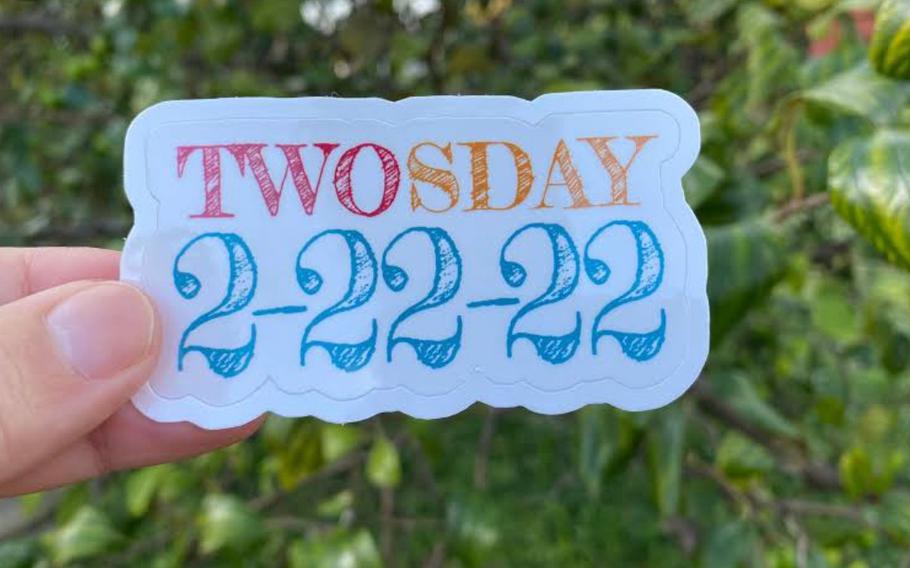