With war looming, LA’s Russian, Ukrainian expats bracing for the ‘ball to drop’ 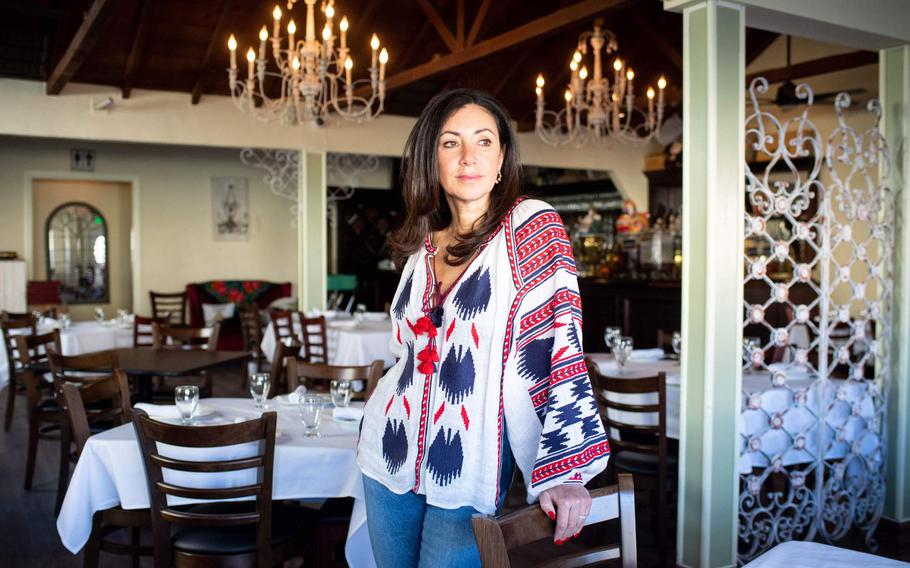 I hope there is no war and we can just argue about our borscht, is it more Russian or Ukrainian, says Ukrainian expat Rina Atroshenko at her Tarzana restaurant Traktir Russian Cuisine on Friday, Feb. 18, 2022. (Sarah Reingewirtz, Los Angeles Daily News/SCNG)

LOS ANGELES (Tribune News Service) — With a Russian invasion of Ukraine appearing imminent on Friday, thousands of miles away in Los Angeles Ukrainian and Russian expatriates who have relatives on both sides of the border are feeling anxious about what’s coming next.

“People are nervous and worried and just waiting for the ball to drop,” said Alexander Gurfinkel, a 32-year-old software engineer who moved from Ukraine as a child and now lives in West Hollywood.

Ukraine has been involved in a conflict with Russia since 2014 when former President of Ukraine Yanukovych was ousted from his office after a violent stand-off with pro-European protestors in Kyiv. Amid the following chaos, Russia swiftly occupied and annexed the Crimean peninsula and provided military support to pro-Russian separatists in Eastern Ukraine, who later declared Donetsk and Luhansk People’s Republics.

Los Angeles County is home to roughly 26,000 expats from Ukraine. Many of them believe any direct clash between the two countries would not just result in a humanitarian crisis, but it would further divide people who have families on both sides of the border.

Like many fellow Ukrainians, Gurfinkel has been closely following the news.

While most of his relatives have already immigrated to the U.S., he still has family and friends who live in the country’s capital, Kyiv.

In 2014, they watched the conflict with pro-Russian insurgents unfold but did not feel an immediate impact. Eight years later, the bloody conflict in Eastern Ukraine has no end in sight.

This time, he added, Ukrainians sense that their situation is dire, as the country faces the war on a much larger scale that could devastate the whole country.

In recent weeks, the United States has pulled its personnel from the embassy in Kyiv, urging the U.S. citizens to leave Ukraine.

The Biden administration has been warning that a Russian attack on Ukraine is imminent, even after President Vladimir Putin promised to withdraw its troops from the Ukrainian border. The Kremlin has insisted the buildup was just a routine military exercise that posed no threat to its eastern neighbor.

On Friday, Russian President Vladamir Putin announced massive drills of his nation’s strategic nuclear forces that Russian officials said had long been planned. The announcement came a day after President Joe Biden’s warning that Russia could invade Ukraine within days. He reiterated that warning on Friday, adding that he was “convinced” Putin has decided to invade, citing U.S. intelligence reports.

Ukrainian expat Kyrylo Ledovskoy said the recent news sparked memories of the 2014 attacks on his homeland.

Back then, Ledovskoy said he was glued to his screen for days, watching live streams from Kyiv documenting the pro-European protests followed by the annexation of Crimea.

Ledovskoy said he was shocked when the following year he visited his parents in Kharkiv, witnessing how his peaceful hometown near the Russian border turned into something more like a military base with tanks, heavy artillery, helicopters and “bomb shelters” signs.

In recent weeks, Ledovskoy has worked out contingency plans with his parents and other relatives still living in Kharkiv, in case their phone connection and electricity get cut off during a potential invasion.

Ledovskoy, 47, said he is trying to remain optimistic despite grim reports from home.

“There is this factor of fatigue,” Ledovskoy said in Russian. “It’s been eight years and everyone is so tired of being afraid.”

Still, as he watched the Biden administration and other Western leaders speak out against the current Kremlin’s military buildup, he said, he felt “pleasantly surprised” from reports that any potential aggression from Moscow wouldn’t go unpunished.

The eight-year-long conflict has divided Russian and Ukrainian immigrants in the U.S. into supporters and critics.

Gurfinkel said he has lost several friends since the beginning of the conflict, causing him to avoid discussing the Russian-Ukrainian conflict with fellow expats.

“It’s impossible for me to have this conversation in a room full of people without somebody coming at me and saying: ‘You’re wrong. This is the fact, this is how it happened,’” he said.

Still, many Ukrainian and Russian immigrants believed the idea of a potential war seemed unreal.

Rina Atroshenko, who left Ukraine as a child and who now owns restaurant Traktir in Tarzana, said she still perceives the two nations as one.

“When my parents immigrated, it was the U.S.S.R,” she said. “So it was one culture, cuisine, family values, and beliefs.”

Atroshenko said she would rather see her guests argue about Ukrainian and Russian recipes and whose dish tastes better than see them fight over politics.

“I would rather talk about the food and where that’s divided,” she said. “This is more Russian. This is more Ukrainian, but that is all the same culture and same cuisine, just a little different recipe. I believe everybody wants to do the same thing, everybody wants peace.”

Her friends in both Kyiv and Moscow, she added, were skeptical that the two countries were on the edge of the war, and believed the Biden administration “was stirring up the pot.”

“It reminds me of the movie ‘Wag the Dog,’” she said, adding that the U.S. was dealing with many pressing domestic issues, including crime, homelessness and gas prices. “We have so many problems here that, let’s pay attention to what’s going on there.”

“No one there actually believes that anything is going to happen,” Atroshenko, 54, said. “I think it’s more the U.S. trying to divide Russia and Ukraine.”

The two nations share more than just their love for pelmeni and cheese patties known as syrniki. They are historically and culturally intertwined.

Robert English, director of the USC School of International Relations, said the issue of Russians and Ukrainian self-identity turned into “identity games” by politicians on both sides.

All former Soviet republics, including Russia and Ukraine, are “kind of wounded, even crippled in terms of their own self-understanding, their conception of their place in the world of who they are, their identity,” he said.

For nearly 70 years, they were all denied independence, the sovereignty to pursue their own calling and their own best interests, English added.

“Instead, they had an artificial Marxist-Leninist, Soviet identity imposed on them,” he said. “So there was officially no Russian nationalism, no Ukrainian nationals, no Armenian, no Baltic nationalism because that was illegal.”

After the collapse of the Soviet Union, those republics found themselves “wounded, confused, the kind of a hole in their hearts,” English said.

But the search for their identity coincided with a dim economic outlook “in the worst possible circumstances which favored demagogues, which favored extreme nationalists and sadly demonizing other people, usually their neighbors,” he added.

Ordinary Russians and Ukrainians would get along fine, English added.

“They really just want to live a good life but the failures of their political and economic leaders, have divided them and pitted them against each other,” he said.

For Gurfinkel, the division is felt like never before.

“I just wish for the world that was as calm as 2014 was,” he said. “If we can get back to that level of calm, I’d love that to happen. I’d love this whole event to stop escalating and everybody to calm down, but in my opinion, with Putin, you never know what happens next.”