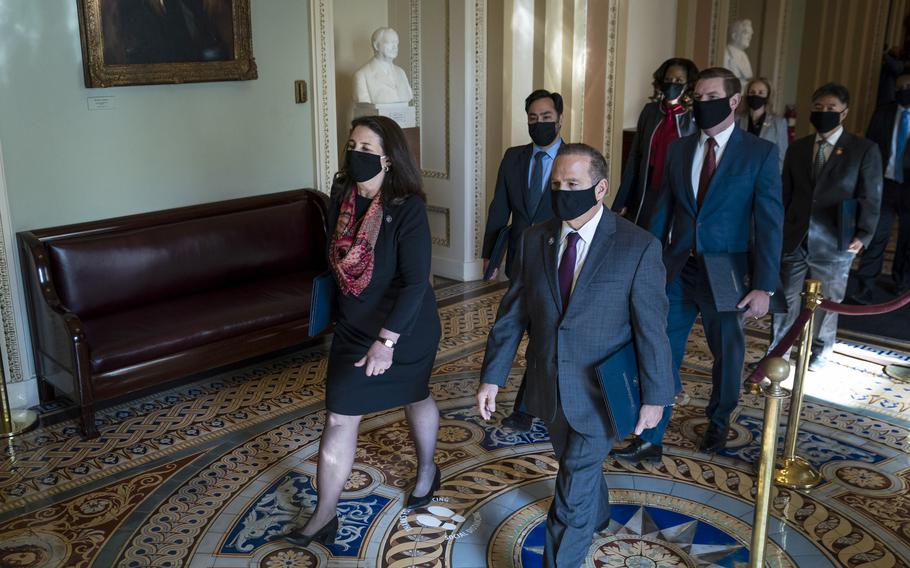 The House impeachment managers walk across to the Senate on the first day of the Senate impeachment trial on Capitol Hill on Feb 9, 2021. (Jabin Botsford/Washington Post )

WASHINGTON - Last month Rep. David Cicilline, D-R.I., sent eight colleagues a gift to mark the bonds they forged in the impeachment trial of Donald Trump after the Jan. 6 riot at the Capitol.

"Chance made us co-workers," read the message on a candle from Cicilline, noting that "crazy psycho" events made "us friends."

Rep. Ted Lieu, D-Calif., when posting a picture of the gift, clarified they were the second Trump impeachment managers because "the former president was that bad" and was impeached twice.

A year later, the nine impeachment managers have remained in close contact. They're part of the "strange club," as Rep. Madeleine Dean, D-Pa., described it, one of just four sets of House members to ever try a presidential impeachment case in the Senate.

This group has largely returned to rank-and-file status, going back to their normal committee work and providing constituent services back in their districts. They suffer from a bit of political whiplash, because while they recorded the most bipartisan conviction vote ever for a presidential impeachment, Trump has not shrunk from the limelight.

He is still considering another run for president and many House Republicans remain loyal to the former president as he continues to spout his claims about the 2020 election.

The warnings that the managers sounded during last year's trial, said Rep. Joe Neguse, D-Colo., "are just as real and serious today as they were a year ago."

Their team's leader, Rep. Jamie Raskin, D-Md., is continuing to pursue Trump through his work on the House's select committee investigating the attack on the Capitol. Rep. Eric Swalwell, D-Calif., is pursuing a lawsuit against Trump and some of his closest allies for their role in inciting the riot.

They are trying to focus on advancing President Joe Biden's legislative agenda, but one eye often lurks toward Trump and his ongoing attacks on the 2020 results. They emphasize there are no regrets, that they laid out the evidence in a compelling narrative that brought along seven Senate Republicans, falling 10 votes shy of the 67 needed to convict and prevent Trump from running for office again.

"My only regret is that 10 Republican senators did not join Richard Burr, Bill Cassidy, Susan Collins Lisa Murkowski, Mitt Romney, Ben Sasse and Pat Toomey in doing the right thing," Neguse said, naming the seven Republican senators who voted to convict. "It seems like a lot, but 10 senators is not a lot. We got 85% of the way there on conviction."

A year later, the managers are largely involved in some work related to the riot. Neguse is part of a team that is negotiating changes to the Electoral Count Act, the 1877 relic that Trump tried to exploit by pressuring Vice President Mike Pence to reject certain states' electors in hopes of overturning the election.

Neguse disagrees with the many Democrats who only want to update that law after passing a much broader legislation designed to protect voting rights - which has remained deadlocked in a 50-50 Senate, where every Republican has filibustered the package.

Cicilline is pushing his Democratic colleagues to move beyond talking about the legislative agenda ahead of the November midterm election, warning that they need to have a sharper focus on linking today's Republicans to Trump.

"We have a responsibility to call that out. This is dangerous. We cannot ignore the danger of this Republican Party," he said, making clear that Biden can largely try to stay above the fray. "He doesn't have to be in these daily battles. It's on us to correctly characterize what they're doing."

Dean has a different personal task that she first brought up during the Democratic caucus's conference call a day or two after the attacks. "We also have to catalogue the good, and I fear we haven't done that," she said referring to the bravery shown by many members as rioters ransacked the Capitol.

She noted the actions of Rep. Jason Crow, D-Colo., who served three tours as an Army Ranger in Iraq and Afghanistan, helping stunned lawmakers during the siege inside the House, and Rep. Raul Ruiz, D-Calif., an emergency room doctor with expertise on mental trauma, counseling members in real time when they sheltered in a secure location across the street.

Dean wishes congressional officials had left intact some of the damage done by the violence - a shattered window or broken benches - as a reminder to visitors to the Capitol for years to come of what transpired on Jan. 6.

Raskin views his select committee work as a continuation of where the managers left off last February. The managers focused "on one guy and one crime," Raskin explained, but the select committee is examining the "whole sequence of events" and all the players.

A year ago the managers exposed just one phone call involving Trump during the siege, from House Minority Leader Kevin McCarthy, R-Calif., pleading for him to call off his supporters. "Now we know there was nothing at all unique or anomalous about that," Raskin said, as the committee has revealed many similar calls and texts from Trump allies.

These managers almost to a person believe that Trump is weaker now, even if so many House Republicans line up directly behind him, as more information comes out about his actions in the run-up to the Capitol attack and his personal finances face heavy scrutiny in a New York investigation.

Neguse and Cicilline believe that, had another 10 or 15 Republicans voted to convict in the Senate, Trump's support would have cratered because he would have been barred from the presidency. "There would have been a significant shift in public opinion," Neguse said.

Senate Republicans, even those who oppose the ex-president, aren't so sure.

"No," said Sen. Richard Burr, R-N.C., who voted to convict, said as he held back some laughter. "I think it would've just increased the arsenal of tools."

Burr, who was censured by the North Carolina Republicans for his vote, thinks that Trump would have maintained the same level of support among base voters regardless of the outcome of the Senate trial, although he blames the media for focusing so much on the former president.

Yet even Trump supporters in the Senate are careful not to praise his behavior last year. Sen. Rick Scott, R-Fla., only cited Trump's departure from office as the reason for his vote to acquit Trump.

"You can't impeach a prior president," Scott said. As chairman of the National Republican Senatorial Committee, Scott does not want GOP candidates re-litigating the 2020 election this summer and fall.

"The election's going to be about Biden. It's a referendum on what he's done," Scott said.

Scott's words are a small consolation to the managers, akin to Senate Minority Leader Mitch McConnell, R-Ky., delivering a fiery speech blaming Trump for the riot after he voted to acquit. The managers had essentially proven their case, but didn't win the vote.

Raskin always believed the case was so strong that his goal wasn't just 67 votes. "We're going for all 100," he told the other managers, who included Reps. Diana DeGette of Colorado and Joaquin Castro of Texas.

Raskin acknowledged that he stayed up deep into the night for weeks after, playing out different scenarios of how the group could have presented the case and won the verdict. But his ideas - asking senators to not sit in partisan sides of the aisle, requesting secret ballots on votes - were brushed aside by allies in the Senate who warned him of not wanting to look like "Professor Raskin in the Senate."

Just after the final votes, Dean gave everyone a gift: a flask with the Capitol logo on it.

Democratic Del. Stacey Plaskett, a former prosecutor who is the nonvoting delegate from the Virgin Islands, poured some rum. They toasted their effort.

"What an honor," Dean recalled. "What an extraordinary honor to be part of that team. I believe we did it pretty damn well."