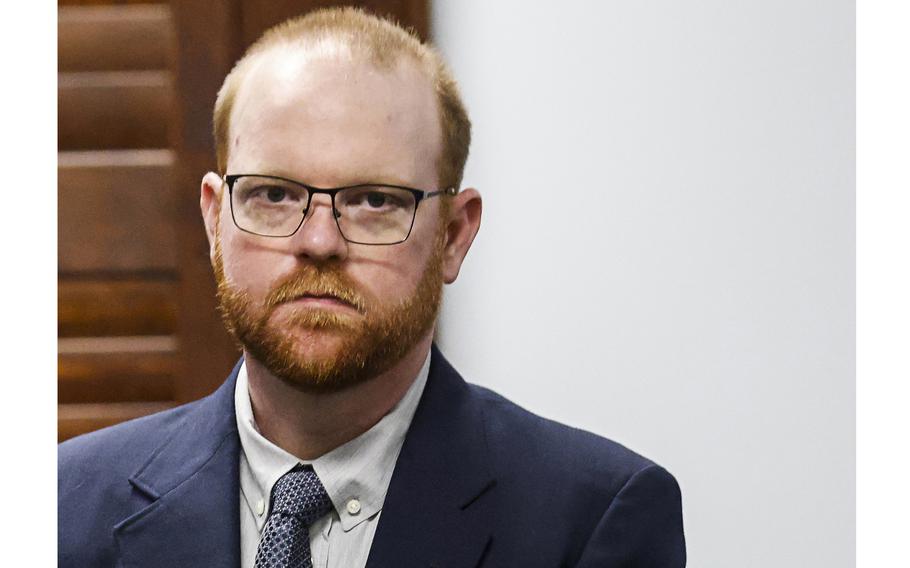 BRUNSWICK, Ga. (Tribune News Service) — A woman Travis McMichael supervised during his time in the U.S. Coast Guard broke down on the witness stand Friday as she told the jury he repeatedly insulted her when he discovered she had previously dated a Black man.

Kristie Ronquille, who still serves in the Coast Guard, said she was stationed with McMichael in Pascagoula, Mississippi, in 2011.

McMichael outranked her at the time, but the two had friends in common and saw each other in social settings on several occasions, Ronquille said. The Kentucky native broke down as she told jurors about a time she was insulted by McMichael after turning on an NBA game and recognizing a player she had dated in high school. The player, she said, was Black.

Travis said disparaging things after learning of her dating history, she testified, and began calling her a “(n-word) lover, she alleged

“It took me back and I felt disrespected,” said Ronquille.

Asked by assistant U.S. Attorney Tara Lyons why she never reported McMichael, Ronquille said had only recently finished basic training at the time, referring to herself as “still green.” She also said she was worried because McMichael was her supervisor.

“It was the first time I’d ever heard remarks used like that,” she said, crying.

Ronquille said that McMichael called her that multiple times after learning of her dating history.

Amy Lee Copeland, McMichael’s attorney, said during a previous interview with the FBI, Ronquille told agents she was only “90% sure he called her that.” Copeland was unable to play the audio of that interview in court, however, and did not have a transcript of the conversation to present as evidence before lunch.

The prosecution called several witnesses Friday morning and is expected to rest its case in the hate crimes trial of McMichael, his father Greg and their neighbor William “Roddie” Bryan.

Kim Ballesteros, who lived across the street from the McMichaels for nearly a year, testified that Greg McMichael once said disparaging things about a Black woman who rented a home from him.

She recalled a conversation the two once had about rental properties in which Greg allegedly said insulting things about the Black tenant, who was behind on her rent.

McMichael described the tenant as “a big fat Black woman,” and said they often referred to her as “the walrus,” Ballasteros said.

“Did he tell you why?” Lyons asked.

“Because she was big and Black,” the woman replied, noting the conversation made her feel uncomfortable.

She also testified that Greg McMichael told her he disconnected the woman’s air conditioning during the summer in an attempt to get her to pay on time.

“You should have seen how fast her big Black ass came with the rent check,” Greg McMichael told her, the former neighbor testified.

“I was surprised,” Ballesteros said on the witness stand. “It was racist and uncomfortable and I was quite frankly disappointed.”

“Is it your testimony that Greg McMichael rented property to people of color?” he asked.

The McMichaels and Bryan were convicted of Ahmaud Arbery’s murder last fall in a state court trial and sentenced in January to life in prison. The three men are now on trial in federal court, accused interfered with Arbery’s right to use a public speech because he was Black. They are also charged with attempted kidnapping, and the McMichaels face weapons charges for their role in the chase and shooting.