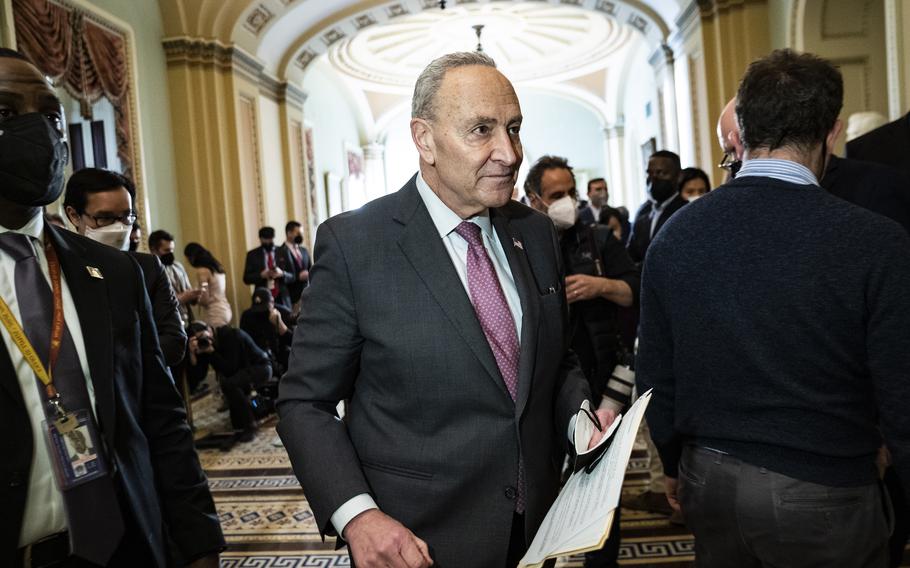 WASHINGTON - The Senate on Wednesday overwhelmingly confirmed one of President Joe Biden’s Pentagon nominees whose expertise on Russia could be critical amid the Russia-Ukraine crisis, overcoming the opposition of Sen. Josh Hawley, R-Mo.

The vote was 83 to 13 for Celeste Wallander, CEO of the U.S.-Russia Foundation, to serve as assistant secretary of defense for international security affairs. Hawley opposed the nomination, joined by a dozen other Republicans.

Hawley objected last week to a rapid confirmation process. He has blocked Pentagon nominees to protest the Biden administration’s handling of the withdrawal of U.S. forces from Afghanistan last summer.

Hawley delayed not only Wallander’s confirmation, but also that of another Pentagon nominee - David Honey, who has been chosen by Biden to be the deputy undersecretary for research and engineering.

Hawley’s delaying tactics forced Senate Majority Leader Chuck Schumer, D-N.Y., to file a cloture motion Monday night to accelerate debate and bring the nominations to the full Senate floor. After two procedural votes at midday, the Senate confirmed Wallander and then confirmed Honey on a 94-to-1 vote. Hawley was the lone dissenter.

“Intentionally delaying the confirmation of a qualified expert on Russian affairs at a time like this is supremely reckless,” Schumer said Wednesday, adding that Hawley’s actions are “making the American people less safe.”

Spokesmen for Hawley did not immediately respond to a request for comment Wednesday.

Hawley’s colleagues on the Senate Armed Services Committee also have criticized his move.

“Senators have the right to object,” Sen. Jack Reed, D-R.I., chairman of the Armed Services Committee, said earlier this week. “They also have a responsibility to America’s national security interests, particularly when Russia is massing troops in Eastern Europe. It’s time for politics to take a back seat here.”

Sen. Jeanne Shaheen, D-N.H., condemned Hawley’s efforts to slow Wallander’s confirmation amid rising tensions in Ukraine and accused him of putting national security at risk. “He’s interested in grandstanding, not in getting answers,” Shaheen said earlier this week.

On Monday, Hawley defended his decision to delay Wallander’s confirmation process by accusing Biden of pushing Europe closer to war.

“As Joe Biden’s incompetence leads Europe closer to war, Dr. Wallander seems to think we should keep doing more of the same in Europe, including bringing Ukraine into NATO, which will mean more and more American troops,” said Hawley, who opposes any effort to admit Ukraine to NATO and insists the focus should be on China.

Russia has demanded that Ukraine be barred from joining NATO; the United States and NATO have said the alliance’s open-door policy is nonnegotiable.