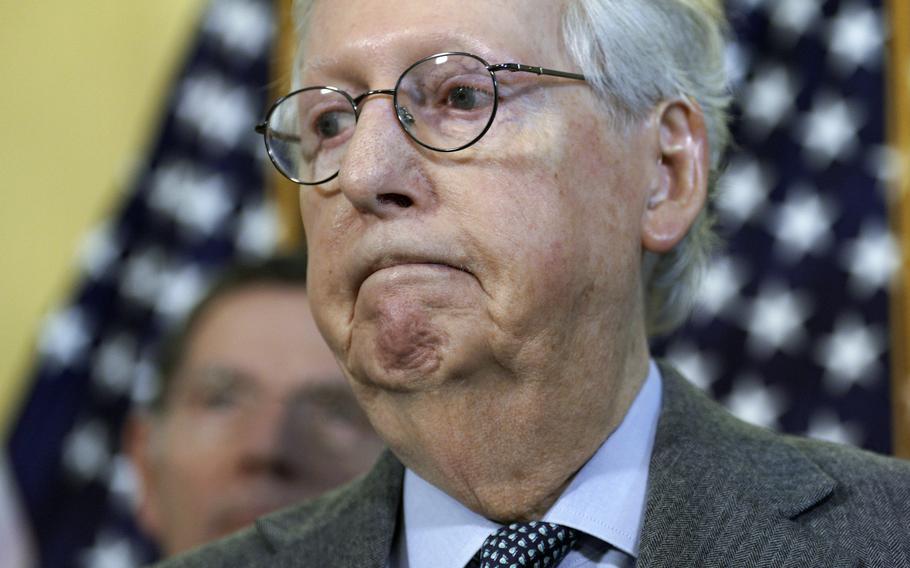 “There’s not a doubt in my mind that the Russians wouldn’t be on the border of Ukraine with 100,000 more troops had we not indicated to the rest of the world we were pulling the plug on Afghanistan and going home,” the Senate Republican leader said on Tuesday during a Capitol Hill news conference with reporters.

McConnell’s unstated implication is that the president’s decision to withdraw U.S. troops from one longtime hotspot emboldened Russian President Vladimir Putin to test American power and resolve in another place.

Though McConnell was a harsh critic of Biden’s decision to leave Afghanistan, dubbing it a “catastrophe,” he hasn’t been as directly scornful on Ukraine.

The West has spent recent days trying to decipher a flood of divergent reports on the likelihood of a Russian invasion, which McConnell said would be “unfortunate for the whole world.”

“I hope the administration is not going to wait until after an incursion to turn the screws and put some real sanctions on the Russians,” he said. “At that point, arguably, it’s a little too late.”

Sen. Joni Ernst of Iowa, a top McConnell lieutenant, asked for a more detailed plan from the State Department on how to evacuate Americans if war breaks out.

Senate Democratic Leader Chuck Schumer indicated he’s working with McConnell and other senators to put out a joint statement on the escalating crisis between Russia and Ukraine. Lawmakers have struggled to reach an agreement on a sanctions package or overarching resolution designed to condemn the Russian threat.

There were some indications that Putin was attempting to de-escalate tensions by partially pulling back a portion of the 100,000 troops that have amassed in military districts bordering Ukraine.

But NATO and the U.S. said they had yet to see real evidence of a substantial pullback.

“As long as there is hope in diplomatic resolution that prevents the use of force and avoids incredible human suffering that will follow, we will pursue it,” Biden said in remarks to the nation on Tuesday afternoon. “An invasion remains distinctly possible.”

Sen. Rand Paul said last week the U.S. should deploy both “carrots and sticks” to deter Russian aggression against Ukraine. He told Glenn Beck that the Biden administration should urge Germany to tell Russia it wouldn’t buy its natural gas if it went ahead with an invasion.