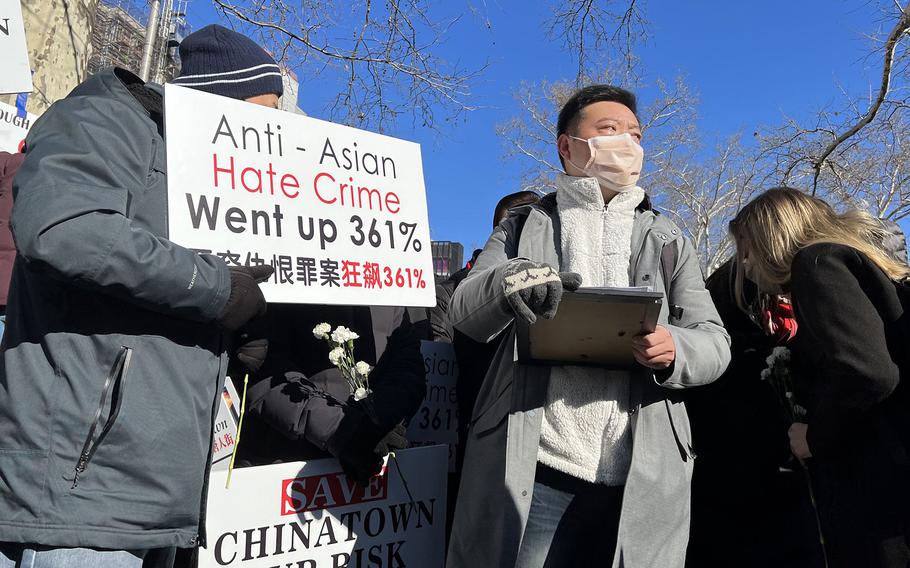 A chorus of New York’s politicians including Mayor Eric Adams called the brutal killing of Christina Yuna Lee inside her Chinatown apartment on Sunday “horrific” and promised not to let the “violence go unchecked.”

The words have provided little comfort to many members of New York’s Asian American and Pacific Islander community, who say a string of high-profile deaths and hate crimes has prompted too many vigils and public proclamations and not enough actionable steps toward a safer city.

“Enough is enough,” chanted a crowd of several dozen people who gathered outside of Lee’s apartment building on Monday to mourn her death. “Do something, New York.”

Lee, 35, was a creative producer at the music platform Splice. She was followed into her apartment building around 4:30 a.m. on Feb. 13 by a man identified as 25-year-old Assamad Nash, according to the NYPD. Emergency responders found Lee dead in her bathroom. Nash, who tried to run away through the fire escape of Lee’s sixth-floor walk-up, had barricaded himself inside her apartment.

Nash was arrested on charges of burglary and murder and remains in custody, police said. The investigation is ongoing. Nash had prior arrests, including for assault and criminal trespassing, according to court records and the NYPD.

The NYPD did not say that Lee’s killing was a hate crime. But her death follows the Jan. 15 killing of 40-year-old Michelle Go on the subway tracks of the Times Square station and the Dec. 31 death of Yao Pan Ma, 61, who was beaten in the head last April. Police increased the charges against Ma’s attacker to second-degree murder as a hate crime on Feb. 10 from attempted murder.

In New York City, hate incidents against people of Asian descent rose by 361% to 129 in 2021, from 28 in 2020, according to the NYPD. Across the U.S., hate crimes against that group rose 73% in 2020, said the FBI in October 2021. While overall crime in New York City remains at historic lows, shootings and hate incidents have risen during the pandemic.

Jackie Wong, a member of the neighborhood group Concerned Citizens of East Broadway, said, “We’ve been calling the city for actions, but the city continuously ignores us in our demands.” Dong Lee, a Chinese community activist who attended Monday’s vigil said, “Governor, I beg you, enough of the rhetoric. How many more people have to die?”

At the vigil on Monday, NYPD Inspector Max Tolentino said the city planned to engage in an awareness campaign and disseminate information in communities with predominately Asian-American residents to help them protect themselves. “No community should have to go through what the Asian community has been dealing with,” he said.

Yuh-Line Niou, whose state Assembly district includes Chinatown, called the death “heartbreaking,” and said that attending vigil after vigil has been exhausting for the community. Rally fatigue is setting in and residents are growing more angry and impatient without visible change.

“One of the things that I just felt so upset by is how inadequately funded our system is when it comes to doing basic mental health checks, when it comes to making sure that we have culturally appropriate services. Our shelters don’t even open in the daytime, many of them. So where do people go?” Niou said in an interview.To that end, Niou said she now conducts regular “wellness checks” to look after district residents. Her office has called 500,000 people since the pandemic began and hate incidents shot up. “In those moments, most of the time constituents say, ‘we’re fine, thank you for checking in.’ No big deal, right? But sometimes we have found people in very desperate and dire situations.”

She said she is also pushing New York Gov. Kathy Hochul to add more funds in the state’s $216 billion budget for Asian-American communities, which Niou said was allocated only $10 million last year. A tenth of the state’s population identified as Asian in the 2020 Census. That proportion rises to nearly a third in Queens, 15% in Brooklyn and 15% in Manhattan.

“Governor Hochul is outraged by the horrific surge of violence against the AAPI community and is committed to exploring every option and deploying every possible State resource to ensure every community feels safe,” said spokesperson Avi Small.

Hochul wants to create a hate and bias prevention unit within the New York State Division of Human Rights and triple funding for law enforcement and community-based gun violence initiatives, according to recent budget proposals.

Still, the moves aren’t enough for New Yorkers like Susan Lee, 43, a nonprofit grant writer in Tribeca who said she was pushed down a set of subway stairs last February and hasn’t ridden the train since. She said the city needs “more than rhetoric” and urged lawmakers to provide services that directly impact the community. “We deserve to be safe. Not feel safe, but be safe in our own city. Our own homes,” she said at Monday’s rally.