After retrial, Marine veteran sentenced to 210 years in prison for raping girls in Cambodia 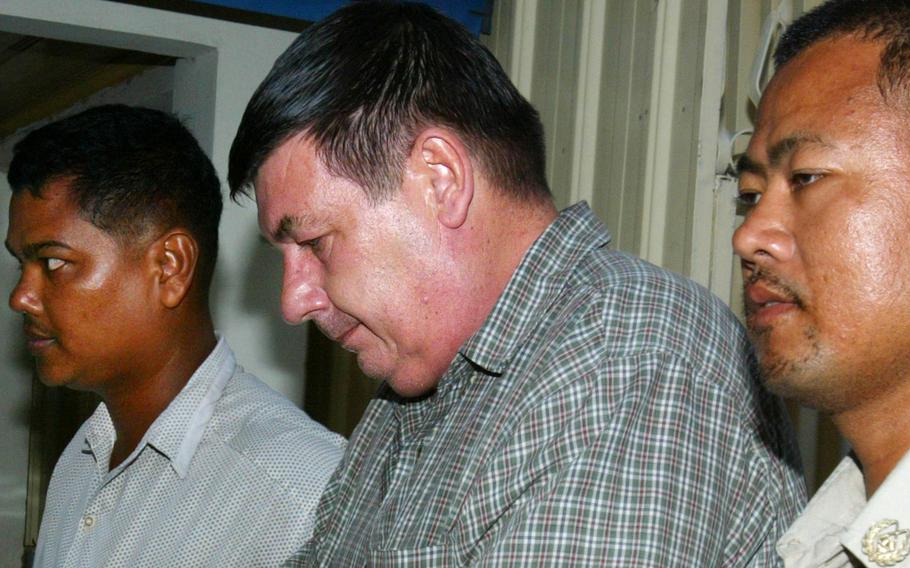 Michael Joseph Pepe, 68, has been in federal custody since 2007 and was previously convicted on separate charges that were thrown out in 2018. He was sentenced Monday by U.S. District Judge Dale S. Fischer, who called his actions “monstrous” and “horrific,” according to the U.S. attorney’s office for the Central District of California.

“What he did to those preteen girls ... was torture,” Fischer said, adding that there was “no justification for a sentence that would ever allow (Pepe) to be released from prison.”

Jurors heard testimony during a seven-day trial in August from eight victims who were as young as 9 years old when Pepe abused them, prosecutors said.

Each victim testified that Pepe had sexually abused them, with several saying that he bound, drugged, beat and raped them.

Pepe was originally arrested in Cambodia in 2006 and was brought to the United States, where he was charged in early 2007.

He was convicted by a jury in May 2008 of seven felony counts, according to U.S. Immigration and Customs Enforcement.

According to testimony presented during his original three-week trial, Pepe was working as a civilian teacher in Cambodia’s capital, Phnom Penh, when he hired a prostitute to procure children from their families in 2005 and 2006.

In addition to the victims’ testimony, prosecutors showed jurors restraints, sedatives and child sexual abuse images seized by the Cambodian National Police during a raid of Pepe’s residence in 2006.

Cambodian police began investigating Pepe after one of his victims came forward. U.S. authorities joined the investigation at the request of their Cambodian counterparts.

Despite a swift guilty verdict from the jury, the case was thrown into peril after prosecutors disclosed that the lead investigator had been involved in a sexual relationship with a Vietnamese interpreter who translated for some of the girls.

Pepe’s defense attorney contended that the relationship between ICE Special Agent Gary J. Phillips and the interpreter had tainted the girls’ testimony.

After a lengthy legal battle, he was sentenced in 2014 to 210 years in federal prison.

The 9th U.S. Circuit Court of Appeals overturned that conviction in 2018, and authorities retried Pepe on new charges.

He was found guilty in August of two counts of traveling in foreign commerce with the intent to engage in illicit sexual conduct, and two counts of aggravated sexual abuse of a child, federal prosecutors said.

A restitution hearing is scheduled for Feb. 28.