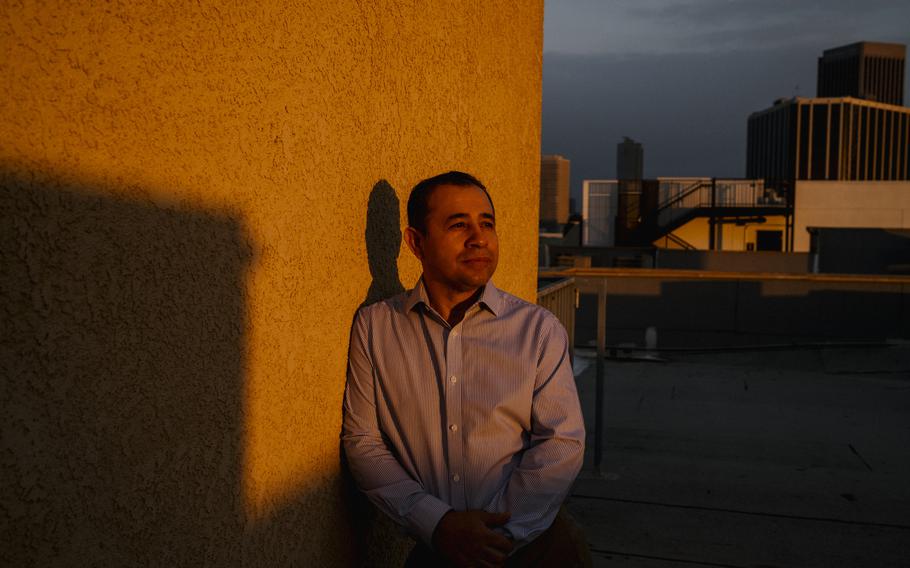 Jorge Nunez recently during the pandemic was laid off from his longtime job at the Cheateau Marmont. Here, Jorge poses for a portrait on the roof of his apartment complex where he lives on Tuesday January 18, 2022. (Mark Abramson/For The Washington Post)

After 15 years, Jacqueline Rodriguez had almost saved enough for a down payment on a house. Then the pandemic hit. Rodriguez was laid off from her job and dug into her savings to cover the rising costs of everything, including her 18-year-old son's pre-med textbooks.

If Rodriguez had been able to buy a house and lock in a mortgage, it would have helped shield her from the highest inflation she has seen in her adult life. Instead, her landlord recently hiked her monthly rent from $1,200 to $1,500. After exhausting her savings, Rodriguez struggled to pull together $50 to fill her car with gas and commute to the Miami International Airport, where she earns $13.80 an hour as a Wendy's cashier.

Lower-income workers like Rodriguez have seen some of the fastest wage growth of the pandemic era. But those gains are being eroded by the highest inflation in 40 years, and Rodriguez's paycheck doesn't go as far as it used to. A mother of three, Rodriguez has to budget $200 a week for child care and $200 a month for the water bill. The pack of paper towels she buys went from $14 to $18.

"It's outrageous how much everything has gone up," Rodriguez said. "I go to the supermarket to buy chicken, and I have to make a decision on what meal I'm going to cook based on the prices … I'm not going to buy anything luxurious. Everything is more expensive."

While inflation is rising everywhere, price hikes are particularly devastating to lower-income households with already tight budgets. Nearly all their expenses go to necessities — food, energy, housing — which have seen some of the largest increases at different points over the past year.

Of the 10 categories with the highest levels of pandemic inflation analyzed by The Washington Post, lower earners spent a greater share of their total spending on most of them, from natural gas to beef. (The highest earners outspent the lowest on cars and furniture.)

With their substantial disposable incomes, higher-income households can, of course, more easily absorb the rising cost of necessities. But they are also less exposed to inflation in some key ways, thanks to their spending habits. They spend more of their budget on retirement accounts, mortgages and investments, and less on the necessities, such as energy or groceries, that are squeezing budgets around the country.

Wealthier Americans also have stronger protections shielding them against rising prices. Substantial retirement savings and investments tend to outpace inflation in the long run. They already own their homes on fixed-rate mortgages, and when prices rise they can pocket the equity or charge tenants more. And while prices have also risen for wealthy households, they can cushion against inflation's bite by dipping into savings, tapping home equity or cutting extra spending — by eating out less, trimming their 401(k) contributions or holding on to a past SUV model a little longer.

Lower-income workers, meanwhile, tend to feel only the negative side of inflation. Their rent goes up. Their heating oil prices go up. Their grocery bills go up. And there's no room for higher prices in their already stretched budgets. Plus, with stimulus benefits and child-tax credit payments long gone, many have exhausted their financial cushions. Jacqueline Rodriguez stands for a portrait outside of her home in Miami, FL on Thursday, Jan. 20, 2022. Rodriguez works at a Wendy's location inside the Miami International Airport. Rodriguez has three children and has struggled to keep up with the cost of higher rent, books for her kids' schooling, even paper towels, since her wages have not been raised during the pandemic. She said she is one of three cashiers doing the work of what is normally seven employees, and the airport is busier than ever. (Scott McIntyre/For The Washington Post)

Rodriguez said she's conscious of every penny she spends. She no longer buys toys for her children. She used to buy fresh fruit at the supermarket but has cut back as fresh produce has become more expensive. Rodriguez said she's been helped significantly by her union, Unite Here, because she can also pick up groceries from them.

"For low-income Americans, a small change in disposable income is very difficult to cope with," said Xavier Jaravel, a London School of Economics professor whose publications have helped change how economists think about inflation. "Every bit of additional inflation just reduces purchasing power. If you have a large income, which often goes with the fact that you're saving a lot, then losing some of your purchasing power is not a big cost."

Fast-rising inflation is just the latest example of how the pandemic recession has widened inequality nationwide. Throughout the crisis, the economic consequences have fallen hardest on lower-income and service-sector workers whose health and livelihoods were most vulnerable to the coronavirus. Now, soaring inflation is deepening the divide, despite blockbuster economic growth and a remarkable jobs recovery.

Back in 2020, as the economy skidded to a halt with pandemic closures and 20 million people were laid off in a matter of weeks, the Federal Reserve jumped into action by lowering interest rates and pumping trillions of dollars into the financial system, fueling a strong recovery from a once-in-a-century crisis.

But those moves also triggered serious side effects. By late 2021, inflation was soaring. The tsunami of easy money also drove up asset prices, lifting wealthier Americans with investments who were less likely to suffer financially from the recession in the first place.

When asked during a news conference last month if the Fed looks at how inflation affects the most vulnerable people, Fed Chair Jerome Powell said he wasn't "aware of … inflation literally falling more on different socioeconomic groups."

Still, when inflation is high, some people, like those on fixed incomes or living paycheck to paycheck, are "prone to suffer more," the Fed chair acknowledged. "Inflation right away forces people like that to make very difficult decisions," Powell said. "For people who are economically well off, inflation isn't good. It's bad. High inflation is bad, but they're going to be able to continue to eat and keep their homes and drive their cars."

Yet a growing body of research points to lower-income households facing faster price growth than their high-income peers.

An earlier Bureau of Labor Statistics analysis found that between 2003 and 2018, inflation was consistently higher for the lowest-income households. Over that time, economists Anya Stockburger and Josh Klick found, textbooks, beef, car insurance and rent pushed price growth higher for lower earners.

In Los Angeles, Jorge Nuñez saw these spending differences firsthand while cleaning laundry at the landmark Chateau Marmont, where rooms cost hundreds of dollars per a night. Nuñez sends money home to family in Honduras and to others in the United States, so he always worked a second job elsewhere as a handyman, warehouse staffer or busboy to make ends meet.

Nuñez was making $18 an hour when he was laid off in the spring of 2020. He dug into his 401(k) and took out a $30,000 loan to cover expenses. But it wasn't enough to cover all his family's needs as prices rose. So he kept cutting back. He switched to a cheaper phone plan and sold his family's second car. When he got a job stocking items at Curacao, a popular department store, he walked to work.

Lower-income families spend an average of 11 percent of their budget on food, compared with higher-income households, which spend 7 percent on food, according to the Bureau of Labor Statistics. The rise in food prices has thus struck families including Nuñez's particularly hard.

His wife, whom he met working at the Chateau, used to make the family steak and seafood. Nuñez said he can "no longer really enjoy or really afford them anymore."

"We haven't been able to enjoy life, but are rather in survival mode," Nuñez said.

A spokesperson for the Chateau Marmont said the hotel has rehired more than two dozen former employees in 2020 and 2021 as it slowly returns to pre-pandemic capacity. The company said it has offered employees the option to return based on seniority, according to local law.

When prices started rising, middle-class families that had been shopping at, say, Whole Foods cut back by looking for sales or switching to lower-cost stores such as Trader Joe's, said Weber, the University of Chicago economist. But low-income families that had already been clipping coupons and shopping at discount stores had to pay higher prices, because they had no cheaper options. (Whole Foods is owned by Amazon. Amazon's founder, Jeff Bezos, owns The Washington Post.)

Several workers interviewed by The Washington Post said stimulus checks, unemployment benefits and the child tax credit had helped them weather job losses 2020 and 2021, but that cushion is now depleted. The most recent bank account data analyzed by the JPMorgan Chase Institute showed that as of late September, a typical low-income family had about $400 more in their account than they did before the pandemic began, indicating that stimulus had helped some families come out ahead even as costs rose.

One bright spot in the recovery is that wages have grown at the fastest pace in decades, as pandemic labor shortages squeezed employers desperate to return to business, giving more leverage to all workers, especially those in service-sector jobs. However, many of those gains have recently been counteracted by the rising costs of living, with workers in most sectors seeing inflation outpace their earnings. Leisure and hospitality workers have been among the few whose higher wages have generally remained ahead of inflation.

During the pandemic, extra income and savings accumulated by the wealthy could be invested. On average, low-income Americans only put 1.5 percent of their money in retirement accounts, compared with more than 16 percent for the highest earners.

Gary Boykins lives in Washington and prides himself on being a saver. He socks away as much of the $19 an hour he earns as a certified nursing assistant as he can. Plus, he also tries to save some of the $11.95 he earns each hour at a separate retail job he works in Northern Virginia.

Boykins has always been vigilant about carving out some of his paycheck — be it $50 or $250 — and depositing it into a savings account to build a nest egg for the future. But pandemic prices have made that commitment difficult. Rent in the studio apartment he shares with his parents has soared from just over $1,000 a month to $1,150. That's in line with the 14.1 percent rent increase nationwide in 2021, according to Redfin.

Boykins tries to save on meals during his exhausting 12½-hour shifts at a nursing facility, as employees can sometimes get free breakfast or lunch. But recently, the kitchen was short-staffed, with many workers out sick with covid. On days there was no one left to cook the meals, he could spend $40 buying food to last through his shift.

Two years into the pandemic, Boykins still tucks away a small part of his paychecks every few weeks, even if he can only swing $25. Despite the toll of his health-care job, he doesn't go on vacation, except for a day trip last year. Fridays are his only day off work. But now he sometimes works seven days a week, taking extra shifts at his retail job, just to get by.