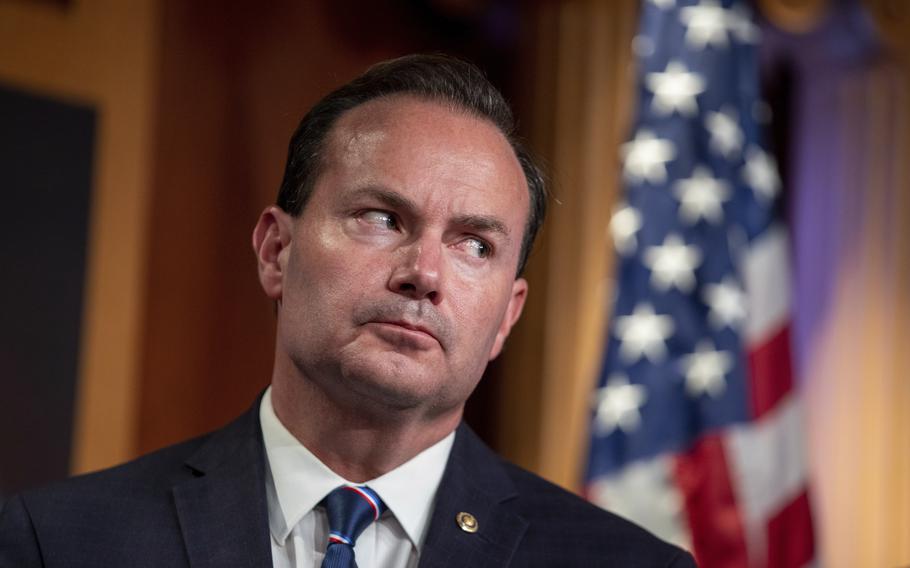 Sen. Mike Lee, R-Utah., attends a briefing on Capitol Hill in Washington on Aug. 4, 2021. Lee is getting backlash for not voting to pass the Amache National Historic Site Act, which would make the remote southeastern Colorado landmark a national historic site. (Amanda Andrade-Rhoades/AP)

DENVER — On the eve of the 80th anniversary of the forced internment of 120,000 Japanese Americans at the onset of World War II, Republican U.S. Sen. Mike Lee of Utah is getting backlash for holding up the creation of a national historic site at a former internment camp in rural Colorado.

U.S. Sen. Michael Bennet, a Colorado Democrat, says he has the support of 99 of the chamber's 100 senators to pass the Amache National Historic Site Act, which would make the remote southeastern Colorado landmark a national historic site eligible for additional preservation assistance.

But his bill, co-sponsored by Colorado Democratic Sen. John Hickenlooper, failed to pass by unanimous consent last week due to a lone objection from Lee, who opposes adding new federal lands without adequate funding and in the past has advocated for "swaps" to prevent expanding federal land ownership.

The dispute comes amid a broader reckoning about race in U.S. history as Japanese Americans strive to spread awareness about the gross injustices committed by the U.S. government against their community during World War II. 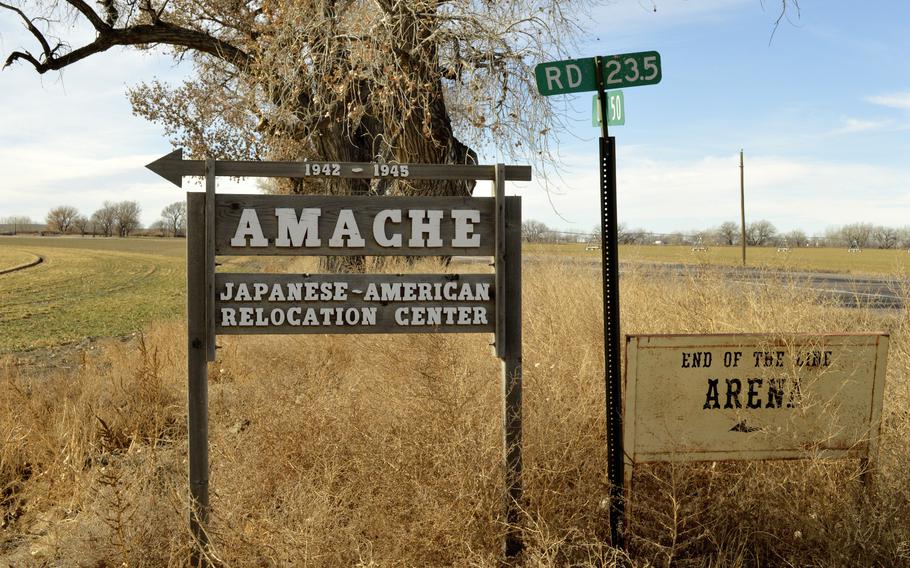 FILE - A sign stands at the entrance to Camp Amache, on Jan. 18, 2015, the site of a former World War II-era Japanese-American internment camp, in Granada, Colo. (Russell Contreras/AP)

The Amache site is less than one square mile, Bennett's office and the Prowers County Assessor said. It contains remnants of barracks, latrines, mess halls, military police structures and a cemetery.

Lee has been one of the Republican Party's most vocal opponents of the expansive power that federal agencies have to manage public lands in Western states.

He supported the Trump administration's 2017 decision to shrink the size of Bears Ears and Grand Staircase-Escalante, two national monuments in Utah. And last year, he opposed the Biden administration's decision to restore Bears Ears' original borders. In a 2018 speech in Utah, where about two-thirds of land is managed by federal agencies, he said his long-term goal to transfer federal lands to state control.

Camp Amache is owned by the town of Granada and already listed on the National Register of Historic Places. Its current designation qualifies it for preservation funds, but designating it as a National Historic Site would make available additional federal funds through the National Park Service.

Calling the Japanese American internment one of "the most disgraceful chapters in our nation's history" fed by "racist fear," Bennet said in a floor speech Feb. 3 the bill intended to honor people "who never gave up on the United States of American even as it was interning them on their own soil."

Japanese Americans were held in 10 camps in California, Arizona, Wyoming, Utah, Arkansas and Colorado, expelled from their homes near the West Coast under an executive order by President Franklin Roosevelt issued on Feb. 19, 1942. More than 7,000 people were interned at Amache — the camp's unofficial name, after a Cheyenne chief's daughter — between 1942 and 1945.

According to the National Park Service, a cemetery, reservoir, water well and tank and trees planted by internees remain at the site, which is managed by a non-profit, the Amache Preservation Society.

Lee's stance has drawn outrage from numerous organizations, including the Japanese American Citizens League and the National Parks Conservation Association, which advocates for the National Park System. The citizens league, its local Southern Colorado affiliate and other groups plan a Day of Remembrance on Feb. 19 that will, in part, demand passage of Bennet's bill.

The initiative "not only serves as a healing tool and an acknowledgement of wrongdoing by our government, but it allows individuals and out country to move forward to a better way of being," said Shirley Ann Higuchi, chair of the Heart Mountain Wyoming Foundation whose parents were interned at the Heart Mountain Relocation Center in that state.

She noted that her own father, William Higuchi, went on to become chair of the Department of Pharmaceutical Chemistry at the University of Utah; another detainee, Raymond Uno, became Utah's first ethnic minority judge.

"A lot of Japanese Americans contributed so much to Utah, and it's a shame that in some quiet way they cannot be honored," Higuchi said. "They have quietly contributed to our country and it's unfortunate they can't be supported by someone from their own state."

Both Bennet and Lee's offices said the senators have spoken about how to add the remnants of the Amache-Granada War Relocation Center to the parks system.