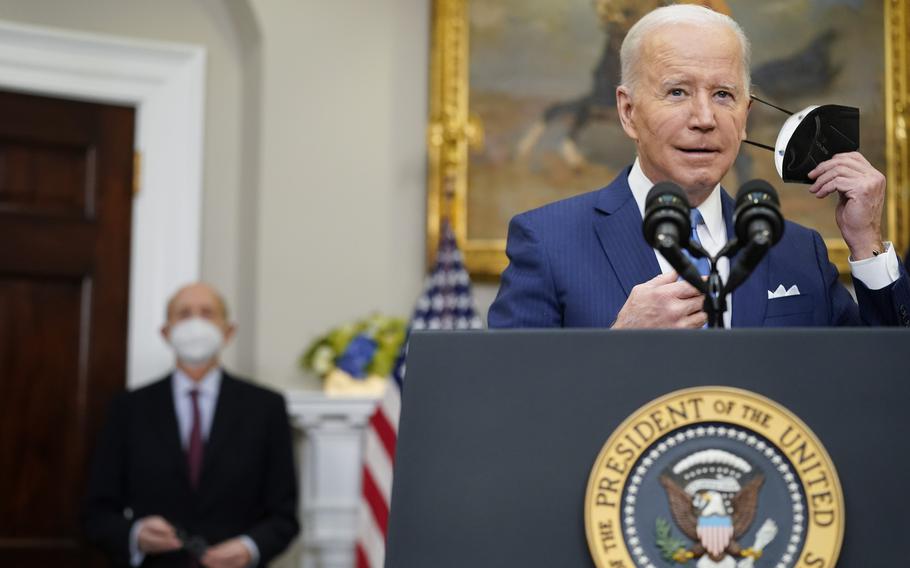 President Joe Biden removes his face mask as he prepares to deliver remarks on the retirement of Supreme Court Associate Justice Stephen Breyer, left, in the Roosevelt Room of the White House in Washington, Thursday, Jan. 27, 2022. (Andrew Harnik/AP)

WASHINGTON - Federal employees and military service members would receive average raises of 4.6 percent next January under the budget President Joe Biden will propose in March, marking what would be the workforce’s largest salary hike in two decades, according to senior officials at two federal agencies.

The pay increase would follow an average 2.7 percent raise that took effect last month for 2.1 million executive branch workers, as Biden proposed early last year. The increase took effect by default under a federal pay law after Congress took no position on the increase by the end of December.

The salary boost Biden will propose for 2023 will be part of a wide-ranging budget the administration is expected to release in early March for the fiscal year that starts Oct. 1. Raises are paid in January.

The Office of Management and Budget declined to comment. The senior officials spoke on the condition of anonymity because they were not authorized to discuss the budget proposal publicly.

The salary proposal, first reported by Federal News Network, received an early endorsement from congressional Democrats and federal employee unions. It represents the second year that Biden has relied on guidance from a federal pay law that calls for tying raises to a Labor Department index of private-sector wage growth called the Employment Cost Index, in this case growth from October 2020 through September 2021.

The formula sometimes has been followed, and sometimes not, in White House budget plans under both parties. President Donald Trump twice proposed freezing salary rates and in two other years came in under the recommendation of the pay index, although federal employees ultimately received raises each year during his term, ranging from an across-the-board 1 percent to 3.1 percent.

Biden’s approach underscores his administration’s close partnership with unions, whose collective bargaining power in the federal government is limited to working conditions, not wages, which are set by Congress. Biden established a contrast with the Trump administration early in his presidency with executive orders and rhetoric that shifted course from what was widely viewed as hostility toward civil servants by Trump.

Federal employee unions have enjoyed renewed clout in the current administration, for example, by largely setting the direction at some agencies for when their members will return to the office from remote work during the pandemic, in some cases pushing return dates well into the spring. Permanent telework is also expected to be a fixture of post-pandemic work life for some federal employees.

This week, a White House task force led by Vice President Harris and Labor Secretary Marty Walsh made dozens of recommendations to federal agencies to embrace union organizing and membership, both inside and outside the government.

The report said the government has a crucial role to play as a “model employer” that can improve access to organized labor, with the goal of inspiring better pay and workplace protections for the private sector. Agencies were urged to disclose in job announcements whether the position would have union representation and tell new hires about their organized labor rights.

Democrats already have unveiled legislation in the House and Senate seeking an average 5.1 percent raise for federal employees next year. The bill is sponsored by Rep. Gerald E. Connolly, D-Va., and Sen. Brian Schatz, D-Hawaii.

“In Joe Biden, we finally have a president who values the federal workforce and recognizes federal employees as the dedicated public servants they are,” Connolly, whose Northern Virginia district has tens of thousands of federal workers, said in a statement. “I look forward to working with his administration to provide a much-deserved pay increase, in line with my FAIR Act, for federal employees who have worked selflessly on the frontlines of this pandemic in service to the American people.”

Tony Reardon, president of the National Treasury Employees Union, which represents about 150,000 federal employees, said of Biden’s forthcoming proposal, “We . . . fully expect it will be a much more generous proposal than those of his immediate predecessor.”

“Given the complex problems that the federal workforce is tackling, from lifesaving research to national security, it is time to increase federal salaries so agencies can compete to attract and keep skilled employees to meet those challenges head on,” Reardon said.

Federal raises are expressed in terms of averages because they typically are divided into two parts: one paid across the board and the other a “locality” component that differs among about four dozen city areas, with a catchall rate for other locations.

The average 2.7 percent increase paid in January, for example, ranged from 2.42 to 3.21 percent, with employees working in the Washington-Baltimore area receiving 3.02 percent.

A 4.6 percent raise probably would be similarly divided, although details would come later in the year.

Federal employee raises do not affect cost-of-living adjustments for federal retirees. Those increases are linked to an inflation measure that boosted retiree annuities last month by 5.9 or 4.9 percent, depending on which of the two federal retirement systems applied to them.

The 2023 retiree adjustment will be determined in October, based on inflation over the prior 12 months.