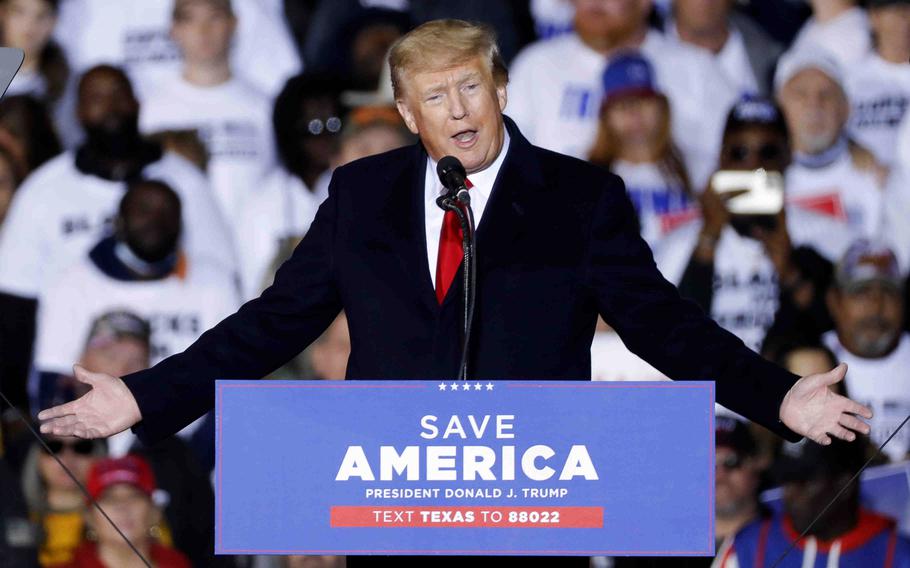 WASHINGTON - The National Archives and Records Administration has asked the Justice Department to examine Donald Trump’s handling of White House records, sparking discussions among federal law enforcement officials about whether they should investigate the former president for a possible crime, according to two people familiar with the matter.

The referral from the National Archives came amid recent revelations that officials recovered 15 boxes of materials from the former president’s Mar-a-Lago residence that weren’t handed back in to the government as they should have been, and that Trump had turned over other White House records that had been torn up. Archives officials suspected Trump had possibly violated laws concerning the handling of government documents - including those that might be considered classified - and reached out to the Justice Department, the people familiar with the matter said.

The people spoke on the condition of anonymity to discuss a politically sensitive request. The two people said the discussions about the matter remained preliminary, and it was not yet clear whether the Justice Department would investigate. The department also might be interested in merely reclaiming classified materials. A Justice Department spokesman declined to comment.

Trump’s years-long defiance of the Presidential Records Act, which requires the preservation of memos, letters, notes, emails, faxes and other written communications related to a president’s official duties, has long raised concerns among historians and legal observers. His penchant for ripping up official documents was first reported by Politico in 2018, but it has drawn new scrutiny in recent weeks because of the House select committee’s investigation into the Jan. 6 attack on the U.S. Capitol.

The Washington Post reported late last month that some of the White House records the Archives turned over to the committee appeared to have been torn apart and then taped back together. The Post later found - and the Archives confirmed - that officials had recovered 15 boxes of presidential records from Mar-a-Lago.

Among the materials they recovered included correspondence with North Korean leader Kim Jong Un, which Trump once described as “love letters,” as well as a letter left for Trump by President Barack Obama, people familiar with the matter said. The Archives also retrieved a doctored map of Hurricane Dorian that had been altered with a black Sharpie by Trump in a failed attempt to show he hadn’t been wrong about the storm’s path, according to a person familiar with the contents of the boxes. The Archives in a statement earlier this week said that Trump representatives are “continuing to search” for additional records.

In a statement Wednesday, Trump said he had engaged in “collaborative and respectful” discussions with the Archives and had arranged for the “transport of boxes that contained Presidential Records in compliance with the Presidential Records Act.” He said the media had falsely characterized his relationship with NARA as hostile and that it was a “great honor” to work with the agency.

“Much of this material will someday be displayed in the Donald J. Trump Presidential Library for the public to view my Administration’s incredible accomplishments for the American People,” he said.

The chairman of the Senate Homeland Security and Governmental Affairs Committee, which has jurisdiction over the Archives, said this week that reports about torn and missing White House documents provided “a shocking example of long-standing loopholes that exist in our current federal records laws.”

Sen. Gary Peters, D-Mich., said in a statement that “Congress must take action . . . to ensure that every administration is appropriately handling and preserving important records related to the President’s official duties.” Peters is working on legislation to strengthen records laws and plans to hold hearings on the topic in coming months, a Peters staffer said.

Actually substantiating a criminal case against Trump - and, perhaps, even launching a criminal investigation - could be difficult.

Legal experts and analysts have noted that the Archives lacks a real enforcement mechanism, and all recent administrations have had some violations of federal records laws - most often involving the use of unofficial email and telephone accounts.

Federal law makes it a crime to destroy government records, but it requires that a person know specifically they are breaking the law when they do so. That could be difficult to do for Trump, who advisers say tore up documents out of habit, leaving staff to retrieve and reassemble piles of torn paper. According to people familiar with the matter, Trump had been counseled by at least two chiefs of staff and the White House counsel to follow the law on preserving documents.

Last January, in the waning days of the Trump presidency, some administration staff also raised flags that some of the gifts Trump had received as president still remained in the White House, rather than properly turned over to the National Archives, said one former staffer familiar with the warning, speaking anonymously to share details of a potentially problematic practice. In the final days of the Trump administration, the packing was rushed and aides were concerned that personal items were being mixed with official items, according to former administration officials.

“There was quite a bit of concern about the amount of mixing of personal effects with gifts that had been received during his time in office, which I’m sure in a traditional White House would have immediately been processed and given to the Archives,” one former staffer said. “But in the Trump White House, it was scattered throughout the West Wing, displayed behind glass, in the private dining room, and in the private residence on the second floor.”

The concern now is that many of those gifts and other government documents improperly made their way to Trump’s private Mar-a-Lago Club in Palm Beach, Fla. This former staffer said, for instance, that after leaving the White House, Trump displayed a mini replica of one of the black border wall slats - with an engraved plaque on top - on his desk in his private office at Mar-a-Lago. Previously, as president, Trump had kept the replica on the credenza in the private dining room just off the Oval Office, next to some challenge coins he had been given.

During Trump’s 2016 campaign, as well as his presidency, building a wall at the nation’s southern border became rallying cry for Trump and his supporters, with the former-president becoming deeply involved with the minutia of the wall’s design; Trump specifically wanted the wall to be a steel bollard fence painted in “flat black” - a dark color known to absorb heat that would make the wall too hot for climbers to scale - and with sharp spikes on top, to appear more intimidating to would-be climbers.

Trump also took with him a model of the Air Force One redesign he had proposed - replacing the Boeing 747’s iconic baby blue with a dark blue belly and a similarly dark red stripe - when he left the White House. As president, Trump proudly displayed the model redesign of Air Force One on a table in the Oval Office; now, it sits in a similar place of honor at his private Florida club, atop a coffee table at the entrance to Mar-a-Lago’s opulent gold-plated lobby room that guest pass through to get to the patio.

It also could be a legal problem if significant amounts of classified material were in the materials at Mar-a-Lago, though it is hardly unheard of for former government officials to have such material outside appropriate government storage channels. It was not immediately clear whether classified documents were among those at Mar-a-Lago.

As president, Trump would have had virtually unlimited ability to disseminate classified materials, and prosecuting him even as a former official would face significant challenges. To substantiate a criminal case, prosecutors would have to prove that - once out of office - he intentionally mishandled the material or was grossly negligent in doing so.

Hillary Clinton, Trump’s opponent in 2016, was famously investigated by the FBI for possibly mishandling classified information in connection with her use of a private email server while she was secretary of state. That investigation began after a referral from the intelligence community inspector general.

Investigators found 110 emails that contained classified information at the time they were sent or received in the group of 30,000 that Clinton later turned over for review. But the Justice Department ultimately did not bring criminal charges, after the FBI decided that Clinton did not act with the intent necessary to substantiate a case. On the campaign trail, Trump called for Clinton to be jailed over the matter.

Two Trump advisers said they were aware of no investigation, and that their conversations had been cordial with the archives. Alex Cannon, a longtime Trump lawyer, has been a point of contact for the archives, two people familiar with the matter said.

The Washington Post’s Tom Hamburger contributed to this report.