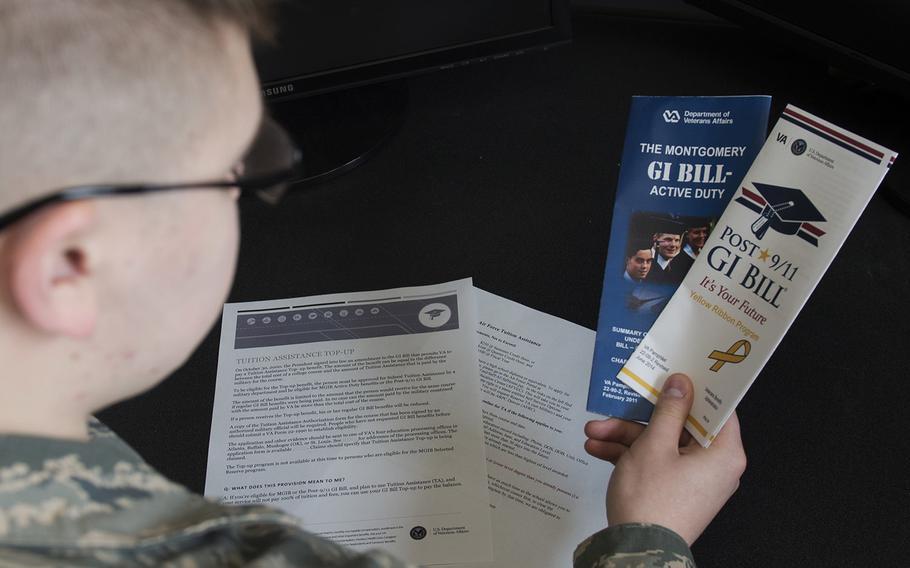 A bill was introduced in the Senate on Feb. 9, 2022, to simplify the forms used to transfer GI Bill benefits from a service member to his or her child or spouse. Confusion over the paperwork has led to errors and dependents being deemed ineligible for benefits, according to the office of Sen. Tommy Tuberville, R-Ala.  (Alyssa M. Akers/U.S. Air Force)

WASHINGTON — Legislation introduced Wednesday would simplify the paperwork required for service members to transfer their GI Bill eligibility to their dependents, which lawmakers believe will lead to fewer errors and more students able to access the benefits.

Service members can transfer their GI Bill benefits to their spouses or children if they have at least six years of service and commit to an additional four years. The process to transfer benefits includes filling out multiple forms with the Department of Veterans Affairs and Defense Department.

The forms require service members to fill out an “end date.” This field refers to the date when the benefit is no longer available, but it has been the source of confusion. There are multiple examples of service members misunderstanding the end date in question and making errors, which has barred eligible dependents from education benefits, Tuberville’s office said.

The issue has also been the cause for confusion in instances when a service member or veteran has died. In those cases, unused education benefits can be transferred to eligible dependents.

Bonnie Carroll, president of the Tragedy Assistance Program for Survivors, known as TAPS, said Wednesday that clarification was “much needed.” The bill would help ensure surviving spouses and children are not disqualified from benefits because of a technicality, she said.

Under the legislation, the Defense Department and VA would be ordered to modify the language used on their forms to clarify what information is required. The departments are not permitted now to amend the forms without an act of Congress.

A version of the bill was introduced in the House last month by Reps. Greg Murphy, R-N.C., Cindy Axne, D-Iowa, and David Trone, D-Md.