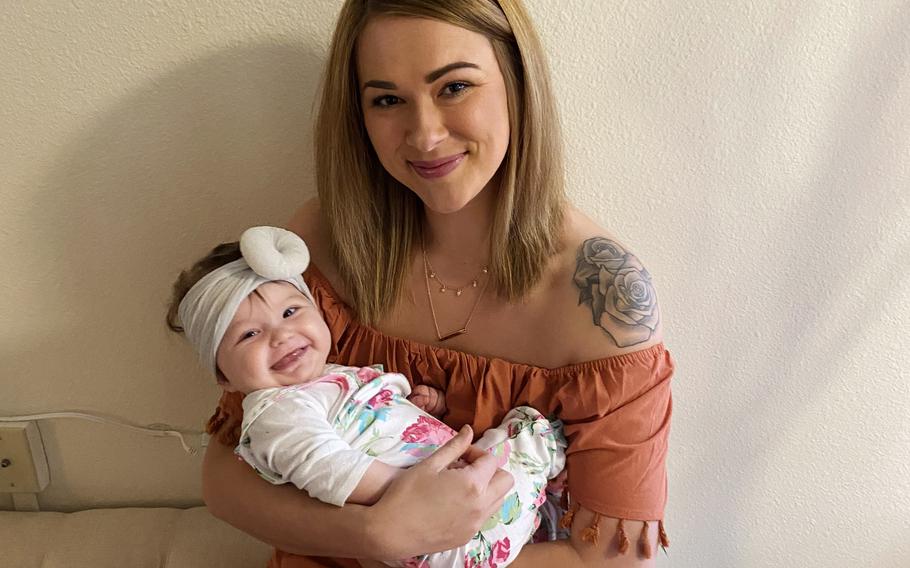 Katie Richard and her daughter, Scarlett Flores-Guerra, pose for a photo shortly before Scarlett’s death on April 18, 2020. (Courtesy of Billy Little)

NORFOLK, Va. - A Coast Guard petty officer was sentenced Tuesday to six years in prison for the death of her 5-month-old daughter at a small island outpost in Alaska, in a case that centered on the young mother’s mental health and postpartum depression.

Katie Richard, 25, was convicted of involuntary manslaughter last week after a trial lasting nearly a month at a Coast Guard facility here. The eight-person jury determined there was insufficient evidence to substantiate first-degree murder charges or alleged obstruction of justice tied to the suspected deletion of phone records during the criminal investigation.

Richard intends to appeal her conviction, her attorneys said.

When she announced on social media that her daughter, Scarlett Flores-Guerra, was found dead in her crib at the family’s Kodiak, Alaska, home on April 18, 2020, Richard said the baby had died in her sleep, eliciting an outpouring of support from friends and colleagues, according to evidence gathered by the Coast Guard as part of its investigation. But two months later, Richard told investigators that she “might have” pushed her baby’s face into the crib’s mattress as she settled her to sleep, according to audio of her interview with investigators played in court.

Richard’s case was the first Coast Guard murder trial in more than a decade. With about 54,000 personnel, the Coast Guard is the military’s second-smallest branch of service after the newly established U.S. Space Force and prosecutes comparatively few criminal cases every year. (In 2021, only 28 courts-martial were convened, a spokeswoman said.) And while the larger services have courtroom facilities on-site at most major bases, the Coast Guard tries most cases at just two, one in Norfolk and the other in Alameda, Calif.

Coast Guard Lt. Cmdr. Allison Murray, who delivered the prosecution’s closing arguments Jan. 31, called attention to what she said was Richard’s troubling web search history, which was found to contain queries such as “What do I do if I feel like I want to hurt my baby?” and “What do I do if I hate being a mom?” according to evidence presented in court.

Richard, Murray said, was a detached and unhappy mother who let her husband, Coast Guard Petty Officer 2nd Class Gustavo Flores-Guerra, do most of the parenting. After the baby’s death, the prosecutor added, witnesses described Richard as showing little emotion and appearing to have moved on from tragedy quickly.

“It’s jarring,” Murray told the court, “to hear this indifference, this callousness.”

Navy Lt. Cmdr. Jennifer Luce, one of Richard’s attorneys, asked the jury to ignore Richard’s June 19, 2020, interview with the Coast Guard Investigative Service during which she told agents she had “freaked out” as her child cried on the day of her death and agreed she might have pushed the baby’s head down - an admission Richard would later recant.

Luce also emphasized there were unanswered questions about missing evidence, such as a cloth-and-plastic bib the baby had around her neck, which appears wet and covered with a dark substance in photographs presented in court, but was never recovered by investigators. That bib left marks on the baby’s face, Luce said, suggesting it may have caused an accidental death.

“A lot of people have postpartum depression. [Richard] got help. She got medication,” Luce told the Coast Guard members composing the jury. “The most disturbing thing is, [investigators] pushed the narrative onto her until they convinced her she killed her daughter.”

Richard, who did not testify during the trial, kept her eyes down for most of the closing arguments, drawing with a stylus on a computer tablet. She quietly wept when her attorney told the jury that Richard had grieved in private.

A Coast Guard administrative clerk, Richard and her husband - they have since divorced - arrived at Base Kodiak in June 2019. Located on an island 400 miles south of Anchorage, the remote post is staffed by about 600 personnel and used as a staging point for search-and-rescue missions and maritime patrols.

Richard and Flores-Guerra met in January 2019, and she became pregnant the following month, court documents show. Friends told investigators that the couple seemed happy together and that Scarlett, who was born in October 2019, seemed well-nurtured.

On the day of Scarlett’s death, Richard and Flores-Guerra were with friends, Coast Guard Seaman Daniel O’Leary and his wife, McKenna O’Leary. The men washed cars while the women watched television at the O’Learys’ home, eventually relocating to Richard’s house so the baby could go to sleep.

About three hours after putting Scarlett down for a nap, Richard returned to the nursery to feed her. Daniel O’Leary told investigators he heard screams coming from the house after Richard and Flores-Guerra found the child blue and unresponsive.

The Alaska State Medical Examiner Office determined the death was due to asphyxia, ruling out sudden infant death syndrome. The medical examiner’s report also drew attention to a small bruise on the back of the baby’s head and another under her chin. Prosecutors concluded that, during a 10-minute span when Richard was alone with her daughter in their home, she had tightly swaddled the screaming infant, then held her face into the mattress for up to 90 seconds, ending her life.

Richard’s defense team, led by attorney Billy Little Jr., did not commit to a single alternate theory about the death, but emphasized what they said were missing pieces in the prosecution’s case.

In addition to the missing bib, investigators never recovered the baby’s clothes, crib and mattress, according to courtroom testimony. A defense witness also said in court that officials initially were lax with how they treated the scene of child’s death, allowing Flores-Guerra to return to her room during the investigation to place a rose in the crib, which appears in investigators’ photographs.

Chris McDonough, a retired homicide detective who testified as an expert witness for the defense, said in an interview that he believed Coast Guard criminal investigators were out of their league in the case.

“They should have called in some folks, you know, [Naval Criminal Investigative Service], with more experience, or even the FBI,” he said.

The Coast Guard did not respond to questions about its handling of the investigation.

Despite the defense team’s assertions about missing physical evidence, prosecutors said they had enough information to ensure a conviction, pointing to the testimony of an expert witness, medical examiner J.C. Upshaw Downs, who dismissed the bib as a possible cause of death.