Biden’s rebranded conservation plan has critics on all sides 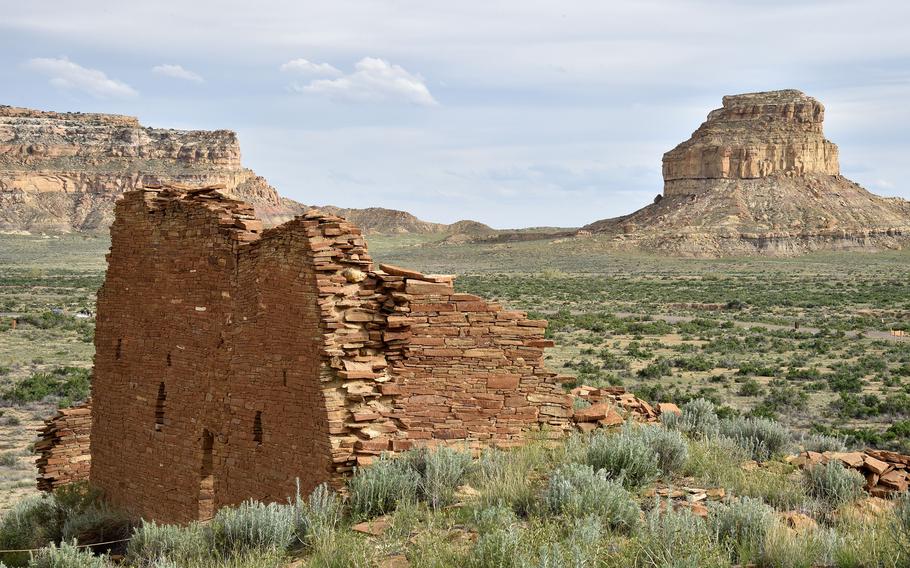 The ruins of a Una Vida house, built by ancient Puebloan people, is seen at Chaco Culture National Historical Park on May 20, 2015. (Mladen Antonov, AFP/Getty Images/TNS)

WASHINGTON (Tribune News Service) — The environmental community last year welcomed President Joe Biden setting a goal of conserving 30 percent of U.S. lands and waters by 2030, even as critics on the right denounced the initiative as a federal land grab.

Administration officials working to deliver on the president’s target now find themselves working to allay concerns among rural residents that they could face heavy-handed mandates — even as some environmental groups push for a more aggressive approach.

All sides agree that much hangs on how the administration defines which lands and waters count toward the “30×30” goal, which is intended to preserve natural areas, protect threatened wildlife species and help address climate change.

Opponents argue that under the strictest of possible definitions, reaching the 30×30 mark would require locking up vast swathes of land — hundreds of millions of acres.

The administration has described its efforts as kinder and gentler than all that, emphasizing the role of voluntary, grassroots actions and respect for private working lands.

They also have rebranded the effort from 30×30 to “America the Beautiful.”

That hasn’t exactly won over conservative politicians, who have been rallying their constituents to resist the proposal.

Nebraska’s Republican Gov. Pete Ricketts held a series of town halls last year criticizing what he continues to call 30×30. Ricketts told farmers to look out for unfamiliar clauses in their USDA contracts and urged county officials to consider rejecting conservation easements if they went too far in locking up land.

While the federal agencies in Washington can seem far away, Ricketts said, the battle lines are much closer to home.

“This fight is in our own backyards,” Ricketts told his constituents. “It’s right here in our state. We’re in the trenches right here.”

His barnstorming appears to have produced results — Ricketts said in a recent interview that 65 of the state’s 93 counties have passed resolutions opposing 30×30 and that he’s heard of at least two rejecting proposed conservation easements.

Counties in New Mexico, Colorado and other states have adopted similar resolutions.

In a recent progress report, the administration touted a slew of actions it already has taken. Those include approving grant funding for a range of conservation projects and actions to help underserved communities, such as reinstating a program to address outdoor recreational gaps in urban areas.

The Interior Department has taken steps to make it easier for Bureau of Indian Affairs regional directors to place land in trust and moved to extend protections for specific areas such as New Mexico’s Chaco Canyon and Utah’s Bears Ears National Monument and Grand Staircase-Escalante National Monument.

But some environmentalists have called for the administration to be more aggressive.

“Biden’s success will depend on the number of acres protected, not the number of committees established,” Spivak said in a statement after the December progress report’s release. “Biden’s actually taken a giant step backward by indicating intentions to reduce protections for the endangered Florida panther, which would pave the way for rampant habitat destruction. He must reverse course and significantly up his game if we’re to have any chance of reversing the extinction and climate crises and protecting life on Earth.”

Conservation has occasionally represented an area of bipartisan cooperation. Lawmakers from both sides of the aisle came together to support the Great American Outdoors Act during the final year of the Trump administration. That law provides nearly $1 billion a year to the Land and Water Conservation Fund, which is used in part for federal land acquisition.

But now Rep. Lauren Boebert, R-Colo., has introduced legislation that would nullify Biden’s executive order on 30×30 and take other steps, such as prohibiting federal land acquisition or national monument declarations in certain areas.

Ricketts said the difference between Biden’s and previous GOP-supported conservation measures is that the earlier proposals were handled transparently. He said the new administration has engaged in “happy talk” while refusing to define basic terms about what will count as “conserved” land under the plan.

Farmers and ranchers were the original conservationists, he said, noting that Nebraska land is heavily agricultural.

“You could say it all qualifies if you define it the right way, in which case then we’re not going to have a problem,” Ricketts said. “But if the federal government is trying to be more restrictive, ‘permanently protect in its natural state,’ well, that’s a very different definition.”

In an interview, Spivak pointed out that many see the 30 percent goal as a milestone on the way to conserving 50 percent of all lands and waters by 2050.

Spivak said the administration can’t settle for paying lip service to 30×30 and worried that its initial approach emphasizes access to the outdoors and nature.

Those are worthy goals but not the core rationale for 30×30, she said.

“Globally, scientists are raising the alarm that we are losing wildlife — plants, bugs, mammals, marine mammals, it’s across the board — at an alarming rate,” Spivak said. “Not only are they important for their own intrinsic value, nature, but it underpins our life support systems on this planet.”

Measures such as conservation easements and working with landowners can be helpful, but more is required, Spivak said.

Ricketts said that kind of language worries him regardless of how many times the administration says it values voluntary action and the rights of landowners.

“It’s being driven by those radical environmentalists, which is why I’m so concerned,” Ricketts said.

A fundamental question is what will be counted as “conserved” land.

The administration’s reports thus far highlight that working lands can play a role, but Spivak said there are still harmful practices, from heavy pesticide usage to clear cutting timber, that should disqualify land from being considered “conserved.”

Those questions are key as the administration gathers public comment on the American Conservation and Stewardship Atlas, intended to serve as a new tool for establishing a baseline of conserved lands and waters. The Interior Department held a trio of January listening sessions to get input on the atlas.

During one of those sessions, Hilary Cooper, a county commissioner in San Miguel County, Colo., said ranchers in her area are wary of federal conservation efforts.

In an interview, Cooper said several of her neighboring counties have passed anti-30×30 resolutions and she’s sensitive to how terminology is important.

She has worked on a “payment for ecosystem services program” that provides incentives for landowners who protect and improve water, soil and habitat conditions. The pitch to private landowners is that they are providing a critical public service, not accepting a government handout.

She said it’s about taking it one rancher at a time, helping a particular rancher adopt practices that can result in more grass, happier cows and more productivity, ultimately resulting in more high-value beef.

“And then his neighbor’s going to be like ‘Hey, whatcha got going on over there?’ and it’ll be a neighbor-to-neighbor kind of conversation,” Cooper said.