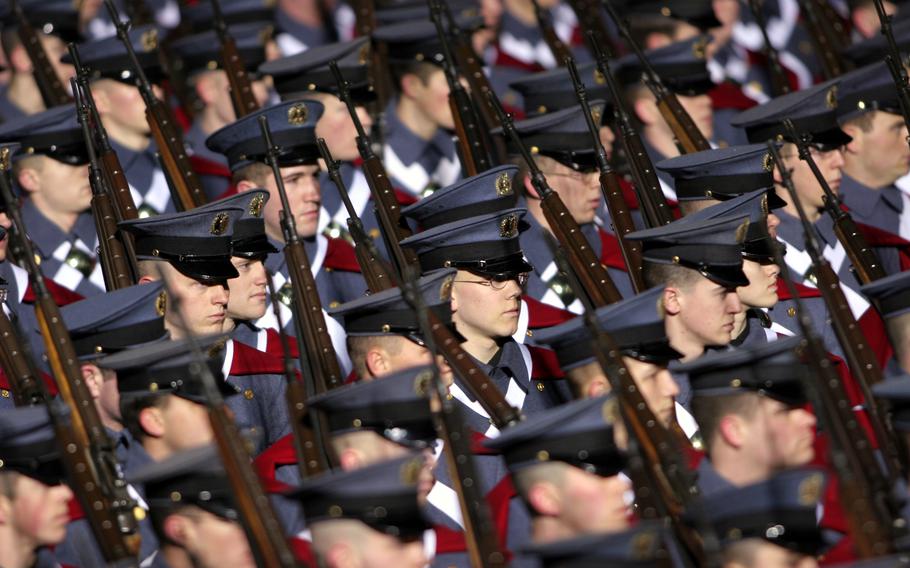 VMI cadets march in the parade for the 2005 inauguration of George W. Bush in Washington. (John McDonnell/The Washington Post)

Virginia Military Institute will make changes to its student-run honor court to make the system fairer to cadets accused of lying, cheating, stealing or other transgressions that can lead to expulsion.

VMI detailed the reforms in a progress report Friday in response to a state-ordered investigation into racism and sexism at the nation's oldest state-supported military college.

The 70-page report, which the college gave to General Assembly members and the Virginia secretary of education, describes initiatives approved, enacted or begun last year, including mandatory diversity, equity, and inclusion training for administrators and members of VMI's Board of Visitors, and changes to the Lexington school's one-strike-and-you're-out honor court system.

Black students at VMI were expelled by the honor court at a disproportionately high rate, according to data obtained by The Washington Post for the three academic years between the fall of 2017 and the spring of 2020. Though Black cadets made up about 6% of the student body, they represented about 43% of those expelled for honor code violations. Twelve out of the 28 VMI students dismissed in those three academic years were Black. When students of color were included in the count, the number of expelled rose to 15, or about 54% of the total, even though minorities made up about 21% of the student population in that three-year period.

Barnes & Thornburg, the law firm hired by the state to investigate racism and sexism at VMI, recommended in its final report that the college "consider changing" its policy of allowing convictions without unanimous verdicts by student juries.

But VMI, which received $21.6 million in state funding for the 2021-2022 academic year, reported Friday that it will keep allowing student prosecutors to win cases with non-unanimous verdicts. The school did make one major concession: The student juries will expand in size and guilty verdicts will require nine out of 11 jury votes instead of five of seven votes.

The move, the college said in its progress report, "increases the Court's burden of proof and further reduces the potential (real or perceived) of forcing a guilty verdict based on insufficient or circumstantial evidence."

Another key honor system change will allow cadets to use pro bono attorneys during their trials. VMI used to allow lawyers to represent cadets during the proceedings, but stopped about a decade ago because of complaints that the professional litigators prosecuted the system itself and that only affluent students could afford them.

Now, VMI will draw up a list of pro bono lawyers willing to work with cadet defendants and their "defense advocates" - typically VMI faculty or staff members - before and during trials. But the attorneys will be allowed only to observe and consult their client or their defense advocate during the hearing, not argue the case themselves.

The college also said it will begin retaining "key demographic data" to "monitor the fairness of the system." VMI's chief diversity officer, Jamica Love, the report said, will help "facilitate annual reviews" of the honor system.

All of the new honor court changes will go into effect in August 2022, at the beginning of the next academic year.

Though there has been intense resistance from some alumni, students and parents to VMI's cultural makeover, the progress report chronicled the college's efforts to "temper" its links to the Confederacy.

The 182-year-old school sent many of its cadet to fight for the South during the Civil War. More than 250 cadets fought at the Battle of New Market in May 1864, and 10 were killed in battle or died later from wounds. Confederate Gen. Stonewall Jackson taught physics at VMI before the Civil War.

The reported noted the school's decisions to remove many of the tributes to Jackson, including his 108-year-old statue that stood at the campus's center, plus his name that was emblazoned on the student barracks.

But VMI is still deciding whether to preserve many more Confederate tributes, including an award and another monument partially named after and honoring Jackson, and a bronze statue of its first superintendent, Francis H. Smith, who enslaved nine people and served as the commander at abolitionist John Brown's execution in December 1859.

The progress report noted that VMI's new commandant, retired Col. Adrian Bogart III, has instituted an "open-door" policy on Fridays that the school hopes will encourage students of color "to discuss participation in any activity that has the potential to stir cultural or other demographic sensitivities."

The school also detailed numerous trainings for cadets meant to crack down on racist jokes, slurs, misogyny and sexual violence.

According to a survey the college conducted on the sessions, three-quarters of the freshmen were "mostly or completely satisfied" with the program; 88% found that it helped "connect them with their peers"; and 94% said the activities "helped initiate dialogue about inclusivity."

Much of the racism and sexism at VMI is also found online, especially via the social media app Jodel, where cadets anonymously denigrate one other day-in, day-out. The report said the school's communications and marketing team monitors Jodel's traffic and said that "there has been a noticeable decrease" in inflammatory posts on the app and an uptick in "corrective or regulating" posts when provocative comments surface.

"Both the Superintendent and the Commandant have clearly and publicly - on numerous occasions and in various venues - expressed to the Corps of Cadets and the greater VMI community what is and is not acceptable behavior," the report said. "These incontrovertible statements by VMI leadership establish straightforward expectations for moving VMI forward to a more diverse and inclusive environment that is also a physically and emotionally safe place of higher learning."

VMI completed the progress report at the behest of Barnes & Thornburg. In its final investigative report, released in June, the law firm the said that school suffered from an "overall racist and sexist culture."

Barnes & Thornburg said the college should issue these reports every quarter for three years to its Board of Visitors, the General Assembly and the State Council of Higher Education for Virginia, an agency that makes higher education policy proposals to the commonwealth's lawmakers.

"VMI will likely follow through on its promised reforms only if it is forced to do so," the Barnes & Thornburg report said. "For the betterment of the school, VMI must be held accountable to its promises and plans to change the current culture."