A new attitude toward the pandemic seems to be taking shape, but we’ve been here before 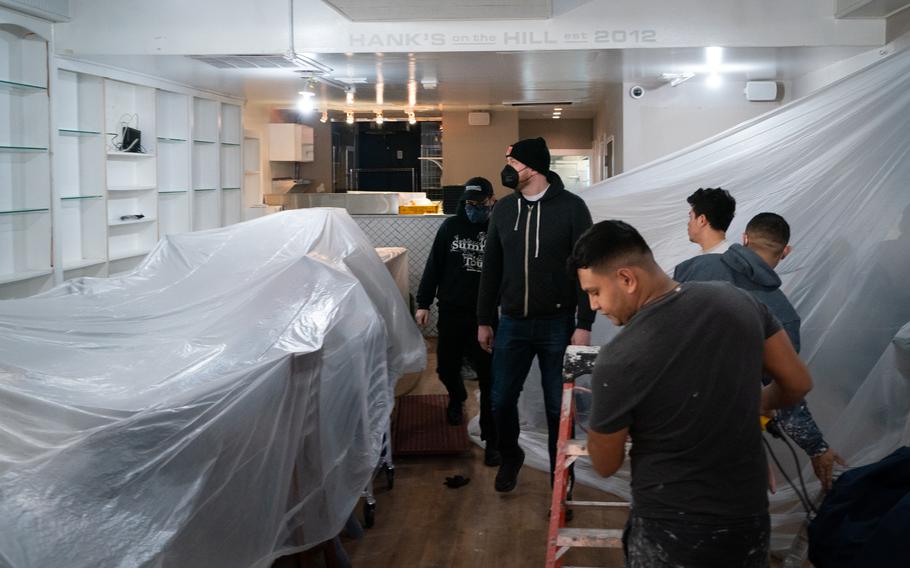 Andrew Markert respects the coronavirus. It has messed with his livelihood, a D.C. pub called Beuchert's Saloon, forcing him to close, move outdoors and adjust in countless other ways.

But the time has arrived for him to move forward and stick to his plans, come what may in the next round of the pandemic. And he's betting there are a lot of people like him.

So Markert plans to open not one, but two new restaurants in the next couple of months — Fight Club, a few doors down from Beuchert's, in February and the upscale Newland around the corner in April.

"I'm cautiously optimistic that we're at the end of it," he said as workers scraped and primed Fight Club's interior last week. "I'm mentally over it, but physically still cautious."

Fatigued, frustrated and frazzled by five surges over two years, some parts of the U.S. population have decided to simply live with the coronavirus and move on. And with a triple-shot of vaccine on board — or protection acquired from prior infection - alongside case numbers falling precipitously, polls show their numbers are increasing.

The Atlantic last month declared some of them the "Vaxxed and done," and Time magazine this week is exploring "How Covid Ends," its cover a hopeful portrait of the spiky red virus fading to black.

Some municipalities and schools are shedding mask requirements. Elected officials no longer even talk about conquering the virus, as President Biden did just seven months ago, in the short-lived glow of the vaccine rollout. A bipartisan group of governors told Biden last week at the White House it is time to "move away from the pandemic," in the words of Arkansas Republican Gov. Asa Hutchinson. 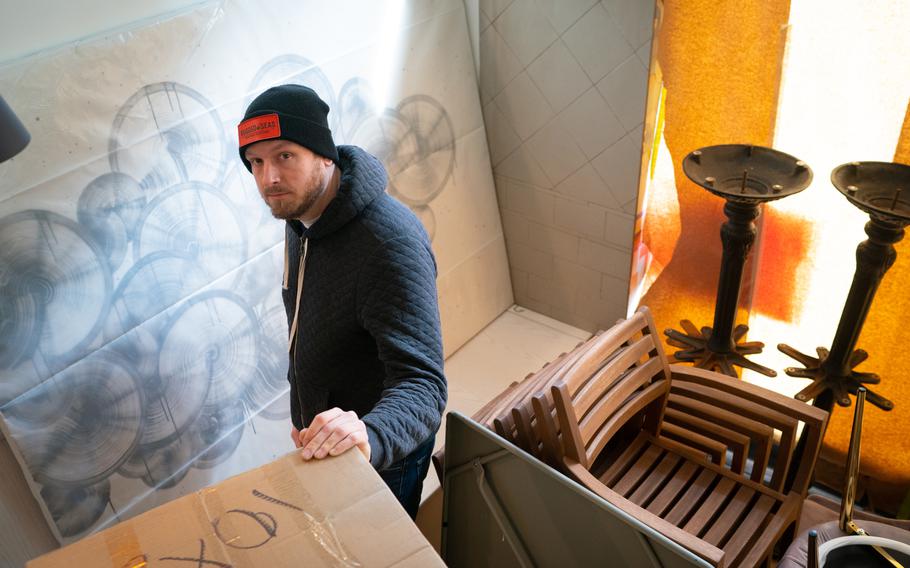 Andrew Markert, 39, is pictured in Newland, a soon to be opened restaurant in D.C. that is named after the street that he grew up on in Baltimore. (Sarah L. Voisin/The Washington Post)

In Seattle, Joe Inglish, 30, isn't throwing all caution to the wind. He said he's still avoiding indoor dining and limiting unmasked, indoor gatherings with friends. But as soon as he was vaccinated in March, Inglish was ready to return to attending the concerts he had missed since the pandemic began.

Inglish attended 27 shows in 2019 and none in 2020, a major lifestyle shift. He knows that returning could expose him to covid-19. But with a KN95 mask, he said he feels relatively protected, and he's no longer willing to give up something so important to him.

"Given all the other precautions I've taken," he said, "I'm allowing myself this one minor risk."

In a January Monmouth poll, 28% of Americans said the country would "never" get the outbreak under control and return to normal — up from 9% in March 2021.

An Axios/Ipsos poll taken about the same time found that 61% believe the vaccine allowed them to return to something like their pre-covid routine. And a KFF poll found that 77% of Americans believe most people will inevitably develop covid-19 anyway, a sentiment that crosses party lines.

Polling during the pandemic is volatile; as Ariel Edwards-Levy, a polling and elections analytics editor at CNN has pointed out, since it tends to reflect the state of the pandemic at the moment. But experts said we should not be surprised if these sentiments are growing.

Most people are averse to uncertainty, said Maurice Schweitzer, a behavioral scientist and professor at the Wharton School of the University of Pennsylvania, and the past two years have seen nothing else. Many people are beyond exhausted.

"We'd like to be done," Schweitzer said. "The problem is, it's a virus. It's not getting tired."

People realize that "if I keep waiting for the right time, it would be a long wait," Schweitzer said. "If you're starting a business or starting a family . . . you might think, 'Well let's do it now, let's move forward.'" Others arrived at this point long ago.

Of course, we've been here before. Several times.

"Today, while the virus hasn't been vanquished, we know this: It no longer controls our lives. It no longer paralyzes our nation. And it's within our power to make sure it never does again," Biden said on July 4.

"It's going to disappear. One day — it's like a miracle — it will disappear," President Donald Trump said on Feb. 27, 2020. "And from our shores, we — you know, it could get worse before it gets better. It could maybe go away. We'll see what happens. Nobody really knows."

Today we do know: Predictions of the virus's demise have been wrong every time. Most experts have given up trying. We are just one variant away from going through it all over again.

Even as case numbers are plummeting, they are still at staggering, record levels for the entire pandemic - a seven-day average of over 300,000 on Sunday, according to data tracked by The Washington Post. The daily death toll has surpassed the total in every other wave but last winter's. The U.S. death total has reached 900,000.

Only 64% of the U.S. population is fully vaccinated, and the proportion that has received booster shots lags well behind that. Children under 5 are not yet able to be vaccinated at all, though the shots could be available by the end of the month.

The same polls that show people exhausted by the pandemic also reveal that many are more worried about infection during the omicron surge than they were during some previous waves.

Kim Hauriel of Naples, Fla., is flummoxed by those who argue it's time to get back to normal. Two years into the pandemic, the 51-year-old, her husband and children remain extremely cautious about covid, even after being vaccinated.

They have not gone out to eat, considering even outdoor dining to carry too great a risk. They avoid gatherings of all sizes. And they always wear masks — N95s for Hauriel and her husband and KF94s for the kids.

"It's not that difficult to lift your pinkie finger and just put on a mask, be a little safer, avoid unnecessary gatherings or have them more safely outdoors, still masked," she said. "It's difficult to relate. I'm not giving up."

Hauriel said she worries about the risk of long covid and the chance of spreading the virus to the vulnerable. And she doesn't want to take up a hospital bed "just for being careless."

Once people move on, it will be even more difficult to reverse course if another surge occurs. When Colorado Democrat Gov. Jared Polis said in December that "the emergency is over," because of the widespread availability of vaccines, Colorado Medical Society President Mark Johnson pushed back.

"I think the governor speaks for probably 70% of people who say, 'I'm through with this.'" But hospitals are still seeing an overwhelming number of patients, and although most made the choice not to get vaccinated, health-care workers "don't have that luxury of saying, 'It's your own fault; let's move on," he said Thursday.

People respond differently to the stress of the pandemic, said Todd Farchione, a clinical psychologist and associate professor at Boston University. Some may feel comforted by restrictions and mandates and others may be feeling "done" with the pandemic, he said.

"Then there's everything in between," he said. In any risk assessment, a person may consider, "'what are the real risks here relative to what's important to me in my life, and what I need in terms of caring for and being there for friends and family, being part of life?"

Markert's step forward came by chance, when two spaces for new restaurants opened unexpectedly last year just a few steps from Beuchert's. He wasn't looking to expand in the middle of an unpredictable pandemic. But he also didn't want to let the prolonged upheaval stand in his way.

"What it comes down to is opportunity," he said. "The opportunity was there and it's not every day you get a chance to open a restaurant four doors or five doors down from your current restaurant. . . . And obviously when we started going down this path, omicron wasn't even a thing. Cases were dropping. Delta variant wasn't that prominent in the area."

"Just sort of exhausted by it," added Bart Hutchins, chef and co-owner of Fight Club, "and hoping that we're at the tail end of it."

Kevin Volpp, director of the Center for Health Incentives and Behavioral Economics at the University of Pennsylvania, noted that before the omicron wave, some workplaces were encouraging employees to return to pre-pandemic in-office work schedules.

Unless a new variant arrives, current conditions are "leading to an opening up again in a way that I think will probably continue to evolve steadily in the coming weeks," he said. "I feel like people collectively have been carrying around this huge burden of worrying about covid, and it affects their lives, their performance in lots of ways. People are really worn out by that."

The Washington Post’s Emily Guskin contributed to this report.