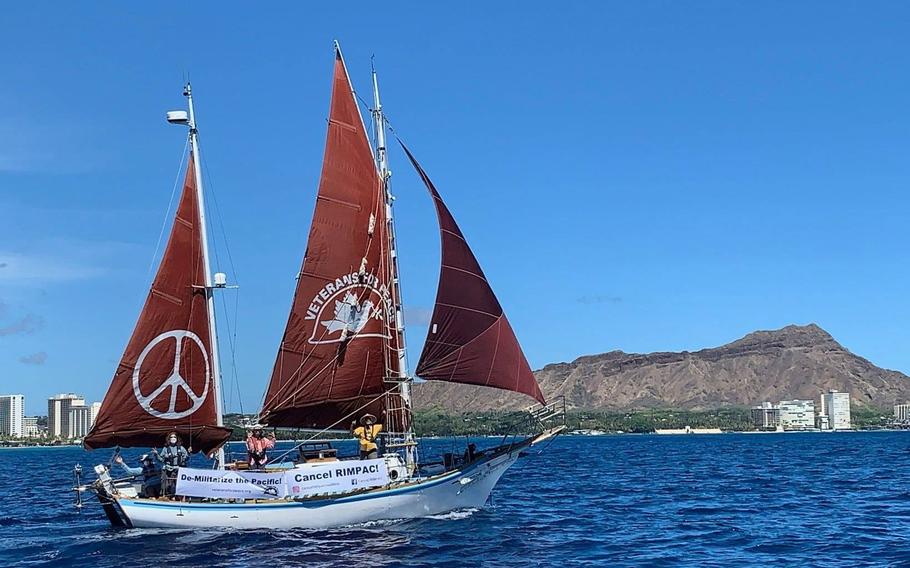 Then there’s the tiny, but mighty, Golden Rule peace boat.

Unlike its more visible protest cohorts, the Golden Rule is a 34-foot wooden ketch that embarked on its first anti-nuclear arms protest in 1958.

The boat was turned away, and its crew of four Quaker peace advocates was arrested when they attempted to sail from Hawaii to the Marshall Islands to dispute nuclear bomb testing there.

On Friday afternoon, the Golden Rule sailed purposefully into San Diego Bay in observance of the one-year anniversary of the U.N. Treaty on the Prohibition of Nuclear Weapons. The treaty took effect Jan. 22, 2021.

The boat, recognizable by a giant white peace symbol and Veterans for Peace logo on its red sails, arrived here after a stop in Oceanside. It will remain until Feb. 16 to wage an educational campaign that includes online speeches by peace advocates, activists and human rights supporters.

Its crew is offering boat tours and harbor cruises from its berth at the Harbor Police dock on Shelter Island, with details on its website. Its next stop is Ensenada.

“I’ve only been involved since I heard about it last December,” says La Mesa crew member Ron Evans, 69, a semi-retired San Diego State University professor who identifies with the mission.

He trained last month at the Golden Rule’s home port in Humboldt Bay. “The main people involved are veterans of the military who are standing up for peace and nuclear disarmament — that says something to me.”

The Golden Rule made an international splash in 1958 when its skipper, Albert Bigelow, a former U.S. Navy lieutenant commander, was blocked by the Coast Guard from sailing into the Pacific Ocean nuclear test zone as a protest.

After its initial activism, the Golden Rule retired under a series of private owners and ended up in Northern California’s Humboldt Bay. It sank at dockside during a gale in 2010 and was about to be scrapped when the boatyard owner who salvaged it learned of its history.

He gave it to a local chapter of Veterans for Peace, whose members offered to rebuild it. After five years of restoration, a new era of ocean-born political activism was launched in 2015.

That’s when Helen Jaccard, who now manages the Golden Rule Project, entered the scene. She wasn’t a sailor or a veteran, but she strongly embraces the peace movement and is a member of Veterans for Peace. Her longtime partner, Gerry Condon, a Vietnam-era veteran and war resister, is a past Veterans for Peace national president.

They moved their RV into the boatyard to put finishing touches on the restoration. Jaccard, a database manager by training, was tasked with creating crew job applications. She filled out an application to test the digital system, and that’s how she ended up on the crew, she laughs.

The maiden voyage of the restored boat was to San Diego in 2015 for an international convention marking the 70th anniversary of the nuclear attacks on Hiroshima and Nagasaki.

In the past seven years, the Golden Rule has traveled up and down the west coast of North America and around Hawaii. In March 2020, it was preparing to leave Hawaii to visit the Marshall Islands and Japan when the pandemic emerged.

The organizers changed course — putting signs on the boat, scheduling picture ops, virtual meetings and speeches in outdoor areas to observe socially distancing. “We learned how to be effective even during a pandemic,” Jaccard says.

She manages much of the daily operations, while Condon is president of the Golden Rule Project.

Hundreds of volunteers and dozens of captains have crewed for the ship.

Currently on the roster with Evans are Ren Jacob, of Oregon; Bob Betts, of Idaho, and Bruce Gustafson, of San Diego. Capt. Chris Appleton was snowed in at his Buffalo, N.Y., home this week, so local skipper Ron Kohl is subbing for him.

Big plans are in its future, which include sailing down the Mississippi River, patrolling the eastern seaboard from Florida to Maine, traveling along the Erie Canal and plying the Great Lakes.

The little boat averages about 5 mph as it parades its three-pronged message: peace, disarmament and sustainability. The Golden Rule has been relatively problem free since its 2015 re-launch. Other than running aground on the Sacramento Delta twice, the biggest setbacks have been a broken tiller, a lost anchor and a damaged rudder

“I think we are accomplishing our mission,” Jaccard says. “We’ve had tens of thousands of eyes on our boat, and thousands of people have heard our presentations. We go to Rotary Clubs, schools and churches.”

The ocean-going activists “pass the hat” at in-person events and receive enough donations to maintain the project’s $60,000-to-$80,000 yearly budget.

“People are friendly. They like to hear our story, hang out with us, trade information,” Jaccard says. “Even in the military town of San Diego, they support us.”

Jaccard, 66, explains that she has been “against nuclear everything” since high school, when she studied subatomic particles and realized the danger posed.

She came aboard after being inspired by Bigelow’s book outlining his struggles to cross the ocean to stop the nuclear bomb tests.

“When I found out they were considering me as a crew member for a boat with this incredible history, I was in tears.”