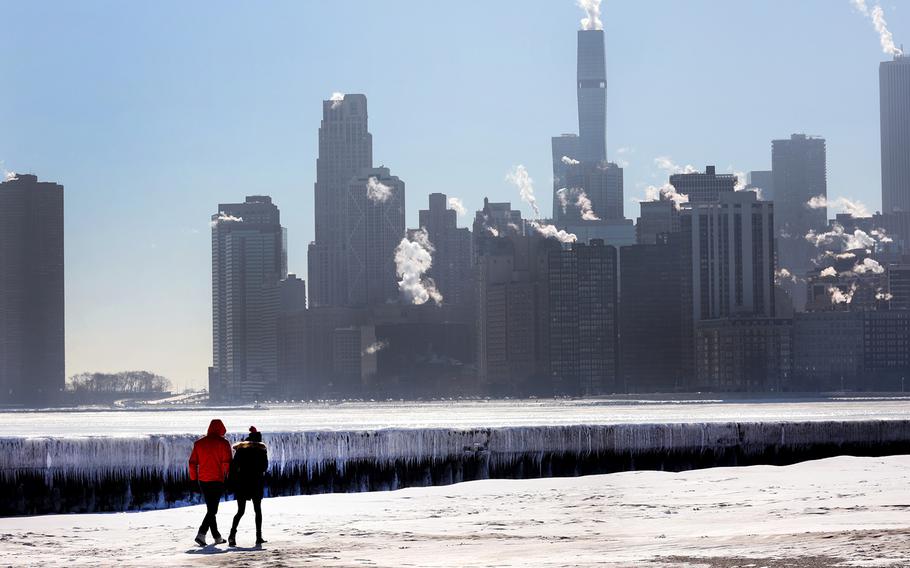 A couple walks along North Avenue Beach on the shore of Lake Michigan as temperatures hang in the single digits on January 26, 2022, in Chicago, Illinois. The coldest temperatures in more than a year have gripped the city but a slight warmup is expected to begin tomorrow. (Scott Olson/ Getty Images)

(Tribune News Service) — Most of the Great Lakes will remain above their long-term average water levels in the coming months but won't reach the record highs of recent years, Army Corps of Engineers hydrologists said in their latest forecast.

"We're well below the record high levels we experienced in 2019 and 2020," Detroit District Great Lakes Watershed Hydrology Chief Keith Kompoltowicz said. "And our forecast does not show the likelihood of any of the lakes really approaching those record highs again over the next six months."

The Detroit District released its latest monthly lake level bulletin Friday. Hydrologists reviewed January lake levels and weather patterns and projected a range of possible water levels for each lake over the next six months.

All of the Great Lakes declined somewhat in January, hydrologists found. The region experienced less precipitation than usual that month.

Drier than average weather, particularly in 2021, has caused lake levels to decline from their record highs, Kompoltowicz said.

The area around Lake Superior has been particularly dry, pushing the northerly lake below its average water levels. It likely will remain below average in the next six months, hydrologists found.

"We've see very dry and even extremely dry over the Lake Superior basin, while the other lakes have been closer to average but still dry weather," he said.

Conversely, Lake Ontario could reach close to record high levels in the coming months, hydrologists found. Its watershed has experienced wetter weather conditions than other parts of the region, Kompoltowicz said.

Lakes Michigan and Huron, technically one lake, and Lake Erie will continue to get closer to their long-term average water level this year, hydrologists found. They will trend away from the high water records set in 2019 and 2020.

The snow storm that swept through the Midwest last week wasn't strong enough to fuel an increase, said Andrew Gronewold, a hydrologist and associate professor of ecosystem science at the University of Michigan.

"It's really hard to look at any one event, like the one we just had, and map it onto a noticeable long-term change in water levels," he said.

Two factors play a major role in determining Great Lakes water levels, he said: precipitation, which adds water to the lakes, and evaporation, which takes it out.

They might balance each other out in the long term, but Gronewold said Great Lakes levels are expected to fluctuate more between extreme highs and lows as the climate warms.

"Over short time periods, they're not necessarily going to be offsetting each other on yearly or monthly time scales," he said. "That's when we would expect to see big swings in water levels."

Ice started to form on the lakes in January, far behind schedule. It is causing a problem in the St. Clair River, where residents have reported rising water levels caused by ice jams, the U.S. Coast Guard Sector Detroit said Thursday.

The river isn't flooding, but there is an ice plug in the river. The Canadian and U.S. coast guards are working together to break the ice jam.