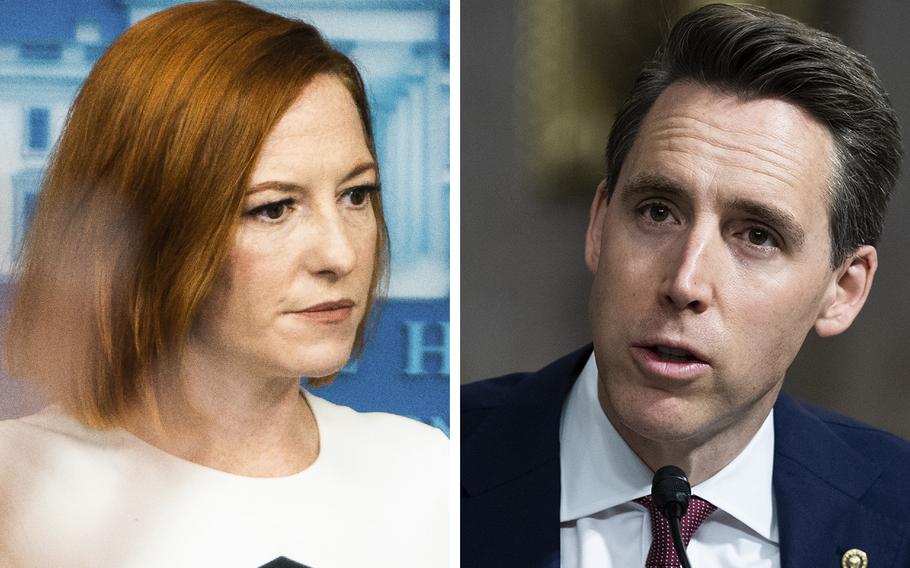 WASHINGTON - The White House on Wednesday pushed back against Sen. Josh Hawley's suggestion that the United States would be worse off if Ukraine were admitted to the North Atlantic Treaty Organization, accusing the Missouri Republican of "parroting Russian talking points."

Ukraine is not a member of NATO, the military alliance of 30 mainly Western countries - including the U.S. - united by a mutual defense treaty. But as Russia once again threatens to invade Ukraine, NATO members have been sending troops and other reinforcements to the region, and the question of the country's potential admission to the alliance has risen to the forefront.

President Joe Biden is dispatching about 3,000 additional service members to Eastern Europe in the coming days, and while he has ruled out any combat deployment to Ukraine, it remains possible that U.S. troops could be directed to assist in the evacuation of American citizens and diplomats from that country.

On Wednesday, Hawley sent a letter to Secretary of State Antony Blinken seeking "clarity about the Biden administration's support for Ukraine's prospective membership in NATO" and arguing that the U.S. should instead focus on countering China.

"The United States has an interest in maintaining Ukraine's independence, sovereignty, and territorial integrity," Hawley wrote. "And we should urgently deliver to Ukraine assistance it needs to defend itself against Russia's military buildup and other threats. Our interest is not so strong, however, as to justify committing the United States to go to war with Russia over Ukraine's fate. Rather, we must aid Ukraine in a manner that aligns with the American interests at stake and preserves our ability to deny Chinese hegemony in the Indo-Pacific."

"Well, if you are just digesting Russian misinformation and parroting Russian talking points, you are not aligned with long-standing bipartisan American values," Psaki said at a regular news briefing.

Those values, she added, are "to stand up for the sovereignty of countries like Ukraine, but others, their right to choose their own alliances and also to stand against very clearly the efforts - or attempts, or potential attempts - by any country to invade and take territory of another country."

"That applies to Senator Hawley, but it also applies to others who may be parroting the talking points of Russian propagandist leaders," Psaki said.

While Republicans in Washington have largely been in agreement on pushing Biden to get tougher against Russian President Vladimir Putin, they differ on the issue of sending U.S. troops to the region. Some, such as Rep. Mike Gallagher, R-Wis., have argued in favor of sending as many as a battalion of troops to Ukraine.

"I think it puts Russia on the defensive," Gallagher told The Washington Post last week. "And if nothing else Russia knows that it would be a massive escalation if they are going against U.S. forces on the ground."

Others, such as Sen. Mike Braun, R-Ind., have voiced opposition to the steps Biden has already taken.

"I am strongly opposed to President Biden's decision to send American troops to Eastern Europe to defend countries that should defend themselves, potentially involving us in another conflict after just ending a 20 year war," Braun said in a statement Wednesday. He added: "President Biden's weakness on the world stage will put more American troops in harm's way just as it did in his disastrous Afghanistan withdrawal."