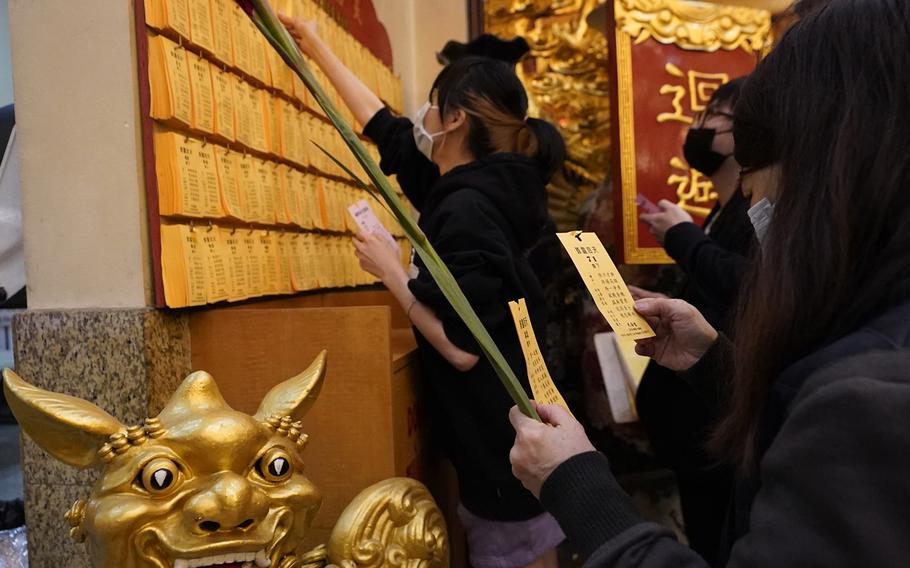 Worshippers pick their divine poems to find their oracles corresponding with the number for the year during the lunar New Year celebrations at the Thien Hau Temple in the Chinatown neighborhood of Los Angeles early Tuesday, Feb. 1, 2022. The celebration marks the Year of the Tiger in the Chinese Zodiac calendar. (Damian Dovarganes/AP)

WASHINGTON — Lunar New Year, being celebrated on Tuesday, could become the United States' newest federal holiday under a bill proposed by Rep. Grace Meng, D-N.Y., a significant step to recognize a day honored by many East Asian communities around the world.

If the measure passes, Lunar New Year would become the 12th federally-commemorated holiday. The count remained at 10 for nearly four decades with the commemoration of Martin Luther King Jr.'s birthday in 1983. That changed in June, when President Biden signed a law establishing Juneteenth as a federal holiday.

Meng, who is Taiwanese American and grew up in Queens, told The Washington Post Tuesday that making Lunar New Year a federal holiday would send a powerful message of inclusion to Asian Americans and non-Asians alike. The bill's prospects are unclear, though Meng said at this early phase she has not run in to pushback.

"It really sends a strong signal to the Asian American community — as the fastest-growing population in this country — that they are valued and seen as [part of] the fabric that makes up this country," Meng said. "It also sends just as an important message to those who aren't Asian American to say, 'Hey, this tradition and this culture is part of America.'"

Meng's bill comes at a complicated time for many Asian Americans: a growing population and coupled with increased activism has boosted Asian American visibility and political power just as a rising tide of anti-Asian sentiment has led to discrimination, isolation and violence against people of Asian descent. Across the U.S., the coronavirus pandemic has also imperiled many Chinatowns, which serve as hubs not only for Chinese Americans but for other members of the Asian community.

Lunar New Year celebrations, while rooted in tradition and culture, have also been important for Asian Americans for economic and political reasons, said Judy Tzu-Chun Wu, a professor of Asian American studies at the University of California at Irvine.

"Part of it was commercial: Chinatowns were really urban slums because Asians weren't allowed to live other places — and the Chinese American community needed an economic lifeline," Wu said. After the Cold War, Chinatowns and their Lunar New Year celebrations were a way for Chinese Americans to share traditions that were culturally Chinese but not tied to Chinese socialism.

Meng said raising the visibility of cultural traditions that are widely celebrated among the Asian diaspora could serve as a counterbalance to the marginalization many Asians and Asian Americans have encountered over the past two years.

"Part of this [bias] is due to the lack of education and understanding about this community that is still too often viewed as foreigners and not truly American," Meng said. "And what's so beautiful about this country is that we can keep learning about other communities, whether they came here generations ago or just recently."

The Lunar New Year Day Act, introduced in the House with 44 co-sponsors, does not designate a specific date for the holiday; Lunar New Year is tied to the traditional Chinese Lunar calendar and falls on a different date each year, typically between late January and mid-February.

The bill was introduced Friday alongside a resolution, "Recognizing the cultural and historical significance of Lunar New Year in 2022."

Meng said the legislation still in its early phases and acknowledged, "it's up to me to convince 51 percent of my colleagues."

In an interview, Meng said the bill is similar to legislation she supported in the New York State Assembly as a state lawmaker: Communities with large Asian populations that observe Lunar New Year saw widespread absences among teachers and students or forced families to choose between school and celebration family and cultural traditions.

"Growing up as a kid in NYC, we always celebrated the Lunar New Year on the night before," Meng said. "We always had to cut short the celebration because our parents didn't want us to go to bed so late because we had to go to school the next day."

Meng's legislation was applauded by Asian American interest groups like the nonprofit Asian Americans Advancing Justice. President John Yang told The Post recognizing Lunar New Year as a federal holiday would not only lift up Asian Americans who have been long been marginalized but would also send a powerful message that the U.S. embraces its diversity.

"I think it's interesting for us to think about how federal holidays, especially recently, have been created and what that means to us as a country," Yang said. "Think about how long it took for MLK Day to become a holiday; and now we all, regardless of party, use that day to reflect on his legacy."

Yang noted the another important aspect of elevating Lunar New Year to a federal holiday would be to dispel the common misconception of Asians as a monolith. Lunar New Year is perhaps the most inclusive term for the celebration, but it is marked by specific names, greetings and traditions in different countries. And while prominent in countries like China, Malaysia, Korea and Vietnam, it's not celebrated in Japan.

"Too often, minority cultures get lost in our society and our stories don't get told," Yang said. "Whenever we have opportunity to tell our stories and tell our narrative — and how that fits into our American culture — we should treat that as a wonderful thing."

Meng, who once had to curtail Lunar New Year celebrations as a child to make it to school the next day, celebrated this year in a way she hopes everyone can come 2023.

"My kids get the day off," Meng said. "Last night we had dinner with my family — and were able to stay up late."