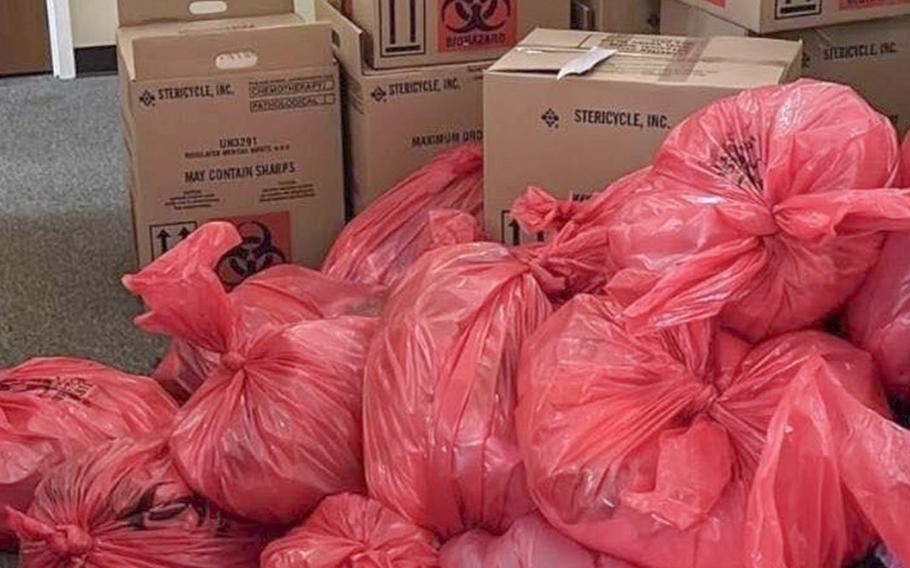 According to a lawsuit filed this week, a coronavirus test clinic allegedly stored samples in red garbage bags for more than a week instead of properly refrigerating them. (Washington State Office of the Attorney General )

Last month, as the omicron variant of the coronavirus spread throughout the United States, a woman in Washington state grew frustrated after waiting five hours for her rapid coronavirus test result. But when she returned to the site, a staffer told her the clinic had lost her result, court records state.

The woman told authorities she got a second coronavirus test at the same Center for Covid Control site. But two hours later, she was told her test result had been misplaced again.

Then, about a minute later, the woman got an email notifying her that she had tested negative for the coronavirus, court records state. The woman went to work the following day but remained concerned about the accuracy of the two tests. She got a third test at a local health department site, according to court records, and that result was positive.

Now, Washington's attorney general is suing the Illinois-based clinic, its laboratory and its co-owners - Akbar Syed and Aleya Siyaj - for allegedly jeopardizing the health and safety of thousands of Washingtonians by failing to meet best medical practices during a pandemic. The clinic, the lawsuit alleges, provided "invalid, false and delayed" coronavirus test results - and at times no results at all. The attorney general's office says the Center for Covid Control operated at least 13 testing sites across Washington, despite having a license to operate in only one municipality.

According to the lawsuit filed this week, the clinic stored test samples in red garbage bags for more than a week instead of properly refrigerating them. Because the samples could not be accurately tested after three days, workers would backdate them so they would still be processed by the lab, Washington authorities said.

"Employees reported that the company instructed them to 'lie to patients on a daily basis' when Washingtonians complained about their delayed results," Attorney General Bob Ferguson, D, said in a news release.

He added: "Center for COVID Control contributed to the spread of COVID-19 when it provided false negative results. These sham testing centers threatened the health and safety of our communities. They must be held accountable."

The center and its founders did not immediately respond to messages from The Washington Post early Wednesday. All Center for Covid Control locations are "closed until further notice," according to a news release from the company.

"CCC is using this operational pause to train additional staff on sample collection and handling, customer service and communications best practices, as well as compliance with regulatory guidelines," the company posted on its website.

Syed and Siyaj, who are married, started the business in December 2020 and expanded it to 300 sites across the United States. The company began operating coronavirus testing sites in Washington in October 2021, court records state. As of Jan. 12, the company advertised free PCR and rapid tests without appointments, the lawsuit states.

According to the 14-page lawsuit, the state received multiple complaints about the company's sites. Several patients reported that the clinic did not stick to basic coronavirus safety protocols - instead, improperly masked workers were observed reusing gloves between patients and failing to properly administer the tests. At times, some patients told authorities, staff members disregarded patients' privacy and announced test results in the presence of others.

The company was also unable to fulfill its promise of delivering PCR test results via email within 48 hours and verbally sharing rapid test results within 15 minutes, the lawsuit states. Former employees told authorities that as of early December, the company was receiving between 8,000 and 10,000 results per day - a figure it knew it could not keep up with, court records state.

When the company did share the results of rapid or PCR tests, the lawsuit states, the reports often were inaccurate. Patients who called back to follow up on their tests results allegedly waited as long as three hours to speak with an operator. At one point, staffers were instructed to lie to patients and tell them their lab results would come back in 24 hours - even if they were unsure when they would be processed, the lawsuit states.

"If a consumer called multiple times, employees were instructed to falsely tell consumers that the test result was inconclusive and that they needed to take another test," the lawsuit states. Doing so also allowed the company, which has allegedly billed the federal government $124 million, to charge for another test, Washington state authorities allege.

The Washington lawsuit is not the only legal action the company is facing. Last month, the FBI searched the company's headquarters in Rolling Meadows, Ill., USA Today reported. The search took place days after the Minnesota attorney general filed a consumer protection lawsuit against the company and its laboratory, alleging that they "provide inaccurate and deceptive" test results and have fraudulently reported negative test results, according to the paper.

The company also is under investigation by the Centers for Medicare and Medicaid Services, part of the U.S. Department of Health and Human Services, the Illinois attorney general and the Oregon Department of Justice.